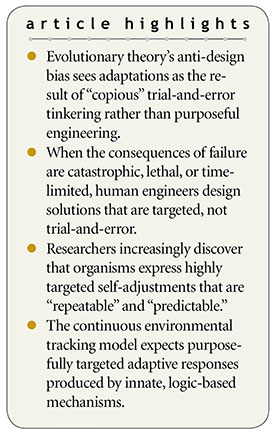 How do you know when evolutionary theory is following the facts or just inventing them? Consider this statement by evolutionary authority Jerry Coyne:

True, the raw materials for evolution—the variations between individuals—are indeed produced by chance mutations. These mutations occur willy-nilly, regardless of whether they are good or bad for the individual.1

Is Coyne summarizing the nature of genetic change based on real observations, or is he reciting a tenet of faith from something akin to “The Evolutionist’s Creed”? Better yet, if scientific evidence is the dog and evolutionary theory is its tail, is the dog wagging the tail or is the tail wagging the dog?

As we saw in last month’s article, evolutionary theory requires accidental, non-purposeful, random variation as the source of adaptive traits.2 This insistence on “chance mutations” continues despite evidence that organisms’ self-adjustments are rooted in highly regulated variation. Why? Because evolutionism is fundamentally an anti-design worldview that opposes the possibility that adaptive biological systems produce purposeful, targeted solutions in response to environmental challenges.

This series of Engineered Adaptability articles assesses the evidence and offers an organism-focused, engineering-based framework of adaptability called continuous environmental tracking (CET). If we observe what organisms actually do and achieve, it appears they continuously track environmental changes and self-adjust with suitable, often epigenetically heritable traits or behaviors that result in adaptation to the new environment. When we use the CET framework to interpret observations on the organism-environment interface, the data indicate that adaptive capacity resides solely within organisms. And adaptation often happens through highly regulated systems with elements that correspond to human-engineered tracking systems.

Coyne may not realize why he insists on “chance” variation, or believes that it’s “willy-nilly” concerning purpose, or how these fit into theory…but Darwin certainly did. Last month’s article noted Stephen Jay Gould’s acknowledgment that Darwin saw the “specter” of directed variation as disastrous to his theory. Gould spelled out three criteria Darwinism requires for genetic variability. Like the tail wagging the dog, evolutionary theory—not evidence—demands that variation be copious, gradual, and undirected.3 All three characteristics convey the notion that trait variations are random and not purposefully engineered solutions targeting environmental challenges. Last month we examined undirected. Now let’s consider copious.

When evolutionary theorist Andreas Wagner says that “over thousands and millions of generations, copy error after tolerable copy error can thus accumulate and slowly change a protein’s amino acid sequence,”4 he’s envisioning—not observing—the wishful evolutionary outcome of copious random genetic variation. Wagner later characterizes this as a “trial and error” process fueled by an overflowing flood of random errors. To evolutionists, a few lucky solutions are source material for potentially innovative biological traits, though Wagner acknowledges that “error” is synonymous with death. His view aligns with Gould’s understanding that evolution requires copious “hecatombs of death as pre-conditions for limited increments of change” in “a theory of ‘trial and error externalism,’”5 which reinforces science philosopher Peter Godfrey-Smith’s understanding that evolution “can be described loosely as ‘trial and error.’”6

The anti-design thrust of evolutionary theory should be obvious. Solutions depicted as trial-and-error or hit-and-miss would mean that evolution “does not work as an engineer works. It works like a tinkerer.”7 In total contrast, engineers can’t accept trial and error when the consequences of failure are catastrophic, lethal, or if time is of the essence. Instead, they design solutions that are targeted, predictable, and repeatable.

Beetles and army ants don’t usually look alike. But if beetles could self-adjust to look, behave, and smell like army ants so they blend in with—and are not eaten by—these aggressive ants, then that would be an amazingly targeted solution to a lethal problem. Two scientists claim that at least 12 times over the last 60 million years, rove beetles have independently mimicked a minimum of eight very different types of army ants.8 Hinting strongly at internal mechanisms that regulate the beetles’ remarkable changes in shape, they propose that the beetles are “poised for myrmecophily [becoming ant-like]” and that “this near-clade-wide preadaptive groundplan may underlie the repeated” ant mimicry. They conclude:

In reconstructing their [rove beetle] evolutionary history, we uncovered evidence of conspicuous, repeated evolution over deep time that runs counter to the notion of evolutionary contingency and represents a new paradigm for understanding the origins of interspecies relationships.8

An ancillary report on their work plainly states that it “provides evidence that evolution has the capacity to repeat itself in an astonishingly predictable way.”9 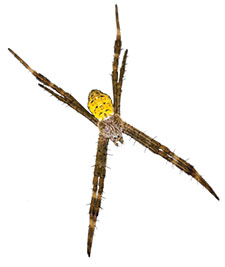 One study showed that some stick spiders demonstrate highly targeted self-adjustments when migrating between different Hawaiian Islands.10 Offspring rapidly speciate after migration, with dark ones living among rocks or tree bark, gold ones amid leaves, and matte-white ones among lichens. In a story with the attention-catching title “Hawaiian stick spiders re-evolve the same three guises every time they island hop,” ScienceDaily reported that “a dark spider that hops from an old island to a new one can diversify into new species of dark, gold, and white spiders before gold and white spiders from the old island have time to reach the new one.”11 This means that new species on the same island that look quite different are more closely related than they are to lookalikes on other islands. The mismatch between predictable self-adjustments and evolutionary theory was noted:

We don’t usually expect evolution to be predictable. But Hawaiian stick spiders of the Ariamnes genus have repeatedly evolved the same distinctive forms, known as ecomorphs, on different islands.11

When identical adjustments occur in the vision of different types of fish so they can see better in murky water, one could interpret that as a targeted solution to a specific challenge. In some sticklebacks, David Marques found that the visual molecule opsin had been “tuned” in a specific way so these fish could fill a “blackwater” niche. Later, the exact changes were found in two other species of spiny-fin fish in dark-water conditions. Marques concludes, “Our study thus supports the emerging view [in evolutionary biology] that mechanisms underlying adaptive evolution are often highly repeatable and likely predictable.”12 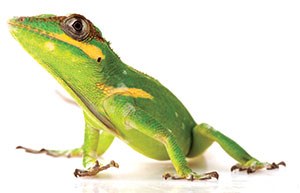 In Brazil, flooding for a reservoir rapidly created five islands that isolated geckos from mainland counterparts and each other. Large geckos went extinct shortly afterward. Within 15 years, each smaller gecko population, males and females alike, ate larger prey and had independently adjusted with equivalent “predictable” and “precise” responses of bigger mouths and heads relative to body length compared to their mainland relatives. The findings “illustrate that populations can respond both rapidly, and in parallel, to ecological change,” the researchers said, noting their findings mirrored those discovered in four different organisms exhibiting “predictable and repeatable morphological change.”13

Hurricanes in 2004 decimated Anolis lizard populations on seven small islands vegetated with plants that have scrawny stems and twigs. Lizard specialist Jonathan Losos from Harvard repopulated the islands with lizards from a nearby large, forested island. Losos said, “Our prediction was that they would evolve shorter legs. And they did. Over the course of four years, average limb length steadily declined on all seven islands…exactly as predicted.” In fact, prior to an intervening hurricane, Losos claims that “all seven islands were evolving in lockstep.”14

Another study found that unrelated pythons and boas express five distinct yet nearly identical morphologies “when they occupy equivalent ecological niches.” These traits were so specific and repetitive for certain environments that they were described as “predictable.”15 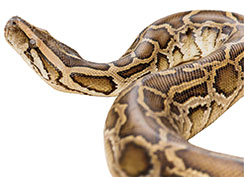 For some vital traits, a higher level of genetic regulation is needed. New findings show that some DNA nucleotides must change in a specific order. Research on independent lineages of common garter snakes found identical changes to the genetics specifying a skeletal muscle ion channel that conferred resistance to a potent neurotoxin made in the skin of a food source, the Pacific newt.16 Given the life-or-death necessity of this adaptation versus evolutionary theory’s trial-and-error solutions, the researchers wondered, “If many conceivable solutions exist to an evolutionary problem, when and why does adaptation proceed through a repeated or predictable route?” Their background investigation highlighted that “repeated outcomes of molecular evolution are attributed to a number of non-exclusive biases in the substitution process of amino acids.” Their similar findings prompted their conclusion that toxin “resistance cannot be achieved unless mutations occur in a particular order,” adding that “a growing list of empirical studies point to the importance of sequential order in the mutational route to adaptation.”16

An adjunct article titled “Know your poison: Predictable molecular changes confer toxin resistance in snakes” points out the discrepancy of these results with evolutionary theory, “since molecular mutations are assumed to be largely random” and should not “occur more frequently than would be expected by chance,” yet we find “identical amino acid substitutions at the same locus in unrelated taxa.”17

The technical journal Nature posted an intriguing report on E. coli research titled “Predictable evolution trumps randomness of mutations: Separate bacteria populations may respond to environmental changes in identical ways.” Like with the garter snakes, bacteriologists observed new traits appearing in a particular order among independent populations. After reporting on the genetic basis of these changes, however, the report simply absorbed the incongruent findings into evolutionary theory:

Although mutations, the driver of evolution, occur at random, a study of the bacterium Escherichia coli reveals that nature often finds the same solution to the same problem again and again….The DNA showed that in some cases identical mutations appeared independently in all three test tubes.18

Researchers are taken aback when they find an adaptable solution that can “repeat itself in an astonishingly predictable way.” Such a situation “runs counter to the notion of evolutionary contingency” because it involves “mechanisms underlying adaptive evolution [that] are often highly repeatable” through programming that may be “poised for myrmecophily [becoming ant-like]” by a “preadaptive groundplan.” These experimental results clearly contradict the notion that adaptive genetic and epigenetic variability are generated or fractioned out by processes of trial-and-error tinkering.

However, finding targeted adaptive outcomes that are repeatable and predictable strongly suggests purposeful responses by non-random, logic-based mechanisms consistent with the CET framework. Recall the experience of “junk DNA.” Researchers found true regulatory functions in isolated segments of DNA that had been labeled “junk.” More exceptions prompted them to explore further…which uncovered a torrent of new functions.19 Consistent with CET, we expect that as researchers start looking for them, more targeted, repeatable, and predictable adaptive responses will be discovered.