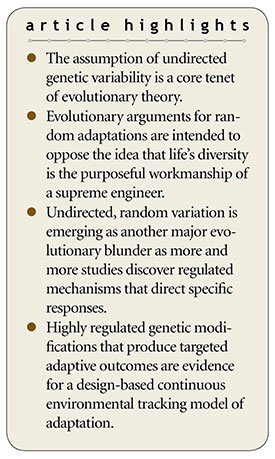 Suppose you were in a game show with $100,000 riding on how well you match the top three responses to this question: “What word means the opposite of designed?” You might have a good chance of winning if you say random, accidental, or unintentional.

If you also found these same words characterizing a scientific theory about how living creatures originated, then you might conclude it was an anti-design explanation—and you would be right. Darwinian evolution has been summed up in just that way. In a refreshingly clear statement about evolution in 1995, the National Association of Biology Teachers (NABT) said:

The diversity of life on Earth is the outcome of evolution: an unsupervised, impersonal, unpredictable and natural process of temporal descent with genetic modification that is affected by natural selection, chance, historical contingencies and changing environments.1

The NABT’s 1995 position left no room for a supervised evolutionary process as embraced by theistic evolutionists and definitely ruled out the intelligent design of organisms. If someone visited the NABT website today, they’d find that the current position statement on evolution is far less candid about what evolutionary ideas imply than what evolutionists actually advance in their classrooms. Unlike position statements, evolutionary theory has not changed. Evolutionary literature still stresses the theory’s bedrock characteristics of unpredictability and randomness:

A classical or Darwinian evolutionary system embodies a basic principle: purposeless genetic variation of reproductive individuals, united by common descent, coupled with…natural selection of those rare individuals that fortuitously express the traits that complement or thwart the contemporary selective pressures or constraints. It’s a process replete with chance.2

But, it is far easier to claim that adaptable processes are non-purposeful (i.e., random with respect to a goal) than back it up with scientific evidence. Even descriptive terms that may be construed as somewhat synonymous with random—like unsupervised, impersonal, and unpredictable—all mean different things. Since evolutionists lack a test to demonstrate that evolution is unsupervised and impersonal, the NABT dropped those terms. What test can rule out an underlying purpose for biological processes? Just because people can’t currently predict a biological outcome doesn’t necessarily mean it happens randomly. What is, therefore, driving this fixation on randomness?

The Intent of Evolutionary Randomness Is to Refute Design

Given that engineering design and purposefulness are inseparably linked, assertions that life’s diversity arose from non-purposeful processes are intended to be a highly specific refutation of claims that living things were intentionally designed.3 This underlying philosophical intent of evolutionary theory rests on a core assumption that life evolves in a purposeless manner. Note how British evolutionist Helena Cronin affirms both the intent and the assumption:

All this apparent design has come about without a designer. No purpose, no goals, no blueprints. Natural selection is simply about genes replicating themselves down the generations. Genes that build bodies that do what’s needed—seeing, running, digesting, mating—get replicated; and those that don’t, don’t.4

But without evidence that adaptive genetic variation is fully random or that adaptive processes are random with respect to a goal, bold assertions like Cronin’s come across more like pulpit-pounding declarations that strongly point to an anti-intelligent-design motive.

On the other hand, if organisms express adaptations that are repeatable and predictable, this would strongly suggest they have internal processes that are controlled by nonrandom, logic-based mechanisms, which is an outcome more consistent with design than evolution. And this is what researchers actually find—repeatable outcomes of traits targeted to solve environmental challenges. These findings are a threat to Darwinian evolutionary theory but are strong support for the continuous environmental tracking (CET) framework being developed in this article series.

Stephen Jay Gould’s The Structure of Evolutionary Theory uses concepts and assumptions from evolutionary literature to build a theoretical framework. Within Darwinism, he identified three criteria for genetic variability, stating, “Variation, in short, must be copious, small in extent, and undirected. A full taxonomy of non-Darwinian evolutionary theories may be elaborated by their denial of one or more of these central assumptions.”5

The most important criterion is undirected variation. Gould emphasized that wholly unbiased variation is fundamental to evolutionary theory, going on to say, “In a sense, the specter of directed variability threatens Darwinism even more seriously than any putative failure of the other two postulates [copious, small in extent].” He clarifies the meaning of directed variation as “adaptive pressures [that] automatically trigger heritable variation in favored directions.” Automatic triggers that lead to specific responses sound a lot like the outcomes and system elements associated with human-engineered systems, and thus, “Darwin clearly understood the threat of directed variability to his cardinal postulate of creativity for natural selection.”5

Non-purposeful adaptive variability is a foundational assumption of the evolutionary theory known as the modern synthesis (MS). Therefore, to avoid the specter of a design-based explanatory threat to natural selection:

The core tenet of the MS is that adaptive evolution is due to natural selection acting on heritable variability that originates through accidental changes in the genetic material. Such mutations are random in the sense that they arise without reference to their advantages or disadvantages.6

If the specter of directed variability threatens Darwinism, then the abundant findings of highly directed genetic variability is a dreadful prospect for some evolutionists. Consider how one study found that some yeast show a highly specific response to toxic levels of zinc by regulating an increase in genetic variability. The study’s researchers recognized that their findings clash with evolutionary theory:

The assertion that adaptation occurs purely through natural selection of random mutations is deeply embedded in our understanding of evolution. However, we have demonstrated that a controllable mechanism exists in yeast for increasing the mutation rate in response to at least 1 environmental stimulus and that this mechanism shows remarkable allele selectivity.7

They added that “evidence for adaptation through genome-wide nonrandom mutation is substantial.”7

Actually, in a much earlier paper titled “Evidence for the Adaptive Evolution of Mutation Rates,” David Metzgar and Christopher Wills highlighted nonrandom genetic variance, which they also noted was contrary to orthodox evolutionary theory.8

A clarification of the word mutation may be needed. The common understanding of mutations is random mistakes in DNA. Mutations are seen as undesirable since they can cause diseases. Abundant references to mutations tend to reinforce “random genetic variation” within the public mindset. This, as we saw, is a core tenet of evolutionary theory. But, evolutionary reports could just be using the basic technical meaning of mutation, which is any type of change in DNA. People may be surprised to start hearing about “directed mutation” because in their minds these words are contradictory. Evolutionists could call these new findings “regulated genetic modification,” but saying “nonrandom mutation” fits better with their anti-design agenda.

However, regulated genetic modifications are how many genetic changes should be classified—for instance, the regulated movement of defined segments of DNA called mobile genetic elements. The activation of mobile elements causes a type of genetic instability with specific adaptive outcomes. University of Chicago geneticist James Shapiro explains that “there is now an extensive literature on the great diversity of challenges and stress factors that activate genome instability...[which] include nutritional deprivation, intercellular signaling molecules, exposure to toxic substances” that couple DNA restructuring by mobile genetic elements to transcription. Shapiro details how this is not a random occurrence but highly specific, since “there is no question that cells have the ability to target transcription to particular sites in the genome as part of a biologically adaptive response to external and internal circumstances.”9

Another mechanism directs genetic variability by regulating specific signaling pathways to rapidly amplify the action of DNA that codes for a protein-making machine called a ribosome. The researchers of this mechanism said:

Here we show that signaling pathways that sense environmental nutrients control genome change at the ribosomal DNA. This demonstrates that not all genome changes occur at random and that cells possess specific mechanisms to optimize their genome in response to the environment.10

When findings anomalous to current theory grow too numerous, at some critical point the inconsistencies must be addressed. An international conference titled On the Nature of Variation: Random, Biased and Directional was held at the University of Lisbon, Portugal, in October 2017. The conference aimed at “critically evaluating the rationale behind” evolutionary assumptions about “variation randomness in the light of new developments.” The topic for reevaluation on center stage was “the claim that natural selection provides a sufficient explanation for the evolution of most traits, [which] pervades all aspects of biological thinking. The underlying assumption supporting adaptationism is that variation is somehow random, namely, that it is neither biased nor directional.” They seriously questioned: “Why was variation characterised as random in the first place?...How useful is the doctrine of variational randomness? And how should it be characterised?”12

Asking why variation was characterized as random in the first place seems somewhat disingenuous since they could ask fellow evolutionists like the NABT or Helena Cronin, who would say, “No purpose, no blueprints, no design.” Materialists know that evolutionary emergences that are random with respect to a goal are a key argument against viewing life’s diversity as the purposeful workmanship of a supreme engineer. That’s why undirected genetic variability is a core tenet of evolutionary theory, not just an easily abandoned corollary. But if the materialistic assumptions of random variability and of living organisms not being the product of engineering are wrong, then it was only a matter of time before real observational data would cause the whole randomness notion to blow up. The Lisbon conference seems like an attempt by evolutionists to distance themselves from a crumbling idea, especially given that the randomness of genetic variation was never demonstrated scientifically but was only a theoretical assumption that has been imposed on interpretations of data.

The unequaled workmanship of the Lord Jesus Christ in crafting living things is clearly seen in how they are engineered to rapidly self-adjust to changing conditions.

The CET model provides the clearest explanation for what we observe. If organisms continuously track environmental changes with mechanisms that correspond to elements in human-engineered tracking systems, then regulated genetic modifications are an expected outcome. Without question, the unequaled workmanship of the Lord Jesus Christ in crafting living things is clearly seen in how they are engineered to rapidly self-adjust to changing conditions.