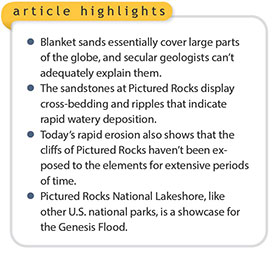 Pictured Rocks National Lakeshore lies a few miles east of the town of Munising, Michigan, along one of the most scenic shorelines in the United States. America’s first national lakeshore, it was established on October 15, 1966.1 The park has waterfalls and exposures of massive sand dunes, but it’s best known for its nearly vertical multicolored sandstone cliffs that rise 50 to 200 feet above Lake Superior. And it turns out these stunning cliffs connect with similar rocks around the world.

The Pictured Rocks are known for their colored and stained sandstone cliffs. Different minerals give the rocks their various colors. Copper colors them blue or green, iron paints them red or orange, and manganese blackens them. Waters moving underground and discharging create these colors on the exposed cliffs. 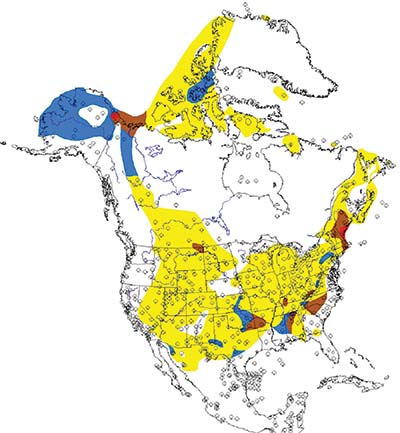 Nearly 500 miles from the Atlantic Ocean, the Pictured Rocks spectacularly expose some of the earliest Flood sediments, especially sandstones.2 Called the Munising Formation in Michigan, this same sandstone can be observed across much of the U.S. (Figure 1). It’s called the Tapeats Sandstone in Grand Canyon. Because of its great extent and relative thinness, usually less than a few hundred feet, this sand layer is known as a blanket or sheet sand.

Blanket sands are widespread, thin sandstones spread over large portions of continents. Most are composed of pure, well-rounded quartz grains that contain almost no shale. Uniformitarian geologists have tried to explain their presence for decades and have failed to develop a satisfactory answer.

Some evolutionary scientists have invoked strange conditions that currently exist nowhere to try and account for these blanket sands.3 Others have claimed that the exact same conditions had to exist at the same time across much of the continents for many millions of years despite the diverse geological environments seen in today’s world. Pure, thin sandy layers that blanket the continents should not exist on an old earth.

But we have a better solution. ICR’s science staff explains this vast sandstone layer as a consequence of the global Flood. The sandstone is the basal layer of the first megasequence, known as the Sauk Megasequence, that inundated parts of all the continents of the world.2 We have found that this same sandstone layer exists across the globe. It often coincides with the so-called Cambrian Explosion, where fossils representing most animal phyla suddenly appear in the rock record, further matching the Flood narrative.

Deposition of Sandstones in the Early Flood

The continental-scale blanket sandstones that the Pictured Rocks (Munising Formation) represent were deposited on top of another, less-extensive sandy layer known as the Jacobsville Sandstone. This purple-colored sandstone is visible above the lake level in some parts of Pictured Rocks National Lakeshore. How and when did these layers get here?

Again, the Flood provides the answer. The Jacobsville likely formed in the earliest moments of the Flood as the Midcontinent Rift was bursting open. The Midcontinent Rift represents a tear within the crust of the North American continent running from Michigan in the north to Kansas in the south. Although the rift is only about as wide as the Red Sea, it contains stacked lava flows totaling up to 18 miles thick.4

Rift activity probably began when “the fountains of the great deep were broken up.”4 Tremendous volumes of black lava extruded from this rift, which can be seen in the Keweenaw Peninsula of Michigan. The center of the rift created the space for today’s Lake Superior. Similar rifting occurred worldwide. The sandstones of the Jacobsville and other sediments were deposited along the rift’s edges.

Both the Munising Formation and the Jacobsville Sandstone contain clues that indicate rapid watery deposition during the Flood. These sandstones exhibit stacked layers of cross-bedding, and many surfaces contain ripple marks. These features come from fast-moving shallow waters. The bottom layer of the Munising is known as the basal conglomerate due to its coarse pebbles of rounded quartz and chert.1 Since it takes more force to move larger grains, pebbles indicate even higher-energy deposition at the base of the Sauk Megasequence.

Why are the sandstone cliffs so prominent along the lakeshore? Part of the reason is that the cliffs follow natural vertical fractures in the sandstones that parallel the shoreline.1 But the presence of sheer cliffs also indicate a youthful origin for the landscape. Again, the recent Flood provides the best solution.

Nearly every year, large chunks of the exposed sandstone break off and fall into Lake Superior.1 In 2006, one of the “towers” of the iconic Miner’s Castle fell into the lake. Wave erosion and freeze-thaw activity expand the natural fractures and cause rock falls, some of which are huge.

The persistence and rapidity of this process is recorded in the numerous rock falls over the historic period, most notably the collapse of Grand Portal Point in 1900. The largest recent event occurred on July 29, 2010, and was captured with a digital camera by professional photographer Lou Waldock from a Pictured Rocks cruise boat.5

This rapid erosion indicates these rocks have not been exposed for eons. Mass wasting observed over the last 100 years provides proof. If the Pictured Rocks were exposed for tens of thousands of years or longer, there would be few cliffs left and likely no waterfalls either. If these cliffs are only a few thousand years old, then no wonder we still get to enjoy their beauty.

The sandstones of the Pictured Rocks fit perfectly in the Flood narrative. They were deposited as part of a massive worldwide rise in the ocean level (Sauk Megasequence). They exhibit structures like ripples and cross-beds, demonstrating their deposition in high-energy water. And the cliffs look young. 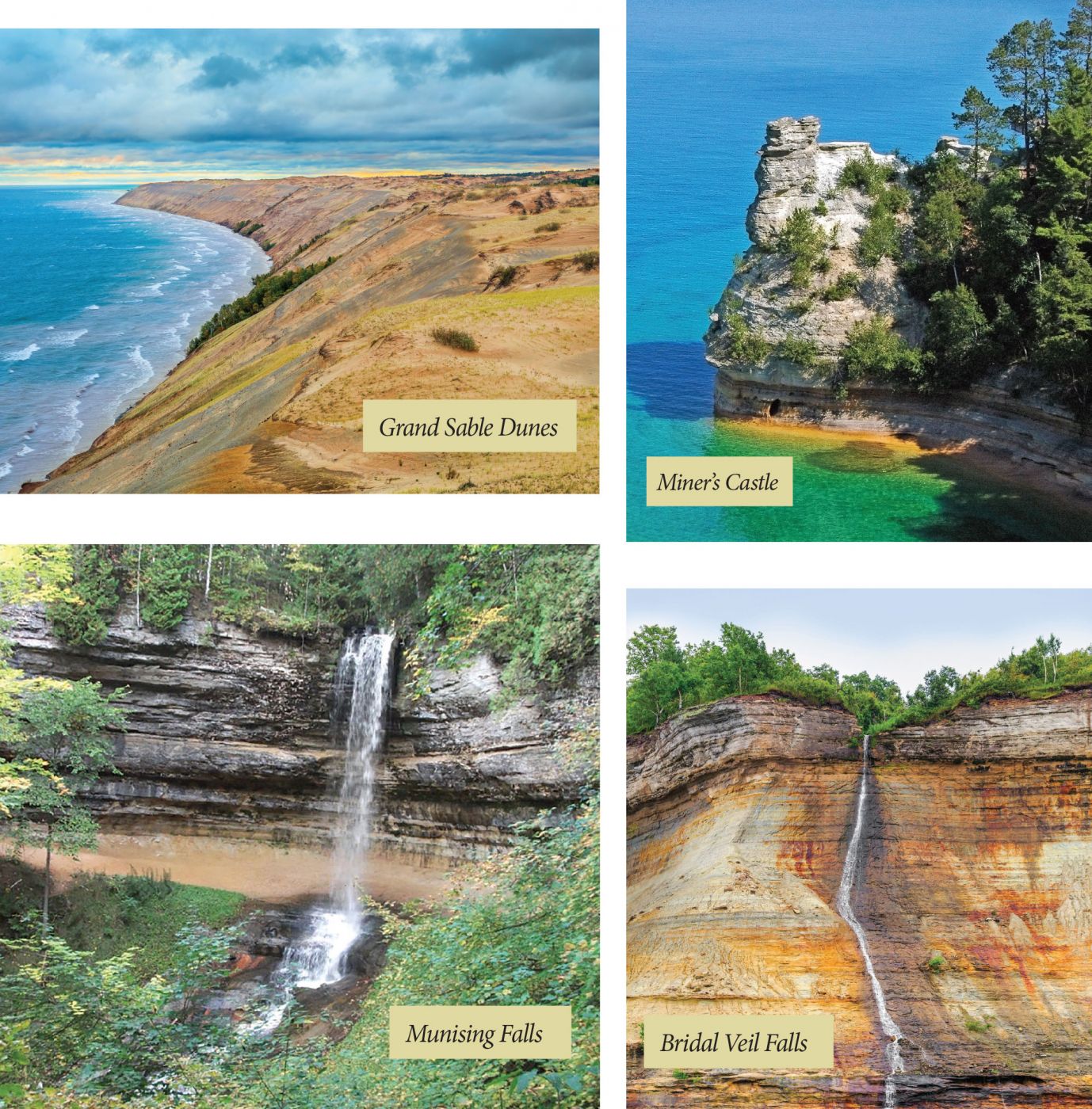