The Milankovitch, or astronomical, theory is the dominant secular explanation for the dozens of ice ages said to have occurred within the last few million years. According to this theory, subtle changes in the seasonal and latitudinal distribution of sunlight trigger ice ages. These sunlight changes are thought to be caused by slow, gradual changes in Earth’s orbital and rotational motions. Although the Milankovitch theory has many problems, it is today widely accepted largely because of an iconic paper titled “Variations in the Earth’s Orbit: Pacemaker of the Ice Ages.”1,2 This month marks the 40th anniversary of its publication.

This article—the second in a series of three—presents further evidence that the Pacemaker paper is invalid. I encourage readers who may have missed Part 1 of this series to read it online since this article builds on that information.3

The Pacemaker paper convinced many uniformitarian scientists that the Milankovitch theory is correct. The paper’s authors analyzed chemical wiggles from two Indian Ocean sediment cores (Figure 1). Specifically, scientists calculated a quantity called the oxygen isotope ratio from the shells of microscopic organisms buried in seafloor sediments. The oxygen isotope ratio, denoted by the symbol δ18O, is seen as an indicator of global climate, with high δ18O values within the sediments indicating ice ages, or glacials, and low values indicating warmer interglacials.

Assigning Ages to the Sediments 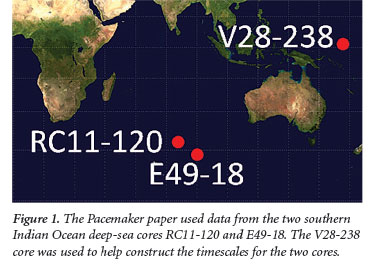 Before performing their analysis, the Pacemaker authors had to assign tentative ages to the sediments within the two cores. Because radioisotope dating methods cannot generally be used on seafloor sediments, the authors used an indirect method. Information about Earth’s magnetic field is “recorded” when lava hardens into rock. Based on radioisotope dating of volcanic rocks, uniformitarians had concluded that the most recent reversal of Earth’s magnetic field, the Brunhes-Matuyama (B-M) magnetic reversal, occurred 700,000 years ago. This magnetic reversal was also recorded within the sediments of a long western Pacific core designated as V28-238 (Figure 1). These scientists assumed that sediments within the V28-238 core were deposited at a nearly constant rate for hundreds of thousands of years. Then they used this assumption to assign ages to features within the core’s oxygen isotope “wiggles.”4 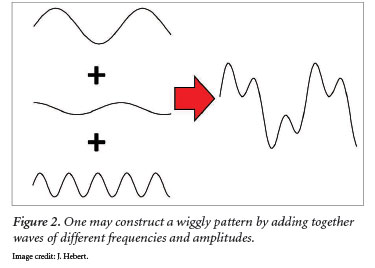 When one plots oxygen isotope values within a core as a function of depth, many wiggles are readily apparent. Because this oxygen-isotope pattern is wiggly, it’s not hard to imagine that one could construct that pattern by adding together many waves (which are themselves wiggly patterns) of different frequencies and amplitudes. By adding together different waves in just the right combinations, one can construct all kinds of complicated patterns (Figure 2).

A method called spectral analysis enables scientists to examine a pattern like the one shown on the right of Figure 2 and “reverse engineer” it. The result of a spectral analysis is a graph showing prominent peaks at the frequencies of the waves making the biggest contributions to the signal. The Pacemaker authors used a technique of spectral analysis called the Blackman-Tukey (B-T) method.5 After applying the B-T method to the wiggles within the two sediment cores, they observed prominent peaks at frequencies corresponding to cycles of about 100, 42, and 23 thousand years. Because these were close to the lengths of inferred cycles in Earth’s orbital and rotational motions, uniformitarians thought the Pacemaker paper confirmed the Milankovitch ice age theory.

However, around 1990 secular scientists revised the age of the B-M reversal upward to 780,000 years (780 ka).6,7 This 80,000-year age revision begs the question: If one were to re-perform the Pacemaker calculations after taking this change into account, would the results still support the Milankovitch theory?

The Pacemaker authors performed spectral analysis on two other variables in addition to the δ18O data. Although data from the RC11-120 and E49-18 cores are available online, these newer data sets differ somewhat from the original values shown in the Pacemaker paper. I attempted to contact the two surviving authors of the paper, but to the best of my knowledge they did not respond to my request for their original data. Therefore, in order to re-perform the analysis, I had to reconstruct the original data by painstakingly reading the numbers off of Figures 2 and 3 in the Pacemaker paper.8 I then used the B-T method and my reconstructed data to reproduce the original Pacemaker results.9 I encourage readers to examine Figures 9-17 in my second paper and to compare them with the nine charts in Figure 5 of the original Pacemaker paper. There is generally remarkably good agreement between my results and theirs, and these results can be viewed online.10,11

This gave me confidence that I understood the B-T method well enough to re-do the calculations after taking into account the new age for the B-M reversal. Re-doing the calculations led to a bombshell result: the results no longer provide convincing evidence for the Milankovitch theory. 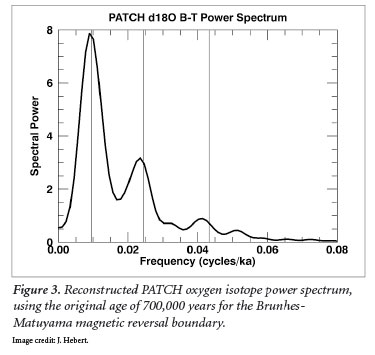 In Figure 3 I have reproduced the original PATCH results from the Pacemaker paper, obtained using the same method as the Pacemaker authors. The only difference is that I increased the resolution of the graph (allowed by the B-T method, according to experts12) and have zoomed in on the pertinent part of the power spectrum so you can see the results more clearly. The vertical lines indicate the expected orbital frequencies that were listed in the Pacemaker paper. The fact that the three prominent spectral peaks line up with the vertical lines means there is good agreement between the results and the expectations of the Milankovitch theory. 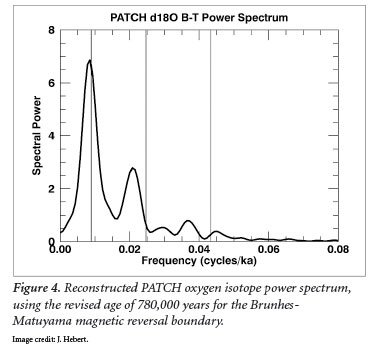 However, Figure 4 shows the PATCH results after taking into account the revised age of 780,000 years for the B-M magnetic reversal boundary—the age that secular scientists themselves now claim is the correct age of this boundary. The adjusted peaks in Figure 4 are slightly narrower than those in Figure 3 for reasons I explain in my third paper.13 Because this revised age changed the timescales assigned to the two cores, it was necessary to re-calculate both the new frequencies predicted by the Milankovitch theory and the new power spectrum results for the PATCH core. After doing so, two out of three of the vertical lines no longer align with the peaks—the results no longer agree with Milankovitch expectations.

A Cause and Effect Problem?

Worse yet, the revised age of 780 ka for the B-M magnetic reversal boundary seems to present a significant cause and effect problem for the Milankovitch theory. The theory can be used to predict not just the lengths of the climate cycles, but also the approximate times at which ice ages end and interglacials begin (and vice versa). These times are approximate because uniformitarian scientists have to estimate how long they think it will take the climate to respond to changes in sunlight distribution caused by changes in Earth’s orbital motions. One can use the age of the B-M reversal boundary to estimate the times of these transitions, which are known by specialists as marine isotope stage (MIS) boundaries, discussed in Part 1 of this series.3

When one uses the old age of 700 ka for the B-M reversal boundary to calculate the ages of the MIS boundaries, there is fairly good agreement between the calculated ages and the ages expected from the Milankovitch theory, at least for the 12 most recent MIS boundaries. However, when the ages of the MIS boundaries are calculated after taking into account the revised age of 780 ka for the B-M reversal boundary, nearly all the calculated times occur before the times predicted by the Milankovitch theory. Seven of these ages are at least 27,000 years too early, and one is a whopping 67,000 years too early!13 If changes in Earth’s orbital motions are influencing Earth’s climate, then why would the climate change tens of thousands of years before those orbital changes occurred?

Why Did No One Notice?

Some may find it hard to believe that the results from such a well-known paper could be invalid. After all, wouldn’t secular scientists have noticed if this were really the case? Not necessarily. The Pacemaker paper never explicitly mentioned the age of the B-M magnetic reversal. Instead, the paper referred back to another paper published in 1973.4 It’s only this 1973 paper that presents the details of the method used to obtain ages for the MIS boundaries. Unless one has read this 1973 paper, one will not really understand how those age estimates were obtained. Apparently, most uniformitarian scientists have not read this paper!

Unfortunately, the B-T method, which the Pacemaker authors used to obtain their results, is generally not well known. For this reason, I have carefully explained this method in my second research paper.9 Although the paper is technical, non-specialists with an understanding of calculus should be able to follow the argument, provided they are willing to invest the necessary time. I encourage Acts & Facts readers who have such a background to examine this subject in more detail. Even for readers without such a background, it should be obvious from the figures in my third paper (similar to Figures 3 and 4 here) that the new results generally do not agree with Milankovitch expectations.13

These results have tremendously important implications for uniformitarian dating methods, as well as the global warming/climate change debate, and these are the subject of next month’s article, the third and final of this series.