In Charles Darwin’s On the Origin of Species, he claimed that “natural selection acts only by taking advantage of slight successive variations; she can never take a sudden leap, but must advance by short and sure though slow steps.”1 Mainstream evolutionary thinkers accept Darwin’s premise, but have the 150 years of fossil discoveries since publication of the 4th edition of Origin revealed gradual evolution? Two recently found fossils offer a test.

If evolution occurred, textbooks and museums should abound with examples showing fossil A in lower sedimentary layers, fossil B in upper layers (or with still-living counterparts), and many slight, successive variations of fossils between them. Fossils should clearly show evolution from A to B. Why do textbook writers overuse old and long-disproven fossil illustrations of evolution instead of regularly supplying freshly discovered A-to-B transitional fossils? Many fossils don’t fit this Darwinian prediction.

In May 2016, researchers described an odd-looking, short-snouted, long-tailed ichthyosaur relative from Anhui Province, China. Ichthyosaurs were roughly dolphin-shaped marine reptiles. Discoverers dug the fossil from Spathian layers, some of the lowest sedimentary layers that have ichthyosaur fossils. Where were the intervening layers that show graded steps between the more familiar long-snouted, short-tailed ichthyosaurs and this new oddball? Nowhere. Both varieties occur almost side by side.

The researchers who described the new fossil said, “Given that the fossil record of Ichthyosauromorpha is unlikely to extend back to the Smithian…, their evolution likely proceeded very rapidly in the early-mid Spathian.”2 How does “very rapidly” compare with Darwin’s “slow steps”? 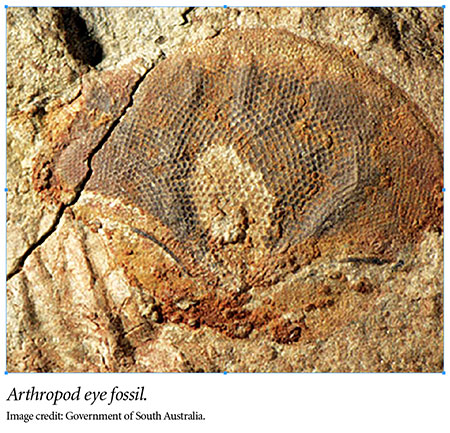 With no mention of “slow steps” in fossilized arthropod eyes, the research team wrote, “The new fossils reveal that some of the earliest arthropods had already acquired visual systems similar to those of living forms, underscoring the speed and magnitude of the evolutionary innovation that occurred during the Cambrian Explosion.”3,4 How would the man who asserted that evolution “can never take a sudden leap” have reacted to this “speed and magnitude of the evolutionary innovation”?

These two examples mirror hundreds of others, but any example of a sudden leap refutes Darwin’s “slow steps” assertion. Can a different origins model better explain fossil facts? The creature traits that evolutionists suggest evolved so rapidly, God may have created instantly. Or God-given biological systems may have produced trait variations within creature kinds.5 Creation explains the abrupt appearance of precise designs in living things, and the Flood explains how creatures got locked in rock layers—frozen as fossils for us to examine.