The Deep Down Under project explores "relict faunas," living creatures with eerily similar counterparts among some of the world's oldest fossils.1 Deep-sea researchers used a remotely operated vehicle (ROV) to look for life around Osprey Reef off Queensland's coast. They found some surprises including animals known only from faraway places and long-gone times.

The University of Bremen's Centre for Marine Environmental Sciences supplied the ROV, which took photographs, some videos, and even several specimens of the bizarre sea life in that region. Robin Beaman, Marine geologist from Australia's James Cook University, participated in the research. He told the Australian Broadcasting Corporation (ABC), "We found coral reef fish that had only ever been found in Tahiti."2 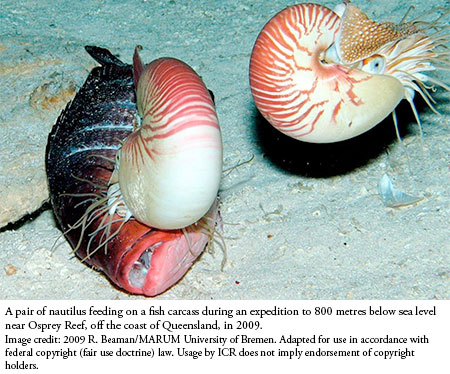 Their ROV also captured an image of a chambered nautilus, with its beautifully curved shell, scavenging a fish carcass. Some of the lowest layers of sediments with any kind of fossil—called the Cambrian System, supposedly some 500 million years old—have virtually identical fossil shells.

The ROV also imaged a sea lily living on the deep-sea floor. This amazing creature captures nutrients from five fan-shaped extensions attached to the top of a long stem. Many geologic layers—including Cambrian layers—preserve these same sea lily stems as fossils. Their shapes resemble a stack of tiny lifesavers candies.

The evolutionarily accepted time span for Cambrian sediments, and thus the timespan encompassing creatures fossilized within these sediments like crinoids and nautiluses, ranges from 485 to 541 million years. How could chambered nautiluses and sea lilies (crinoids) fail to evolve over half a billion years?

In 2014 a separate team discovered a strange, new mushroom look-alike seafloor creature off the coast of Australia. Called Dendrogramma, it resembled fossils found below Cambrian rocks, and thus deposited even earlier.3

Beaman told ABC, "These are relict animals that have existed through millions of years because they're in this nice stable environment."2 Storms that ravage sea surfaces present constant challenges to survival that some imagine can drive one kind of creature to evolve into another. Supposedly, placid places in the ocean's depths can somehow keep creatures from evolving into different kinds over countless spans of time.

However, evolutionary geology teaches that sea floors were completely replaced hundreds of millions of years after the Cambrian rocks were laid.4 So, even according to evolutionary world history, the sea floor of long ago was not the "nice stable environment" seen today. The sea floor rifted and subducted, thickened and flattened, slid and slowed, rose and sank. Flood geologists acknowledge these processes happened fast, as part of the Earth-reshaping violence accompanying Noah's Flood year.5

If Noah's recent Flood deposited Cambrian rocks and fossils, then the creatures they recorded would have had no time to evolve. No wonder they look just the same in today's mysterious ocean depths.

Image credit: B. Thomas. Adapted for use in accordance with federal copyright (fair use doctrine) law. Usage by ICR does not imply endorsement of copyright holders.