A resident of Vladivostok, which is sandwiched between China, North Korea, and the Sea of Japan, was adding ordinary coal to a fire when he noticed a shiny metal object peeking through a piece of the friable black rock.1 The portion that protruded looked suspiciously manmade, so he investigated by enlisting the help of nearby scientists.

The Vladivostok resident, Dmitry, found embedded in his coal a shiny metal bar with teeth, like those of a bar or plate gear built to mesh with the teeth of a wheeled gear. 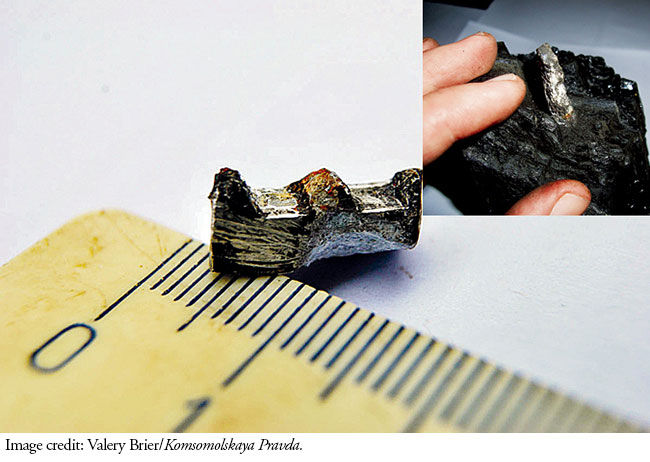 The Pennsylvanian coal came from the Chernogorodskiy mines from the Khakasis region north of Mongolia.2 According to international Russian news source Komsomolskaya Pravda, biologist Valery Brier helped analyze the odd-shaped object. X-ray diffraction revealed that it was mostly aluminum with about two to four percent magnesium. This unique alloy is not generally produced today. And Brier noted that refined aluminum implies high technology.3

An object like this that's embedded in supposedly ancient coal is so difficult to explain from the long-ages perspective that some speculate ancient intelligent aliens left it on earth in some bygone era. This desperate suggestion presumes that the coal's age assignment is true. One might as well say that the reptiles from which dinosaurs supposedly evolved, whose remains occur in some rare Pennsylvanian outcrops, were smart enough to smelt and cast metals.

However, there are plenty of documented, though not widely known, reasons why the methods used to date ancient earth materials are faulty.4 In fact, when "300 million year old" coal is examined for carbon, it routinely returns measurable radioactive carbon-14, which would have disappeared by radioactive decay in under 90,000 years.5

Also, the Bible's historical information documents a world that is only thousands of years old. In this context, deeply buried coal deposits were produced by the historical Flood of Noah.6 The people who were alive back then could have provided coal-embedded artifacts. Apparently, this one from Russia is not the first.

In the 1940s, a boy in West Virginia found a bronze bell encased in coal that he was shoveling into his home's furnace. Like the aluminum gear, this metal was a unique brassy alloy.7 A similar anecdote alleged that the late Frank Kanard, who had his written testimony notarized, extracted an iron cup with opposing pour spouts from a large lump of Pennsylvanian coal in 1918 while fueling his furnace in Oklahoma. Like with the Russian coal, most secular scientists consider Pennsylvanian rocks to be about 300 million years old.

Maybe some ancient coal melded around a piece of modern machinery from Khakasis. Maybe an old explorer dropped an even older bronze bell down a well for miners to later extract from the mountains of West Virginia. And it is perhaps conceivable that coal somehow enveloped a more recently manufactured iron cup. These and other apparent human artifacts embedded in coal need more investigation.

And such investigations should include the possibility that these artifacts were produced by people who lived at the same time that vast forests were catastrophically buried to become coal. Scripture states that expert metal workers lived among the pre-Flood peoples, for example.8 In any case, the Bible certainly makes more sense of these odd artifacts than stories of aliens. Future research may show that biblical history even makes more sense than stories of lately-added artifacts to deeply-buried coal seams.