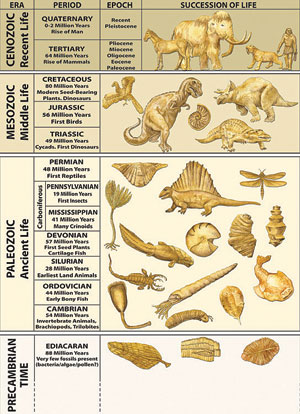 The geologic column—that presentation of the rock record that places rock strata into various ages—can be intimidating. Because it seems authoritative and we see it so frequently, we sometimes place more faith in it than it actually deserves.

Without a doubt, rocks and rock strata can be characterized by placing them on the column. While many incorrect notions are imbedded in this diagram (most particularly the “absolute” ages given), rock layers really do usually line up the way the drawing presents them. This visual illustration can be a useful tool, especially when considering one rock’s age “relative” to another. But the rock layers are frequently dated by their fossil content, arranged in the erroneous evolutionary order. How much credence should the Christian creationist place in it?

It might help to consider the rock layers in Grand Canyon, since they are so well known and studied in creationist literature. Obviously, the layers rest one on top of another, with no gaps between them. Schematic drawings present them this way, but while the layers are dated consecutively, they are not dated one right after the other. Often there are lengthy time gaps postulated between the layers. The rock record of those time periods is missing. These gaps, called “unconformities,” represent either a period of non-deposition or of erosion. 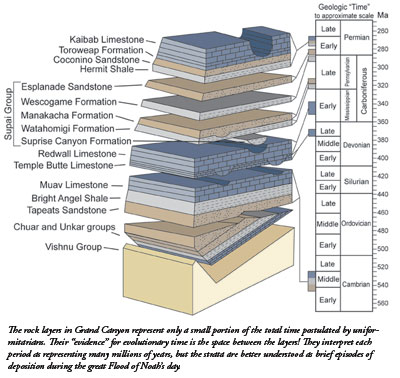 If the old earth view is correct, then the record is woefully incomplete. Grand Canyon strata are all “dated” in the supposedly 300 million-year-long Paleozoic Era, but of the seven periods within that era, only five are represented in Grand Canyon. More importantly, if the upper and lower surfaces of each stratum are dated by questionable uniformitarian means and plotted on a vertical line showing the entire Paleozoic Era, less than ten percent of the total time postulated by evolutionists is represented! It better represents brief episodes of deposition within the great Flood of Noah’s day.

The geologic column as normally presented should not be considered accurate history and should be recognized as a statement of evolutionary old-earth dogma. There is some truth contained in the geologic column, but not as it is normally taught. Its implications can never justify doubting God’s truth as recorded in Scripture.