Besides adding distinction to the human face, the nose is an amazingly complex instrument. The insides of our noses are not just straight hollow tubes, but are shaped specifically to regulate airflow. A smooth bony constriction in the front has a smaller diameter than a human finger. This both protects the soft inner tissue from errant fingers and may act as a de Laval nozzle,1 increasing airspeed inside the nasal chamber.

Three curved plates called conchae intrude into each nasal passageway, one stacked upon the other. Made of thin bones shaped like crashing waves, the lower and middle conchae are larger and longer than the upper concha and process most of the air passing through. The shapes of the air passages between these bones induce a laminar (orderly, streamlined) airflow pattern, thus reducing turbulence. The middle and lower passages are curved in three dimensions--vertically they curl in a semicircle, lengthwise they curve downward toward the trachea, and widthwise they are convex. 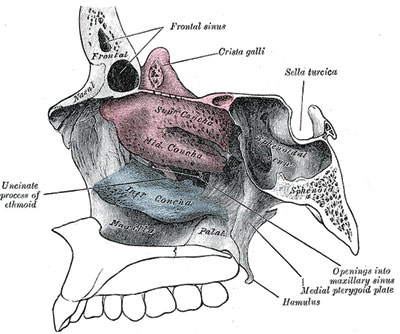 Attached to the conchae is expandable soft tissue that can congest the nasal passages or contract to open them. This is covered by a special skin designed to capture debris with small hairlike projections and a layer of mucus, thus protecting sensitive lung tissue. Our noses regulate airflow direction, humidification, heating, and immune functions by partnering with the lymphatic system.

In 2005, Dr. Denis Doorly of Imperial College, London, built and tested airflow through a see-through model of the nose. He concluded that "airflow in the nose is not simply laminar or turbulent."2 Is the fact that our noses produce some turbulent ("disordered") airflow an indication of poor design? Interestingly, the turbulence causes eddies to waft upward, allowing controlled puffs of air into the narrow space above the upper concha where the sensitive olfactory nerves are located. Much of our sense of smell depends on this unique airflow pattern. Most of the air is not wafted up, but jetted down. It is likely that this flow rate is increased by the downward curvature of the conchae, which may utilize the Coanda effect. This effect can be demonstrated by observing how fluid speeds up as it runs down the back of a vertically held spoon.

The same principles utilized by our noses are being considered by engineers in their quest to build more efficient machines. For example, the Boeing 787 Dreamliner is currently in production and promises to operate 20 percent more efficiently than the similarly-sized 767 (a 1982 product).3

As good as that sounds, an even more efficient airplane is being designed by scientists with the Silent Aircraft Initiative.4 The SAX40 will look like a giant manta ray, with wide wings attached to a wedge-shaped body. CNN reported that "the team found that the same technological changes that make craft quieter also make them more fuel-efficient."5 If human noses did not have conchae, turbulent air would rush right next to our ears, making life miserably noisy.

Increasingly, scientists are more closely examining nature to gain inspiration for new technologies. Evolutionary thinking would have us believe that nasal conchae developed over time through natural selection. However, there is no clear progression of fossilized transitional conchae to back up this claim; only fully-formed noses are in the rock record. There is not even a theoretically realistic mechanism that nature could implement--assuming a non-intelligent, non-volitional entity like the universe could implement anything at all--to generate such complex features. When we examine the nose, we can join Job in exclaiming, "Who knoweth not in all these that the hand of the Lord hath wrought this?"6