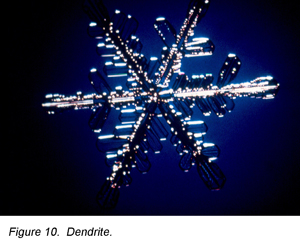 One of the most beautiful wonders of nature God has given us is the amazing variety of shapes of snow crystals that fall from the sky on a cold winter's night. Johann Kepler, the famous astronomer known for his laws of motion of the earth around the sun, conducted a study he titled A New Year's Gift, or On the Six-Cornered Snowflake when he was a young, aspiring scientist. Kepler was crossing the Karlsbrücke (Charles Bridge) in Prague, Czechoslovakia, on his way to a New Year's Eve party at the home of John Matthew Wacker when he noticed specks of down falling on his coat, all with six corners and feathered radii. He was embarrassed to appear before his patron without a New Year's gift and decided that a study of the pattern of a snowflake that "comes down from heaven and looks like a star"1 would make a perfect present.

Kepler's study was done entirely without a microscope or other equipment that could have allowed him to observe the microscopic structure of snow crystals and how they form. He was limited to optical observation, analogy, and logic in trying to explain why the snow crystals all had six corners. He considered the stacking of cannonballs, beehives, flowers, and other spacefilling geometries that later proved fundamental to the field of crystallography. He finally concluded after considerable exploration of many possible explanations that a "formative faculty" exists within the essence of ice that causes it to form in hexagonal patterns. Seldom has a mind of the first order so charmingly articulated an approach to solving a problem.

Hallet and Mason2 offered a modern explanation of why snow crystals exhibit hexagonal patterns. They found that water molecules are preferentially incorporated into the lattice structure of ice crystals as a

function of temperature. Molecules from the surrounding vapor that land on a growing crystal migrate over its surface and are fixed to either the axial or basal planes depending upon four temperature conditions. For example, snow crystals will grow lengthwise to form long, thin needles and columns like Figures 1 and 2 when the temperature is between about -3°C and -8°C. When the temperature is between about -8°C and -25°C, plate-like crystals will form as shown in Figures 3 through 10. Beautiful stellar and dendritic crystals form at about -15°C. In addition, the relative humidity of the air and the presence of supercooled liquid cloud droplets will cause secondary growth phenomena known as riming and dendritic growth. The small, dark spheres attached to the edges of the plate in Figure 5 are cloud droplets that were collected and attached to the snow crystal as rime as the crystal fell through these droplets on its way to the earth's surface. The dendritic and feathery edges of Figures 6 through 10 are produced by the rapid growth of snow crystals in a high-humidity environment.

A number of other scientists have also studied snow crystals in detail. Notable among these were Nakaya,3 and Magono and Lee4. In addition, many crystallographers have studied and written on the characteristics of crystal growth and why molecules and atoms form into a limited number of basic patterns. The modern explanation of the hexagonal symmetry of snow crystals is that a snow crystal is a macroscopic, outward manifestation of the internal arrangement of the molecules in ice. The molecules form an internal pattern of lowest free energy, one that possesses high structural symmetry. For the water molecule this is a type of symmetry called hexagonal close pack. Science is still searching for the genesis of this property that Kepler called the "formative faculty."

Evidence of the Creator

However, the most basic principle of why the initial molecules in an ice crystal assemble in a hexagonal pattern has still not been fully explained. In his essay on Kepler's snowflake study, Whyte concluded:

Yet a puzzle remains. For the fact which so impressed Kepler still constitutes a challenge: three-dimensional geometrical symmetry plays an important role in the visual world and yet it is not clear how it is generated in a universe supposedly dominated by random interactions and disturbances. We should not expect complete knowledge of highly complex systems, but it is reasonable to require of science a simple explanation of simple observations. If the hexagonal snowflake is highly complex, is there no short cut from the postulates of physics to our visual observations? What in the ultimate laws produces visually perfect patterns?5

Science always asks the questions of how and why. But in this case an even more basic question comes into play--how can order be explained in the context of a random, chaotic universe? In other words, if we don't believe in a Creator God, the universe should not be ordered. Where is this structure coming from?

The issue could be turned around. Because we observe order and design in the universe, as exemplified by the six-cornered snowflake, doesn't this demand a Creator who supplies this order and design? Kepler basically concluded this when he proposed his term "formative faculty." That is, a basic tendency was built into the very atoms and molecules of our world to produce this order. The characteristics of the oxygen and hydrogen atoms were designed by God to combine in ways that produce the hexagonal close pack pattern and form the six-cornered snowflake. Unlike linear molecules like carbon dioxide, the water molecule is asymmetric. It is that asymmetry that favors the hexagonal arrangement.

Ice crystals are composed of simple, repeated internal patterns that produce beautiful, external shapes. And built into the laws that govern ice crystal growth patterns are temperature dependencies that add filigrees to the basic hexagonal form. Columnar shapes, needle shapes, plate shapes, stellar shapes, and dendritic shapes are just some of the additional patterns in which snow crystals grow. In fact, because of the myriad of possible combinations of the millions of individual molecules that make up a single ice crystal, it can truly be said that no two snow crystals are exactly alike!

And if simple water molecules that form ice crystals exhibit the "formative faculty" of God's creative hand, consider how much more design is included in larger molecules such as the DNA molecule that determines life forms. The order and design we see in DNA and the laws of nature should forever put to rest the belief that God does not exist. The very molecules testify to God's existence and His love of order and beauty.

I corresponded with astronomer Carl Sagan for two years before his death and had conversations about such evidences for God's existence. In one of his letters he wrote, "The only 'Author' of Earth history that I see is the laws of Nature. Where they come from and why they are the way they are is another and of course very difficult issue." So, the evidence of order and design in our world is a very powerful witness, even to professed unbelievers.

A previous Acts & Facts article6 discussed the erroneous use of the growth of snow crystals as justification for the increase in order that would be necessary for spontaneous evolution. It was demonstrated that the total change of entropy in the universe during the growth of a snow crystal results in a net decrease in order, which agrees with the second law of thermodynamics. The presence and growth of order in snow crystals are evidences for the existence of God, His design in natural processes, and His love of order and beauty. How much more validation of Scripture does one need in order to believe the Lord when He says, "All things were made by him; and without him was not anything made that was made" (John 1:3)?

For readers who would like to study snow crystals in more detail, several books containing beautiful photomicrographs are available. A classic book containing over 2,000 snow crystal images taken in the late 1800s and early 1900s by a Vermont farmer known as "The Snowflake Man" is Snow Crystals by Bentley.7 A modern collection of award-winning snowflake photographs was recently published by Libbrecht.8 Some of his snow crystal pictures were recently used in a collection of stamps by the U.S. Postal Service. He also has a website at www.snowcrystals.com.

*Dr. Vardiman is Professor of Atmospheric Science, Chairman of the Astro/geophysics Department, and Director of Research.