"By the nearly imperceptible and inexorable work of glaciers, even the mighty mountains are worn down." Such dogma was routinely heard only a few decades ago in all of our university campuses. It is true that modern slow-moving glaciers are gradually eroding rock today and that glacial ice was responsible for some of earth's most breathtaking scenery. But have glaciers always moved at these slow rates? What does glacial surge tell us about the time it may have taken to create stunning landscapes like Yosemite Valley?

A curious thing happens from time to time in glacier-filled valleys around the world. A minority of glaciers that usually flow at rates measured in centimeters per day are sometimes known to surge, or "gallop," at rates of up to 112 meters per day. The significance to geology is that the erosion done in a single, day-long gallop may be far more extensive than what the normal rate of erosion can accomplish in a year.

Glacial misbehavior like this is sometimes hazardous to normal human activities. For example, when central Asia's largest valley glacier (the Fechenko Glacier) recently surged, the inhabitants of several villages watched helplessly as the ice mass plowed over their homes. And Pakistan's Kutiah Glacier advanced 12 kilometers over a period of 3 months in 1953. 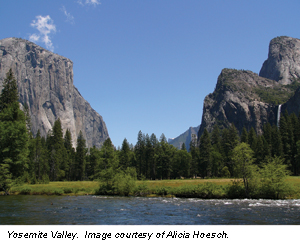 Eyewitness accounts of galloping glaciers seem to substantiate the claim that the surge begins high up on a glacier and then pushes down-valley in a wave. As the brittle upper surface of the glacier buckles violently, it apparently generates a deafening noise. Some people have described loud rumblings and snapping sounds; others have mistaken the sounds for earthquake tremors.

Positive evidence exists for ice surges on a far grander scale in the past. Deep sea cores from the North Atlantic reveal a highly irregular glacial record during the post-Flood Ice Age. Rather than regular and steady sediment accumulation, the core evidence points to large pulses of ice-rafted debris that accumulated suddenly. Marine sediments directly overlying these debris concentrations reveal a peculiar freshwater signature, leading to the interpretation that vast bodies of ice-melt suddenly freshened the oceans on the heels of major surges of continent-scale ice sheets.

Called Heinrich events (after marine geologist Hartmut Heinrich), these glacial phenomena have come under sharper focus as political fears concerning climate change have grown in recent years. What is most puzzling, however, is that the events appear to correspond with globally cold periods, not warm ones. In any event, it is increasingly evident that erosion during the Ice Age was not protracted over vast periods of time, but rather occurred primarily during very brief episodes. The need to invoke a long timescale in glacial geology does not seem to be based on the rock record.

Like all areas of earth history, it is becoming clear that the "rare event" in glacial geology may have provided more significant erosional force than that produced by routine and gradual processes. A biblical post-Flood Ice Age that lasted only a few thousand years makes good sense as an explanation for large-scale, glacially-eroded landscapes on earth.