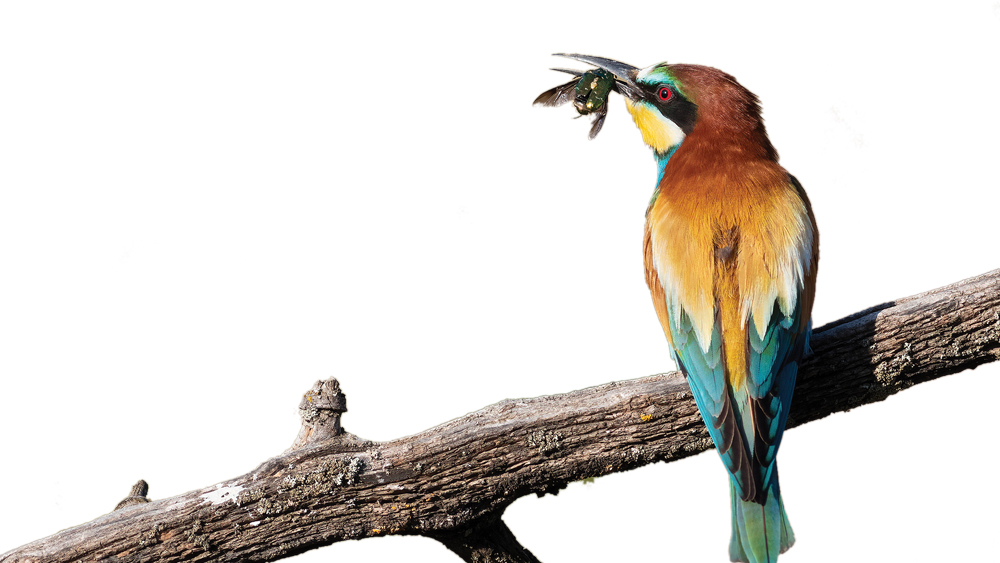 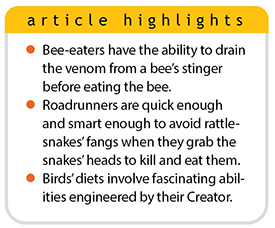 “Oh, she eats like a bird!” These words described the skimpy half-meal gulped down by a toddler just before she scampered off to play. The assumption behind those dismissive words implies that what birds eat is so simple and minimal that it’s hardly worth a few moments of consumption or thought.

But are the diets and dining of birds really so inconsequential and insignificant? As ICR’s Dr. Frank Sherwin has repeatedly documented—with huge frigatebirds and tiny hummingbirds—the diets and eating habits of birds can be fascinating.1 In short, our Lord Jesus Christ feeds His winged creatures in wondrous ways—“hidden in plain view”—that exhibit His clever and caring genius.2

Consider how bees and wasps can contain enough venom in their stingers to kill many of the birds that consume the insects.3,4 One bird family, Meropidae—aptly labeled “bee-eaters”—are famous for successfully neutralizing the venom of bees before eating them.3

Bee-eaters seize bees in flight, then position the hapless bee so its stinger is extended outside the bee-eater’s bill. Then the bird bashes the bee’s stinger against a hard object repeatedly, forcing the venom to spill out and drain from the stinger. After having drained out the otherwise-fatal venom, the bee-eater gulps down his or her prey, swallowing it with no harm to the bird’s insides.3

African bee-eaters are not the only birds that practice this venom-draining ability. Australian magpies display a similar habit.

The Australian magpie is not a picky eater. Its diet includes both plants and animals…dominated by a variety of larval and adult invertebrates, such as insects…and arachnids…as well as earthworms and millipedes.…It has been observed breaking off the stingers of bees and wasps before swallowing such dangerous bugs!4

Also consider how roadrunners successfully attack rattlesnakes, biting them precisely next to the snakes’ venom-loaded fangs. When a roadrunner’s bill clamps down on the top half of an open-mouthed rattler’s head, the rattler soon has his head fatally crushed—followed by the victorious roadrunner eating the snake.5

Does any of that sound so “simple” that a bird could accidently invent the specific traits and habits needed to eat like that?2 No, carefully snagging a bee or a wasp while avoiding its stinger and draining out its venom—before swallowing—is not a dining experience to be attempted by trial-and-error experiments. Likewise, randomly biting at the open mouth of a striking rattlesnake next to its venomous fangs is not a winning formula for any bird’s nutritional needs.3-5

So, if a toddler really eats like a bird, it’s not simple. The entire metabolic process is nothing short of a marvelous display of Christ’s caring bioengineering design (Job 9:10).