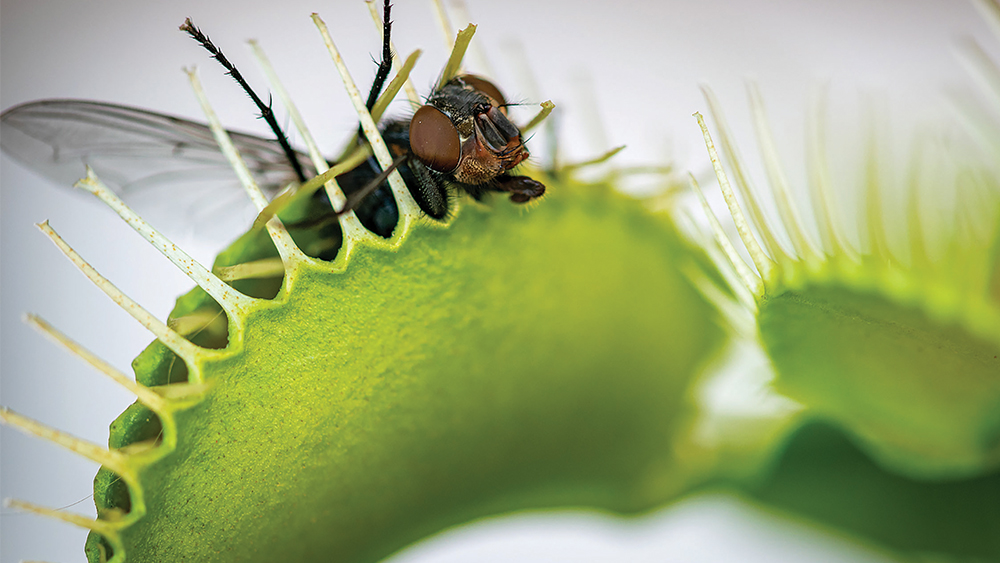 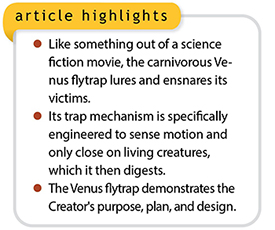 The Venus flytrap is one of the more unusual plants in God’s creation. It grows naturally only on the East Coast of the United States and has the fascinating ability to snap up unsuspecting insects with its uniquely designed leaves. Botanists have spent decades researching the micro-mechanics of its rapid leaf closure and enzymatic digestion of its hapless victims. As with all research, the more that’s discovered, the more the Creator’s hand is clearly seen.1

The two leaves (or halves) of this plant make up a trap. Each half has three sensory trigger hairs that perform as high-sensitivity levers. They’re designed to shut only when touched twice within approximately 20 seconds. In this way, raindrops don’t cause a false closure.

A 2020 article described how this fascinating plant senses its prey and rapidly responds.

The carnivorous Venus flytrap (Dionaea muscipula) has highly sensitive organs…sensory hairs that register even the weakest mechanical stimuli, amplify them and convert them into electrical signals that then spread quickly through the plant tissue.2

Furthermore, scientists discovered that “this mechanism would ensure that it is something living that is inside the leaves, rather than something like a little piece of stick or other things that [the plants] are not interested in investing in digesting.”3 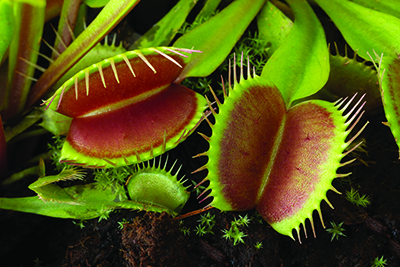 The Venus flytrap lures its victims with a scent that mimics food. It eats insects to add nutrients to its diet.

The key to such a mechanism is found in a biological process called an action potential (or the all-or-nothing law). It’s a localized, transitory difference in electrical potential occurring across, in this case, the membranes of sensory hair cells. With the right stimuli, “ion channels burst open due to a stretching of their envelope membrane and become electrically conductive.”2 Put another way, “Venus flytraps detect moving insects via highly sensitive, action potential (AP)-producing trigger hairs, which act as high-sensitivity levers, crucial for prey capture and digestion.”4

At the genetic level, biologists “found for the first time the genes [DNA] that presumably serve throughout the plant kingdom to convert local mechanical stimuli into systemic signals.”2 Mechano-sensors in these plants were also discovered. Scientists used tiny force meters and digital 3-D image correlation methods in their investigation. In other words, the application of the fields of mechanical engineering, electrophysics (i.e., mechano-electric stimulation), biochemistry (ion channels and various chemical factors), and botany were utilized to determine the finer points of the flytrap’s ability to snare and digest arthropods.

...only well-watered traps are able to snap shut quickly and correctly….Watering the plant changed the pressure in the cells and with it the behavior of the tissue. In order to close correctly, the traps also had to consist of three layers of tissue: an inner which constricts, an outer which expands, and a neutral middle layer.5

These same leaves secrete special enzymes to digest the prey. But the plant has to “know” whether the insect is large enough to begin the complex digestive process. How? Research continues on that.

It’s interesting to note that science articles generally fail to address, let alone explain, how this amazing plant evolved its deadly snap. There’s no fossil evidence of the multitude of steps linking Dionaea with another plant in a supposed evolutionary progression leading to the fully functional Venus flytrap. Instead, words and phrases such as “infer,” “must have,” “somehow differentiate,” and “evolutionary pressure” abound in the literature. It’s only stated that the flytrap snap supposedly evolved “48 million years” ago.6

Chance, time, and natural processes couldn’t have led to this strange plant predator. Instead, creationists marvel at the Venus flytrap’s resourceful purpose, plan, and design.