“For a great and effective door has opened to me, and there are many adversaries.” (1 Corinthians 16:9) 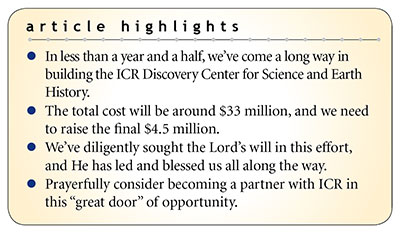 The ICR Discovery Center for Science and Earth History is taking shape! It was only in April 2017, just a little over 16 months ago, that we held a wonderful celebration acknowledging that the Lord had enabled us to break ground on a vision that had been in our hearts since early 2008. Many of you have been part of the support of this vision, both in prayer for its success and in your gifts to help us make it a reality. 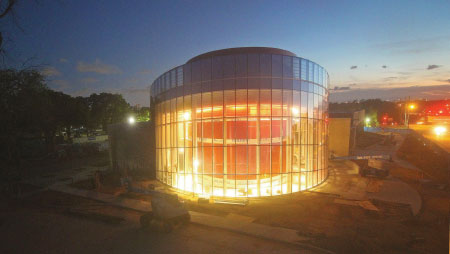 Although we will not formally open the ICR Discovery Center at that time, we’ll hold several informational and fundraising meetings during the fall and early winter months while we are working to complete the magnificent exhibit hall that will house the displays, animatronic animals, fantastic representations of life during the First World and after the Flood, and a virtually bottomless well of information that can be accessed via touchscreens throughout the exhibit areas.

As the Lord enables, we hope to open the ICR Discovery Center in April or May 2019. This “great door” has been funded by donations, large and small, from those who share our vision and want to further this exciting opportunity to reach generations not yet born with the liberating truth of God’s Word.

Over the 48 years of ICR’s ministry, the Lord Jesus has proven Himself faithful again and again.

As of June 2018, ICR has spent $20,368,225 on the property, architectural preparation, city and county permits, and construction for the ICR Discovery Center for Science and Earth History. All of this has been supplied by ICR donors! Not one dime has been borrowed, nor have ICR’s normal operations been curtailed. We have continued to pursue an aggressive seminar schedule, publish books, and generate professional DVDs, as well as our other ministry work. Please join in our thanksgiving to the Lord Jesus for His absolutely stunning provision.

By now, all of the needed vendors have been contracted to finish the remaining new construction and begin in earnest the completion of the displays, informational software and access points, music, visuals, murals, installation of the many dioramas and taxidermy animals—as well as the coordination of the animatronic dinosaurs, Ice Age mammals, and several of the interesting two-by-two processions into the Ark.

Here’s the macro picture of what remains to be done at the time of this writing.

Over the 48 years of ICR’s ministry, the Lord Jesus has proven Himself faithful again and again. We’ve tried to follow the basic biblical example of any Kingdom ministry:

There are many biblical examples, statements, and illustrations of how the Lord supplies for the Kingdom work of His people during their time on Earth. We are to tithe our “first fruits” to the “storehouse” (Malachi 3:10). My father, ICR founder Henry M. Morris, and I have always felt that in the New Testament Age 10% of a believer’s gross income belongs to the church of which he or she is a faithful member. All of his articles and mine that deal with that subject have insisted that ICR does not want a part of the Lord’s tithe.

The gifts that believers have the option and freedom to give should be bestowed as carefully as we know how to do. We should evaluate the many ministry opportunities that are seeking help and attempt to determine not only that their cause and focus are current and significant, but also that they operate according to biblical principles. Fortunately, there are accountability organizations to help those of us who want to give beyond our tithe. The ECFA group, Best in America, Charity Navigator, and even Amazon Smile are available to give potential donors a quick check on the efficiency, integrity, and administrative honesty of a given ministry. ICR is proud to have received the best rating available from all of these organizations.

Then we must consider the implications in the Bible of the motive for giving. The most demanding example, of course, is the precious widow who gave her “two mites” (all she had) for the work of God (Luke 21:2). Rarely could any of us meet that standard, but it is a goal to strive toward. Essentially, it specifies that we give without any desire “to be seen by men” (Matthew 23:5). That particular motivation in itself is often cited by the Lord Jesus. He castigated the Pharisees for their religious works that were intended to gain them public attention in one way or another—to be seen by men.

I can tell you with great joy that the overwhelming number of folks who have given to the ministry of ICR, and more recently to the ICR Discovery Center, have not even hinted at a plaque or sign or name to be placed in commemoration of their gift. As Jesus said, “Your Father who sees in secret will Himself reward you openly” (Matthew 6:4). In fact, the most generous giver who has helped bring this Discovery Center to fruition has specifically asked that we not reveal his name or give any public recognition for his generosity. He wants his gift to be “unto the Lord” for a work and ministry that the Lord has granted him the joy of participating in. Would that we all could be that sensitive to God’s leading.

As indicated earlier, the work on the lobby, planetarium, auditorium, and resource center is proceeding rapidly. The goal is to have that area ready for use by August 31, 2018.

All of the internal walls and most of the electrical and networking cabling have been finished in the exhibit hall. Much work has already been completed on the major displays (Grand Canyon, Mount St. Helens, Garden of Eden). Several of the large animatronic creatures have been installed (T. rex, wooly mammoth, Deinonychus, pterodactyl). Thirty-six of the larger taxidermy specimens have arrived and are in storage in our sales and distribution warehouse. The muralist has arrived and is hard at work painting the hundreds of feet of wall murals that will provide the backdrop and setting for the several galleries in the exhibit hall.

We are rapidly working on the storytelling side of the exhibits. Much of the difference between the ICR Discovery Center and a typical “walk and gawk” museum will be the depth and accessibility of the information made available throughout the center. Every exhibit will have touchscreens in place that will allow visitors to access various levels of information. The intent is that anyone, whether child, graduate student, or open skeptic, will have available at their fingertips all of the archives and research ICR has developed over the decades of our ministry.

As we install the hardscape and complete the various elements of the visual enhancements, we want to make sure that anyone visiting our Discovery Center can find the answers to their questions and that they’ll want to return again and again to the ever-changing and absolutely stunning displays of the evidences of the Lord’s creation, designed to build everyone up in “the faith which was once for all delivered to the saints” (Jude 1:3), to undergird the “substance of things hoped for, the evidence of things not seen” (Hebrews 11:1), and to proclaim those aspects of our Creator that are “clearly seen, being understood by the things that are made, even His eternal power and Godhead” (Romans1:20).

Become a partner with us in this “great door” of opportunity. There is much opposition, but “He who is in you is greater than he who is in the world” (1 John 4:4).