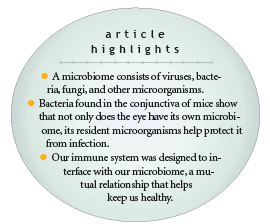 Researchers have discovered unique microbial communities on and in our skin, mouth, gut, and airways. This collection of viruses, bacteria, and fungi is called the microbiome. The human immune system’s amazing regulation of our microbiome demonstrates a high level of design in which the systems of two independent entities work together in a seamless operation. For example, not only do bacteria in the gut modify the human body’s immune response, but researchers found a gene that functions to maintain the balance of immunological elements regulating specific microbes.1 One may reasonably conclude that our bodies’ systems and their resident microorganisms were, and are, designed to work together.

One may reasonably conclude that our bodies’ systems and their resident microorganisms were, and are, designed to work together.

Microbiome researchers recently studied the conjunctiva of mice and made a discovery that astounded more than a few microbiologists. This mucus membrane covering the outside of the eyeball and lining the inside of the eyelids has long been thought to be sterile, but the scientists found it actually harbors bacteria. Why is this surprising? Because the tears that wash across the eyeball contain an enzyme called lysozyme, an antibacterial (or bacteriolytic) agent found in human and animal secretions. It’s designed to lethally split (hydrolyze) the glycosidic bond in the cell walls of bacteria as they float into our eye or are introduced by our fingers. Somehow, certain bacteria are not affected by lysozyme’s efficient bacteria-killing properties.

Beneficial microorganisms found in the gastrointestinal tract compete with disease-causing (pathogenic) microorganisms. In biology this is called the principle of competitive exclusion. Could something like this also be occurring on our eyes? A research study showed the bacteria living there affect the microbe interface system (immune system) to repel or discourage pathogens.2 As National Eye Institute (NEI) researcher Anthony St. Leger, the study’s lead author, notes, “It’s well known that there are good bacteria in the gut that modulate the immune response. Now we show that this relationship exists in the eye.”3

The NEI study found a species of bacteria called Corynebacterium mastitidis (C. mast) in the mice conjunctiva. Was this bacterium a resident or was it randomly introduced into the eye? Researchers didn’t know. They combined C. mast with the conjunctiva’s immune cells and remarkably found that a signaling protein (cytokine) called an interleukin was produced. This important substance is generated by white blood cells called lymphocytes and macrophages that stimulate the production and differentiation of other white cells. These cells then discharge antimicrobial proteins into the tears. Further observations “support the notion that C. mast is a resident commensal, not a bacterium that is continually re-introduced to the eye from the skin or the environment.”3 An NEI news release on the study stated, “The researchers are currently investigating the unique features that can make C. mast resistant to the immune response that it itself provokes and allow it to persist in the eye….[Scientists] still don’t know what enables C. mast to successfully establish itself in the eye, whereas other similar bacteria fail to colonize.”3

Creation scientists see this unique relationship as yet another example of designed interfacing.

To conclude, there is a resident microbiome in our eyes with bacteria such as C. mast that appear to stimulate a beneficial immune response. Creation scientists see this unique relationship as yet another example of designed interfacing, with our created immune system regulating the microbiome to the benefit of both.

* Mr. Sherwin is Research Associate, Senior Lecturer, and Science Writer at the Institute for Creation Research and earned his master’s in zoology from the University of Northern Colorado.