When we want to measure something in our everyday lives, we set a ruler against the object in question and read its dimensions from the markings. Things are not so simple when we attempt to measure objects as small as a proton or neutron (1 × 10-15 meters, or 1 fm). It’s particularly important to measure the radius of the proton since it is the only known stable baryon (particles made of three quarks) in nature.

Because protons and neutrons are so small, we cannot directly observe their interaction with any measuring device. We must observe the results of that interaction and infer their dimensions from those results. Indeed, at subatomic levels, the results of a measurement not only depend on how the measurement is done but on the energy at which it is made and the type of probe used to make the measurement. In an earlier Acts & Facts article, we saw explicitly how these things can affect a measurement of the proton’s radius.1 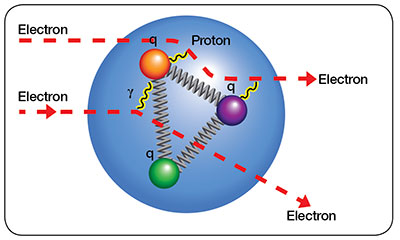 Figure 1. A schematic diagram of two possible events that could occur when an electron scatters off the quarks that make up a proton. The two different events illustrated will produce different results in a detector.

A recent article in Physics Today attempted to reconcile the differences between two earlier measurements of the proton’s radius.2 Several months later, a follow-up article in Science News indicated that the differences between the two measurements—i.e., direct electron scattering off the proton vs. measurement of the Lamb shift in muonic hydrogen—still remained after extensive efforts at reconciliation with theoretical models.3

So, why all the uncertainty about the dimensions of a proton’s radius? The proton is a composite particle made up of two up quarks and one down quark, with gluons continually exchanged between the quarks (see Figure 1). If we use a fermion particle, e.g., an electron or muon, to measure the radius of the proton, we will be effectively measuring the extent of the proton’s electromagnetic field and therefore its electronic radius (~ 0.9 fm) rather than its actual radius. On the other hand, if we use an electrically neutral hadron particle, e.g., a neutron or a neutral pi-meson, we are effectively measuring the extent of the proton’s strong field, or the range of the strong nuclear force (~ 1.4 fm), rather than the actual physical radius. 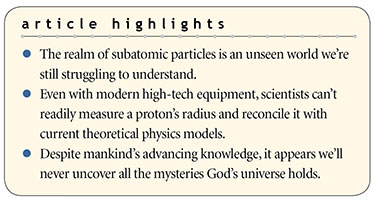 There are many ways an incident electron can interact with the target proton.4 It can hit a quark head-on and recoil backward. It can be diverted around an up quark (+ charge) or away from a down quark (- charge). Or it can interact with two or three of the constituent quarks before it exits the nucleus’ electromagnetic field. If the photon emitted by the electron in interacting with the quarks has sufficient energy, it can “pair produce” an electron and positron in the nucleus’ electromagnetic field. All these potential interactions are theoretically possible and thus must be accommodated by any model/hypothesis attempting to explain the observational results and extract the proton’s radius from the data. To date, no proposed model/hypothesis has been able to adequately account for the observed discrepancies between the two data sets. Clearly, the Standard Model of physics doesn’t yet explain everything.

Science is a wonderful tool for investigating the natural world we live in, but we should always remember that science is performed and interpreted by fallible human beings.

Science is a wonderful tool for investigating the natural world we live in, but we should always remember that science is performed and interpreted by fallible human beings. Thus, there is always a place for faith in the human soul. The ultimate question for every human is, in what are you going to put your faith—man or God?