A groundbreaking new technical paper1 shows that several creationist cosmologies can explain the "Pioneer anomaly," a decades-old mystery about distant spacecraft. Big Bang theorists cannot use this solution, yet they have found no alternative explanation they can agree upon. Thus the Pioneer data are evidence against the Big Bang and for a biblical, young universe.

In 1980, scientists at the Jet Propulsion Laboratory (JPL) in Pasadena, 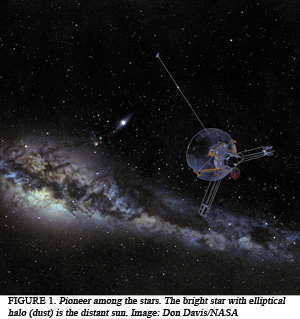 California, began to notice a peculiarity in the trajectories of their spacecraft Pioneer 10 and 11, which are now very distant, far beyond the orbit of Pluto (Figure 1). Later they noticed the same peculiarity in the trajectories of the Ulysses and Galileo spacecraft. Radar-like signals between earth and these spacecraft showed that the spacecraft were slowing down in their outward travels away from the sun more than computations of all the gravitational forces (mainly from the sun) could explain. They checked the calculations thoroughly, even using a different program on a different computer. Year by year, the anomaly (the difference between expected and observed speeds) continued to increase.

Finally, in 1998, they reported their observations in a major physics journal.2 All the spacecraft were losing speed more than expected by about 0.85 billionths of a meter/sec per second. Theorists were quick to notice that this number is very close to the Hubble constant (H) times the speed of light (c). The Hubble constant describes how redshifts in the light spectra of galaxies increase in proportion to their distance. This apparent connection to cosmology stimulated a flood of theoretical papers trying to explain the anomaly.

Some theorists suggested the number was only a coincidence, and that the cause of the deceleration was something simple, such as gas leaks at the right rate in the right direction on all four spacecraft. The JPL team quickly answered such remarks, and then in 2002 completely refuted them in a detailed fifty-page review3 of the data from Pioneer 10 and 11, the two spacecraft showing the effect most clearly. Other theorists invented new laws of physics, invoking such exotica as "braneworlds" or "mirrorworlds." A few theorists tried to apply conventional physics in new ways, such as appealing to larger-than-expected gravitational forces from the as-yet-unobserved Oort comet cloud. The JPL team surveyed all the theoretical offerings, and as of late 2005 found them all unsatisfactory. Below I outline how the essential features of several creationist cosmologies offer a coherent solution to the mystery.

The cosmos has a center and has expanded

My 1994 book Starlight and Time4 pointed out a "trade secret" of Big Bang cosmologists: they assume that at all times, all the space that exists is completely filled (roughly uniformly) with matter and energy. That means the Big Bang has no "farthest galaxies" beyond which there is a lot of empty space. It has no "edge of space," either. Some versions of the Big Bang have infinite space (and matter), while other versions have the fabric of space curved back upon itself. (If you don't understand the latter, buttonhole your nearest available Big Bang theorist and make him explain it to you!) The Big Bang theories do not have a large empty space surrounding all the galaxies. That means the Big Bang theories cannot have all the stars falling toward, or orbiting around, a common center of mass. The Big Bang is centerless.

But the Bible implies that the real universe indeed has a center! Appendix B of Starlight and Time details much of what follows. After creating a light-years-size ball of water (Genesis 1:2, "the deep ... the waters"), God said, "Let there be an expanse |or "firmament"| in the midst of the waters" (Genesis 1:6, italics mine). So the expanse started near the center of the large ball of water as a thin spherical layer separating a planet-size ball of water inside it from the much larger amount of water outside it (Genesis 1:7).

Then Genesis 1:8 adds, "God called the expanse heavens." Moses' first readers, the Israelites in Sinai, would have understood the heavens as being the space that, after the fifth day, would contain not only clouds and birds, but also the sun, moon, and stars (e.g., Deuteronomy 4:19). The distinction between "atmosphere" and "outer space" is a modern idea that is foreign to the original meaning of the word.

Next God stretched out the expanse. Not only is the idea of "spreading out" implicit in the Hebrew word for expanse, but seventeen verses in the Old Testament affirm it, such as Isaiah 40:22, which declares that God "... stretches out the heavens like a curtain and spreads them out like a tent to dwell in."

God wanted the expanse to be big enough to contain all the stars He created (Isaiah40:26) on the fourth day (an ordinary-length day by earth's clocks): "And God made the two great lights ... and the stars ... and placed them in |not 'above'| the expanse of the heavens" (Genesis 1:16-17, my translation and italics). So the heavens include everything from the earth's surface out to "the waters above" the expanse. Psalm 148:3-4 implies that "the waters above the heavens" still exist and are above the stars and "highest heavens." (They are not the "windows of the heavens," one of the sources of water for the Genesis flood.) 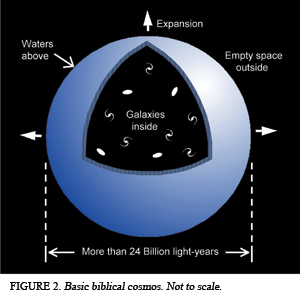 Figure 2 illustrates this basic biblical cosmos. The "waters above" are beyond the most distant galaxy our telescopes have detected, at least 12 billion light years away (1 light year = 6 trillion miles). If the waters were only a little further away, 13.8 billion light years, they would be beyond current estimates of the "redshift horizon," which is the distance limit of what we can observe.

From my interpretation of the Pioneer data, at that distance the waters would have a total mass of about twenty times the mass of all the stars. This shell of water would now be so thin that it would probably have frozen and broken up into a tenuous veil of ice particles. If its composition is similar to the ice particles in Saturn's rings, it would be about 40 meters thick. Though the "waters above" are as insubstantial as a cloud, they cover such a large area that they have an enormous total mass, which affects the physics in the neighborhood of our solar system.

Lest we forget where the earth is in all this, Genesis 1:9 tells us that the "waters below the heavens" became the seas and solid earth on the third day of creation. Because the initial spherical expanse contained those waters and was "in the midst" of all the waters, it appears that the earth is approximately (on a cosmological scale of distances) at the center of the cosmos. (In contrast to geocentrism, I am not claiming the earth is at the exact center or is motionless with respect to it.)

A backyard trampoline helps to illustrate how the expansion of a cosmos with a center explains the mystery of the apparent slowdown of the Pioneer spacecraft. This trampoline has thumbscrews around the rim that can tighten and stretch out the elastic fabric considerably. Now make a two-foot diameter ring of heavy wet sand on the trampoline. The weight of the sand makes a dent in the elastic fabric, as Figure 3 shows. Inside the ring of sand, the fabric is flat. The depth of the dent is, say, four inches below the rim of the trampoline. 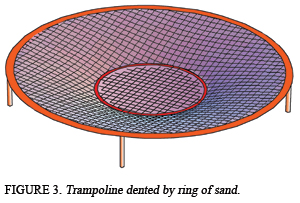 Now turn the tightening screws and stretch out the fabric until the ring of sand is larger, three feet in diameter. The tension in the fabric (force tending to pull it apart) has become greater, and the dent is shallower, say only three inches deep. Stretching out the fabric has raised the sand ring and the dent by one inch. That has increased their gravitational energy, the energy it takes to lift an object.

Now imagine waves traveling in the trampoline. If you karate-chop one side of the trampoline fabric, a wave travels out from the point of impact. The higher the tension in the fabric, the faster the wave travels. You can see the same effect more easily with a heavy cable attached to a tree. Stand a few dozen feet away from the tree with the loose end held near your eye. Pull steadily on the cable to apply some tension to it. Move the cable sharply up and down, just once, and you will see a pulse move down toward the tree and bounce back to you. The harder you pull on the cable, the higher the tension, and the faster the pulse will move.

The upshot is that God's stretching of the fabric of space increases the speed of radio waves, the basis of radar measurements. Recall that in the first paragraph of this article, I said that it was "radar-like signals between earth and these spacecraft" that showed the changes in the spacecraft speeds. In the technical paper I show that the speeding up of the radio waves reduces the "radar" distance of the spacecraft below what is expected in precisely the right way as to explain the apparent deceleration. The Pioneer anomaly is the first evidence we have that the expansion of space is occurring today and locally, not just in the past and far away.

Another important result is that to fit the Pioneer data, the "dent" in the fabric of space has to be very deep, so deep that only thousands of years ago there would have been strong time dilation (changes in the rates of physical processes). That can explain how light from distant galaxies got to the earth quickly, by the end of the fourth day of creation. Several creation cosmologies (not all developed by me) feature recent time dilation, a center of mass, and expansion of space. These essential features explain the Pioneer anomaly. In contrast, Big Bang theories cannot invoke this explanation. So the Pioneer data represent striking support for a straightforward biblical view of a young universe, while presenting yet another serious problem for Big Bang cosmologies.

For more references, please see the end notes of the technical paper cited in the first footnote listed below.