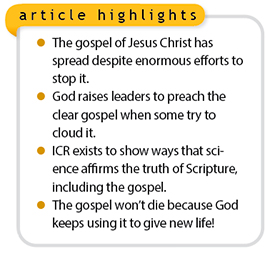 Soon after the gospel first emerged, ancient Rome tried to exterminate whoever believed it. They tortured and murdered early Christians, but that didn’t stop its progress. Thousands of years later, 20th-century communism sought to eradicate Christians, yet Soviet and Chinese martyrs refused to abandon the Lord Jesus. Their faithfulness again showed that governments remain powerless to erase the gospel. What gives the gospel such staying power?

The word gospel means “good news.” It’s a message anyone can understand and respond to. The gospel says that we sin against a holy God and our sins earn just punishment. And yet in our mortal lives, God holds back His wrath and offers us mercy. The good news for us sinners is that God’s own Son, “Christ crucified” (1 Corinthians 1:23), suffered the punishment we were due. This substitution means that God will commute the death sentence for “whoever desires” (Revelation 22:17) to repent of sin and trust Christ, who “has loved us and given Himself for us” (Ephesians 5:2).

This message just keeps exerting the “power of God to salvation for everyone who believes” (Romans 1:16), even when the devil switches from trying to destroy the Church from outside to trying to destroy it from within (1 Peter 2:1). At points in history, churchgoers began to ignore God’s grace revealed in the gospel and turned Christianity into a list of do’s and don’ts. But just when it seemed the gospel would get diluted into nonexistence, the Reformers understood and believed the gospel, trusting in the Lord Jesus to save them from the high cost of their own sins. The good news was just as good as ever, spreading across the world as godly martyrs placed Bibles into the hands of the people in their own languages.

Each generation threatens the gospel anew. More recent attacks on the gospel come from scholars who study the original texts from which we derive our Bible translations. They too often assume long ages of human development. This nonbiblical view of history leads them to teach that although Scripture may contain truth, the Bible is not wholly true. What better way to destroy confidence in the gospel than to train pastors to believe there are mistakes in the very Scriptures that teach this gospel message?

In every era and nation, whether attacked from without or within, some hear and reject the gospel while others hear and believe. It seems that in any time or place “the message of the cross is foolishness to those who are perishing, but to us who are being saved it is the power of God” (1 Corinthians 1:18).

The heart of the ministry of the Institute for Creation Research lies in showing new ways that science supports Scripture. Science confirms that we can trust all of God’s Word—the parts that speak of the origin of life, seriousness of sin, and coming judgment, as well as the testimony that the Lord Jesus is “not willing that any should perish but that all should come to repentance” (2 Peter 3:9). Why does the gospel persist? God has not yet finished using it to grant sinners everlasting life!