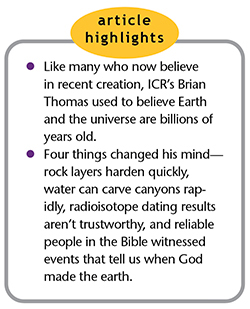 A student recently asked what I believe about the age of the earth. I replied that at one time I felt absolutely certain that the world was billions of years old. I even wrote a song that mentioned “the age of dinosaurs.” Now, however, I believe the dinosaurs that got fossilized lived when (but not where) Noah lived. They got locked in rocks through Noah’s Flood only 4,500 or so years ago. Four specific facts helped change my mind.

The change began when a Christian friend challenged me to debunk creation-believing scientists. The information he gave me revealed key facts my college professors and textbooks never noted.

For example, I had never heard that the 1980 eruption of Mount St. Helens deposited debris partly in layers. Or that in two short years those layers hardened enough to form steep-sided canyon walls. I’d always taken for granted what my teachers told me—forming rock layers needs lots of time. When I learned that instead sedimentary rocks form from lots of water, I started to doubt deep time.

Another fact that raised my eyebrows was the small 1982 eruption that carved a huge gorge through those fresh Mount St. Helens layers and through some lava rock beneath them. I always thought it took millions of years of gradual erosion to excavate canyons one grain at a time. But, just like the new rock layers, this canyon formed in one catastrophic day.

The third fact that shook my faith in Earth’s supposedly great age involved radioisotopes. After Mount St. Helens’ 1980 eruption, smaller lava burps built a dome of rock in the new crater atop the mountain. According to standard thinking, radioisotope “clocks” can reveal the exact time lava hardened. This fresh rock offered a chance to test a common radioisotope dating method.

Scientists who believed in biblical creation—which holds that Earth is only thousands of years old—got permission to collect the lava rocks for testing. They already doubted the millions of years so often pinned to radioisotope counts, but the lab technicians they sent their rock samples to had no such disbelief. The technicians’ radioisotope-based “age” for the one-decade-old rock was half a million years!1 Other tests of historical lava flows with known ages haven’t shown accurate ages either.2

Probably the rock’s molten state never wound the isotopic clocks back to zero like the theory suggests. For the first time I began to ask how anybody can know the true isotope ratios of these rocks. And which other published results could be completely wrong like these?

I realized I needed to find a more reliable source of Earth history. That’s where the fourth fact led me. I found in the pages of the Bible a collection of reliable eyewitness accounts that list the number of years since the beginning of the world—about 6,000. In a law court, reliable eyewitness testimony would trump circumstantial evidence such as isotope ratios. The prophets who wrote Scripture lived through the events they described. Secular scientists who taught me about billions of years never saw those supposed years. Science can’t even measure them.

Why do I believe in biblical creation? Layers form fast, canyons form fast, radioisotope results aren’t trustworthy, and the testimony of reliable prophets who lived in Bible days tells us how and when God made the world—by His power only thousands of years ago.