A sketch showing the supposed evolution of the horse has appeared in nearly every textbook dealing with evolution. Typically, it illustrates a transition from Eohippus (size of a small dog, four toes on the front foot and three on the rear, possessing browsing teeth and found in Eocene strata) to Mesohippus (a slightly larger browser, three toes on the front, found primarily in Oligocene strata) to Merychippus (larger still, three toed but with grazing teeth, found in Miocene strata) to Pliohippus (pony sized, still with three toes and grazing teeth, found throughout the Pliocene) to modern Equus, or horse (with one toe, front and back, and with grazing teeth). Unfortunately, this presentation does not contain the whole truth.

In modem decades, the tree of horse evolution has been refuted and abandoned, in professional circles at least. Consider this admission by Steven Stanley: "The horse ... the classic story of one genus fuming into another, … Now it's becoming apparent that there's an overlap of these genera, and that there were many species belonging to each one" (Bioscience, Dec. 1986). Mr. Walt Barnhart, in his master's thesis (1987) at ICR, catalogued this overlap in 21 different genera with data from the evolutionary literature. Dotted lines represent uncertainties in dating. Most individual categories are known only from their teeth. It is hard to see any evolutionary sequence here.

A significant problem surfaced when Lou Sunderland observed (in Darwin's Enigma) that mounted specimens in the American Museum of Natural History showed an irregularity of rib pairs. Eohippus had 18 pairs, Orohippus had 15 pairs, Pliohippus jumped to 19 pairs, and the modern horse had 18. Some series!

Furthermore, the Eohippus, more properly named Hyracotherium, is remarkably similar to the modern hyrax, a rock badger. The San Diego Zoo keeps a colony, where a sign identifies them as similar to the animal, which evolved into the horse and elephant. Others propose a hyrax-like ancestor for the sea cow also. Quite a family tree.

Dr. Duane Gish has observed (Evolution: The Challenge of the Fossil Record) that during the time when four toes were supposedly evolving into one in North America, in South America a one-toed ungulate (a horse-like browser) was evolving into a three-toed descendant. Evolution theory, being as plastic as it is, can accommodate almost any series of fossils, and tell a good evolutionary "just so" story about how it all happened.

A better understanding of the fossil data would be to consider the 21 genera in Barnhart's chart as belonging to three created kinds. Each category is quite different, and there are no transitional forms between them. The evidence is quite compatible with the true history we read in Genesis. 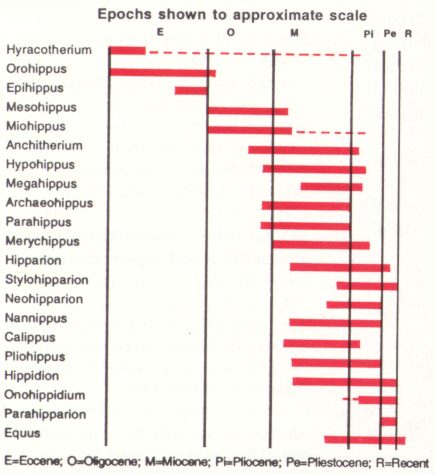 * Dr. John Morris is the President of the Institute for Creation Research.

Creation Geology [Podcast]
Can we believe both the Bible and geology? ICR geologist and Research Associate Dr. Tim Clarey uncovers how both fit together in this 5-part podcast...
BY: TIM CLAREY, PH.D.

Oil as a “Soft Tissue”
Oil is in the news almost every day due to fluctuating prices and controversial fracking. How does oil fit into the Bible? Was oil made in the...
BY: TIM CLAREY, PH.D.

Antarctica Rising: Uplift Rate Suppresses Conventional .,.
Land is not supposed to rise this fast. Generations of geologists have been trained to think in terms of slow and steady processes to explain Earth...
BY: BRIAN THOMAS, PH.D.
More Earth Sciences Resources

Earthquakes Still Active in Utah
On March 18, 2020, a 5.7 magnitude earthquake shook the Salt Lake City area. Specifically, it hit underneath the town of Magna, Utah. Since that time,...
BY: TIM CLAREY, PH.D.
More Human Stewardship

Leading Through Sacrifice
The term “sacrifice” is often tossed around without giving genuine thought to what it really means. Is it really a sacrifice to give up...
BY: CHRIS KINMAN

Coronavirus Causes "Waffle House Index" Red N.,.
Giant yellow squares housing black letters signal to breakfast lovers across the United States that they have found a safe haven where they can enjoy waffles,...
BY: TREY BOWLING

Claims of 'Freshwater' Plesiosaurs Drowned by the Flood
A new discovery in Morocco’s Saharan Desert has evolutionary scientists making claims that plesiosaurs lived in freshwater too.1 Usually...
BY: TIM CLAREY, PH.D.