Is there water in moon rocks? There shouldn't be, according to secular accounts of the moon's origins. But now, decades after Apollo missions returned to Earth with moon rocks, scientists at The Open University in the UK have reported that minerals in these rocks hold water remnants.1 Could this lunar water support the biblical account of moon origins?

Space.com reported, "Until recently, scientists thought the interior of the moon was bone-dry, originating as the moon did from the molten debris of a giant impact of a Mars-size protoplanet against Earth about 4.5 billion years ago."2 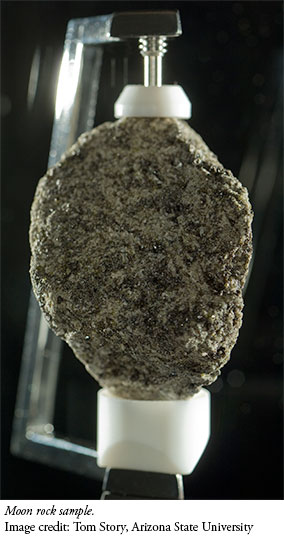 The moon's supposedly hot beginning would have quickly boiled off any water it contained. This is why "it remains a mystery exactly how water found within the moon survived."2

Researchers presented their water-content analyses of two lunar rocks, both of which were taken from areas on the moon that seem to not have changed much since the moon formed. Despite this, one of the rocks showed internal evidence of change from when hot fluids apparently altered the original rock chemistry.

The researchers said the second rock "does not show any signs of alteration and despite being heavily shocked seems to retain its primitive OH-D/H [OH came from water; D/H is the deuterium-to-hydrogen ratio.] systematics."3 Assuming that what "seems to retain its primitive" water actually does have water, the water must have at one time bathed the minerals that formed this moon rock.

The study authors offered no reason why molten magma would not have rapidly steamed off any water in the moon.

Based on the title of their presentation to the European Planetary Science Congress on September 9, 2013, "Investigating the H2O content and H isotopic composition of the primitive lunar magma ocean (LMO) cumulates," these researchers seem to presume primitive lunar magma actually existed. And instead of evaluating the story in light of the evidence, they seem to have assumed the hot origins story despite evidence to the contrary.

The sophisticated structure and function of the moon leave no doubt as to its origin by special creation. It is beyond the ability of random, natural forces to have positioned the moon at just the right distance from Earth to, for example, generate tides tall enough to cycle vital nutrients to oxygen-providing microbes but not so tall that they destroy the coasts. Similarly, the moon's circular orbit steadies the tides.

And now, finding that water was present during the moon's formation not only weakens secular theories of a molten moon, but also confirms the Bible's suggestion of a cold and wet lunar origin.

According to Genesis, God spoke the moon into existence on Day Four of creation, calling it the "lesser light."4,5 Making the moon did not require magma. Also according to Genesis, the first substance that God created even before making the luminaries was water itself. Genesis states, "The earth was without form, and void; and darkness was on the face of the deep. And the Spirit of God was hovering over the face of the waters."6

In the New Testament, Peter predicted the presentation of these finds when he wrote of scoffers' treatment of biblical origins: "For this they willfully forget: that by the word of God the heavens were of old, and the earth standing out of water and in the water."7

Taken together, these passages suggest that the Earth, at least, began with a watery origin. And it is possible that Peter's watery origins reference also applies to other heavenly bodies, including solar planets and moons.8