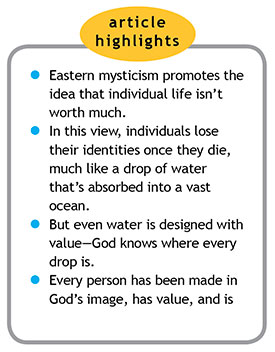 When skeptics criticize biblical teachings, they often attack God’s character.1 One tactic is to malign the Creator by devaluing the people He created. When someone denies the precious worth of human life, that denial clashes with the Bible’s teachings about how God made and cares for humans.2

For example, an astrophysics professor who advocates New Age mysticism once used Hinduism’s drop-of-water analogy to imply that an individual’s unique value is an illusion, or ephemeral at best. This portrays our earthly journeys as emptying into a common “one size fits all” dead-end. What weird and pessimistic theory was he promoting?

According to [Hinduism’s] Upanishadic view, what happens…is that the individual Atman [personal identity] merges into the cosmic Brahman [oneness], much like a drop of water which, when dropped into the ocean, loses its individuality and becomes one with the ocean.3

The analogy suggests that individual drops of water are nothing permanent and thus nothing special because they quickly lose their individual identities when they enter oceans, lakes, or other bodies of water. This confuses inconspicuousness with becoming nothing—which doesn’t happen here because water molecules continue to exist.4

Notice also that anti-personhood notions clash with the Bible’s teaching that God created humans in His own image (Genesis 1:26-27). The Hindu mythological concept that individual personhood is swallowed up into the impersonal cosmic “one” assumes that our human lives have no permanent uniqueness. However, that fanciful fiction rejects the Creator God’s very personal choices to create each one of us, permanently, as exactly the individual humans we are and continue to be.2

Furthermore, the drop-of-water analogy is false even at the chemistry level. Each human has unique genetic and epigenetic identity, whereas all drops of pure water are composed only of H2O.5

Unsurprisingly, as with many other errors, this thinking is traceable to both ignoring Scripture and inadequately appreciating God’s providential power (Matthew 22:29; Mark 12:24). In fact, God knows about, sees, and interacts with all raindrops, snowflakes, and other tiny bits of water. Earth’s entire water cycle is just one of its interactive systems that God carefully made, owns, and operates.2,5,6

“The rain comes down, and the snow from heaven, and do not return there, but water the earth, and make it bring forth and bud, that it may give seed to the sower and bread to the eater.” (Isaiah 55:10)

Imagine filming or writing a documentary of the ongoing adventures of a single drop of water as it moves through its individual journey in Earth’s water cycle, day after day, for weeks, then months, years, centuries, and beyond.

That’s hard to imagine! Yet, God doesn’t just imagine the exact location of each water droplet. He actually keeps track of them all—within oceans, evaporated into clouds, raining down as raindrops, free-falling as snowflakes, and trickling in streams. Humans can’t keep track of all those water drops, but God can and does. Billions of people don’t know you or how unique you are or see where your life is going—or where it came from. But God sees it all, and He cares! You are much more valuable than a drop of water in a cosmic ocean.

The mystical astrophysicist was wrong. God cares personally about us as His human creatures, and that is permanently true.