Bible critics have long claimed the God of the Old Testament was unjust and mean. Some cite Noah’s Flood as an example: If God is really good, then why would He drown all those humans? The best answer to give depends on the attitude of the questioner.

Most who say God is unjust probably have little interest in the truth.1 Those with bad attitudes don’t listen well, and Christians shouldn’t waste time trying to defend our good God to people with closed hearts. But how can we be sure of another person’s attitude?

One way is to ask questions that test their intention. For example, if they express a problem with the way they think God handled something, then ask which book, chapter, and verse from the Bible they object to. Often this is all it takes. A scoffer may just walk away. They may even offer unkind words as a parting shot. If that happens, your kindness will speak more than words. 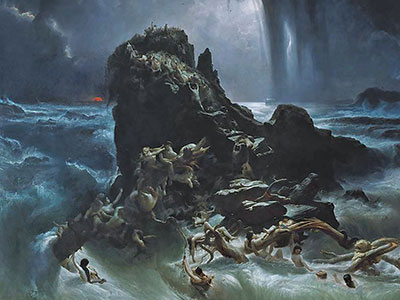 But someone may actually take you up on the offer to discuss Bible verses. That rare person may want a real answer to why a good God would flood the whole world. What would you say?

You could ask how they know that the pre-Flood people’s punishment was more than their crimes deserved. Does your friend have some special insight into the good behavior of those ancients that suggests they didn’t actually deserve the divine death penalty? Of course, such insight is impossible without a time machine to reveal how the ancients behaved. Without that machine, we access the past through reliable eyewitness accounts. The Genesis text the skeptics want to dismiss has just that. It says about pre-Flood man: “Every intent of the thoughts of his heart was only evil continually.”2

The pre-Flood people must have committed similar crimes to those of later nations that brought down judgment. Survey the Bible to learn what happened when God had enough of their murdering, lying, bribery, violating the weak, and burning their babies on pagan altars.3 And we’re not talking about one nation before the Flood—the whole world sold out to total violence.4

What would have resulted had God allowed that evil to persist? Would those who say that God should not have flooded that world also invite jailers to release all the imprisoned murderers into their own neighborhoods? God really did the right thing.

When He flooded the world, He was even thinking of the very person who now tries to pin injustice on Him. If the Lord had not sent a flood, then humans would have snuffed themselves out. We would never have been born. God wanted us alive!5 He wanted to give us a chance to honor and enjoy Him forever.6 He gave the pre-Flood people plenty of chances, but they ignored Noah’s message to repent.7 God loves us enough to have judged them. We now have a chance to repent of our sins and trust in the Lord Jesus Christ, who absorbed our punishment in Himself before He defeated death.8

Was a worldwide flood judgment too extreme? Only to those who don’t want to acknowledge the just penalty for their own sins by pretending that God lacks love.