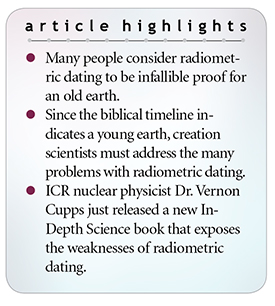 Prove it. That’s the challenge biblical creationists often face when discussing the scientific validity of the Genesis creation account with skeptics. Many people leave the church, especially young adults, when they think that the Bible and science can’t be harmonized. But what if incredible harmony actually exists?

Those who believe in millions and billions of years often point to radiometric dating as indisputable scientific proof that Earth is old. Since the biblical timeline indicates a young earth that’s only about 6,000 years old, creation scientists must address the radiometric dating issue. We need someone with great expertise to take a critical look at these methods and pull all the findings together.

ICR Research Associate Dr. Vernon Cupps’ new book Rethinking Radiometric Dating: Evidence for a Young Earth from a Nuclear Physicist fulfills this need. It kicks off ICR’s new In-Depth Science book series by demonstrating that radiometric dating is not based on the scientific method but rather on assumptions that cannot be observationally verified.

The chapters in his book cover the following topics, among others:

ICR scientists conduct scientific research to show the abundance of evidence that confirms the accuracy and authority of the Bible.

ICR scientists like Dr. Cupps conduct scientific research to show the abundance of evidence that confirms the accuracy and authority of the Bible. Our ministry has published numerous resources that explain why evolution is scientifically untenable, how most of Earth’s rock layers formed during the Genesis Flood, and why soft tissue in dinosaur fossils couldn’t possibly be millions of years old. Now we offer Rethinking Radiometric Dating to challenge the dating methods undergirding secular science’s deep-time ages, to help Christian believers confidently defend their faith, and to invite skeptics to reevaluate their deep-time beliefs.