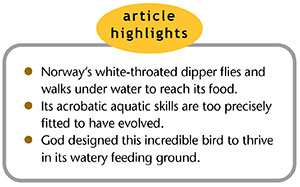 The official bird of Norway is Cinclus cinclus, the white-throated dipper, an ordinary-looking bird that behaves in very extraordinary ways.1 It’s designed to forage under water, but not like a dabbling duck. Rather, this bird dips, flies, rows, and even walks under water to catch its food. Unsurprisingly, evolutionists have no plausible explanation for how this behavior originated, much less why this small bird is so skilled in these strategic submarine stunts.2

The dipper is known to range all of Norway as a year-round resident.3 This bird needs running fresh water because that’s where its primary food source resides. And Norway offers lots of fast-running fresh water as mountain snow melts and flows in crevices, waterfalls, streams, and other drainage pathways to the sea. This passerine (perching songbird) is thus deemed an “aquatic” bird due to its familiar habit of dipping into fresh water and “walking” across streambeds as it fishes for underwater insect larvae and other edible morsels.

The dipper has two behavioral movements that fit its name. As it perches near quick-flowing streams, it often suddenly bobs with its tail propped up (somewhat like a wren) close to the water. And sometimes after wading into the water’s edge, it dives into the flowing water and then submerges by quickly plunging with a small splash. As it maneuvers under water, its wings appear to “fly” like a penguin’s does when it swims. When the current is stronger, at times the bird vigorously “rows” its sturdy wings like oars to resist the current in order to steady its position.

Amazing! How does the dipper know to perform these underwater behaviors? An unprogrammed or otherwise undirected “trial and error” process isn’t an adequate explanation because failures equal drownings. A drowned dipper wouldn’t get a second chance to evolve such underwater survival skills. Dippers, like other birds, need providential programming in place to fill their special niches.4

The dipper also uses its strong prehensile toes to grab on to projecting substrates on the bottom of a stream, while straining its muscles and keeping its head under water to prevent it from rising to the surface—thus giving the appearance of walking on the bottom of the stream! The food the dipper collects is often epibenthic (located atop the stream-bottom sediments) such as caddisfly and other insect larvae, as well as small freshwater mollusks, fish, amphibians, and the thin amphipod shrimp.

What a strange bird! It uses specially designed anatomy and strength to get its food, even appearing to defy gravity while it does. God equipped this bird with the remarkable skills it needs to reap the riches of freshwater streams to supply its daily needs.5