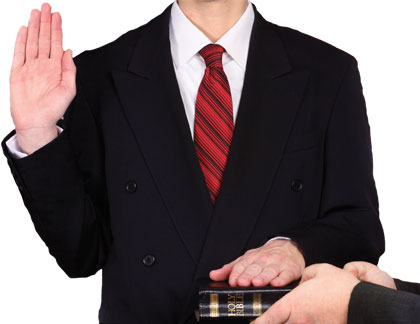 "What is truth?" asked Pontius Pilate as Truth incarnate stood before him.1 Whether the Roman governor was interested in the answer is doubtful, but we must ask ourselves who was really put "on trial" that day. Jesus? Yes, of course. But so was Pilate.

In fact, each of us is put "on trial" every day, able to present our own answer to that same question: "What is truth?" Yet before we give a final account to the Judge of all judges, we will undoubtedly testify with our words and our works to those we encounter each day.

Think of life as a courtroom. Is our testimony true or false, clear or unclear, consistent or inconsistent, reliable or unreliable? Are we true witnesses or false witnesses?

To Tell the Truth

In every forensic context, whether a civil lawsuit or a criminal prosecution, truth-telling is a serious matter.2 Forensic consequences rely on trial testimony, so testimony needs to be clear, reliable, and truthful. Judges recognize that conflicts in trial testimony cannot always be explained away as mistaken perceptions, faulty memories, or other inadvertent errors. Sometimes witnesses who know the truth testify otherwise because their personal agendas are not morally anchored in truth-telling.3 It has been that way since Adam.

The ninth of the Ten Commandments says, "Thou shalt not bear false witness against thy neighbour" (Exodus 20:16). What was the penalty for breaking this commandment? Death, in some circumstances.

If a false witness rise up against any man to testify against him that which is wrong; then both the men [literally, "mortal men"], between whom the controversy is, shall stand before the LORD, before the priests and the judges…and, behold, if the wit-ness be a false witness, and hath testified falsely against his brother; then shall ye do unto him, as he had thought to have done unto his brother: so shalt thou put the evil away from among you…. And thine eye shall not pity; but life shall go for life, eye for eye, tooth for tooth, hand for hand, foot for foot. (Deuteronomy 19:16-21)

Thus, a false witness who tried to "frame" an innocent man on a capital charge could be sentenced to death. The severity of this "punishment-to-fit-the-crime" was not an isolated example of Mosaic justice.

For example, the ancient Babylonian law-code of Hammurabi (whom some equate with the Bible's Amraphel4), decreed that "if a man has borne false witness in a trial, or has not established the allegation that he has made, if that case be a capital trial, that man shall be put to death" (Hammurabi's Code of Laws, Section 3). Also, under ancient Roman law, the Twelve Tablets of Rome provided: "Whoever is convicted of speaking false witness shall be flung from the Tarpeian Rock." False testimony is not to be taken lightly!

False Testimony Against the Creator

Do these principles of false testimony apply to the creation-evolution controversy? Quite a bit, actually. In short, false testimony within the church since Darwin's generation has accommodated his materialist challenge to God's role as Creator. The Apostle Paul wrote that God has provided everyone with proof of creation and His creatorship, proof so strong that suppressing it is adjudged inexcusable (Romans 1:19-20, 25, 28).

Historically, false witnesses have enabled Darwinism's monopolization of educational institutions throughout the secular academic world. Worse, many false witnesses have also facilitated the "dumbing down" and Darwinian accommodation of Christian theology in religious circles.5

A Pig Is Still a Pig

Sadly, among Christian seminaries, colleges, and even churches, the teaching of Darwinian evolution in any form has historically been welcomed in many ways that dishonor Christ. How so? Recall how Aaron sacrificed truth and dishonored the Lord when he led the rebellious Israelites to worship a golden calf6 that supposedly "evolved" while Moses was absent.7 Notice that Aaron labeled the "spontaneously-generated" golden calf "the LORD" and not "Baal" in order to excuse the idol's inclusion into Israel's religious practices. Yet a golden calf statue, whether called "Baal" or "the LORD," is still a golden calf statue. A gold-ring-snouted pig is still a pig.

Likewise, any theistic evolutionary explanation for origins--regardless of its label as "progressive creation" or "day-age creation"--is just a nicer name for compromise. Aaron's sin is called syncretism, a blending of pagan religion with biblical religion, which is exactly what theistic evolution is. It is false testimony about God the Creator.

Syncretistic teaching compromises God's revealed truth--sometimes contradicting biblical data that prove the young age of the earth.8 Such syncretism is a "hybrid" religion like the Samaritans' religion, which Jesus Himself condemned (John 4:19-26). The Samaritans mischaracterized God's character and His proper worship (as theistic evolution does today). As many historical and contemporary examples illustrate, the error of the Samaritans is repeated by all who adulterate Bible-based truth with pagan evolutionary concepts.9

Placing Tradition Over the Text

A related type of false witness is the Pharisee-like churchman who adds unbiblical traditions to God's Word (such as the "gap theory") so that the true force of the Bible is nullified (Mark 7:3-13). Unlike the heterodox Samaritans, the Pharisees appeared to be doctrinally "orthodox" in their view of the canon and authority of Scripture. However, as Christ explained, the actual practice of the Pharisees nullified the Bible's text and authority, obscuring biblical truths by illegitimate adherence to their own invented concepts, thus treating Jewish tradition as superior to the Word of God.

Another type of false witness is the Sadducee-like churchman who detracts from the authority and text of Scripture by denying the Bible's authority and applicability (Mark 12:18-27; Luke 20:20-40). Jesus condemned this error as both ignorance and bad theology (Matthew 22:29). This error can be sophistically accomplished by evasive teachings (e.g., the slippery "emerging church" and the neo-deistic Intelligent Design Movement) that avoid recognizing the authoritative truth, perspicuity, and applicability of relevant Scriptures.

Life will certainly put us "on trial" at times, allowing us an opportunity to testify of the Creator's majesty and authority. How should we then testify? Attempting to accommodate Darwinism by suppressing known evidence (whether special revelation in the Holy Bible, or general revelation in nature's design) leads one to perpetuate false testimony. A very dangerous idea indeed!

To clearly and consistently tell the truth--the whole truth--is our obligation, as faithful witnesses of our Creator Redeemer.