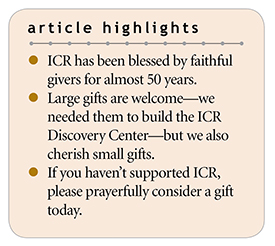 A Google search on charitable giving will produce countless websites. It’s astonishing how much information exists about organizations dedicated to worthy causes. It seems that most are devoted to big-money donations. I suppose there’s wisdom in that—big money makes it possible for larger programs to reach more people. But is bigger always better?

The danger in this approach is that larger programs require bigger budgets, and bigger budgets demand more money to sustain those larger programs, which...well, you get the picture. For Christian organizations, the resulting cycle can become self-destructive because it shifts the ministry focus toward meeting budgetary goals rather than concentrating on the ministry the Lord called us to. ICR seeks to remain true to His Word and strives to exercise careful stewardship of what has been given to us so that only God is glorified in the end.

Please don’t misunderstand me—we welcome large donations. Large gifts were needed to build the ICR Discovery Center for Science & Earth History, and the Lord provided! Yet, we know huge gifts aren’t possible for most people. And gifts of any size can be unbiblical if given in the wrong spirit. Consider the words of our Creator as recorded in Mark 12:41-44:

Now Jesus sat opposite the treasury and saw how the people put money into the treasury. And many who were rich put in much. Then one poor widow came and threw in two mites, which make a quadrans. So He called His disciples to Himself and said to them, “Assuredly, I say to you that this poor widow has put in more than all those who have given to the treasury; for they all put in out of their abundance, but she out of her poverty put in all that she had, her whole livelihood.”

Christ wasn’t impressed with the large amounts given by the rich because they “put in out of their abundance” and had plenty left over to maintain their lavish lifestyles. Rather, Christ was so impressed by the widow’s mite that He called His disciples over to point this truth out to them: God measures a gift not by its size but by the motive with which it is given and the amount left ungiven. The widow’s two mites were more valuable than all the other gifts because, in her poverty, she gave “all that she had, her whole livelihood.”

In this age of bigger is better, perhaps some are reluctant to give “too small” a gift, believing such amounts can’t do much good for the Lord’s work. Yet, the widow’s example clearly shows God isn’t interested in size but in motive and proportion. Consider the following: For those who are currently receiving our material but haven’t yet partnered with us, please know if only 10% gave $10 per month, the Lord would use you to increase ICR’s ministry budget by over one million dollars per year. And if 100% were able to give just $5 per month, our resources would more than double. Many “mites” add up and can become mighty for our Lord’s work!

For almost 50 years, ICR’s ministry has been supported by those who share our passion to proclaim the wonders of God’s creation. We carefully apply the resources the Lord provides through His people so that many can be brought to a saving knowledge of Him. If you haven’t already, won’t you prayerfully consider joining us? Your help will make a difference for the cause of Christ.