Skeptics mockingly poke fun at the King James Bible’s mention of unicorns, accusing the Bible of being unscientific.1,2 Such ridicule is readily refuted, however, by Hebrew vocabulary and zoological history.

The scoffer’s ridicule of unicorns relies upon this flawed reasoning:

Assumption A: If the Bible is perfectly true and credible, it would not report unicorns as real animals.

Assumption B: The Bible reports unicorns as real animals.

Conclusion: Therefore, the Bible can’t be perfectly true and credible. 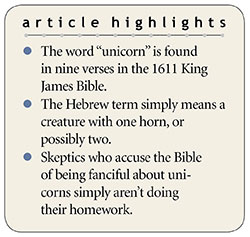 Besides other sophistic sleights, this syllogism employs what is known as a straw-man fallacy,3 implying that the English term unicorn is the core of the controversy—rather than determining what the Hebrew noun re’e¯m actually means.4

Assumption B additionally contains a bait-and-switch fallacy, assuming that imaginary unicorns of fairy tales and cartoons must match the Bible’s re’e¯m. Yet, relevant Bible passages show re’e¯m was more like a wild bovine or rhinoceros, never portraying some kind of spiral-horned horse.4

Could the unicorn of the King James Bible be a rhinoceros, perhaps a one-horned variety? Consider the primary definition of unicorn in the 1828 edition of Noah Webster’s dictionary:

Unicorn: 1. An animal with one horn; the monoceros. This name is often applied to the rhinoceros.5

Rhinoceros traits, it turns out, fit the traits of re’e¯m as reported in Scripture. However, unlike the English word unicorn, which is based on a Latin term meaning “having one horn,” the noun re’e¯m does not demand a one-horned beast. So, maybe re’e¯m was a two-horned rhino.5,6

Could the scriptural unicorn be a wild, horned bovine? A plausible candidate is the now-extinct aurochs2 or one of its wild progeny, such as bison.7 Both are horned (see Psalm 22:21; Deuteronomy 33:17), powerfully built (Numbers 23:22), and biologically comparable to domesticated bovines (Psalm 29:6; Isaiah 34:7). Harnessing such undomesticated bovines to plow field furrows would be a farmer’s futile folly (see Job 39:9-10).

Could the scriptural unicorn be a wild, horned bovine? A plausible candidate is the now-extinct aurochs or one of its wild progeny, such as bison.

So, what does this prove? First, the skeptic’s uniformitarian fallacy disqualifies anachronistic criticisms of Job 39:9 and other Scriptures that refer to re’e¯m.

Second, the skeptic’s attempt to equate the English term unicorn as used in 1611, when the King James Bible was translated, to a spiral-horned horse is a bait-and-switch-facilitated straw-man challenge because there are plausible candidates among real-world animals that fit the traits of the Bible’s re’e¯m. Consequently, the scoffer’s narrow caricature of biblical unicorns misses the point, pardon the pun.