The concept of a pre-Flood floating forest ecosystem has been promoted in creationist literature for several decades and is often used as an explanation for the massive carboniferous coal beds found across the globe. However, this hypothesis wasn’t adequately tested until three recent geological challenges were presented.1 It appears the floating forest hypothesis has difficulty explaining a large portion of the available geological data.

What is the floating forest? Scientists have shown that the dominant plant species of the carboniferous coal deposits were arborescent lycopods (scaly-barked trees) that could achieve heights of over 100 feet (34 meters). Advocates of the floating forest believe these now-extinct trees with their spiraling root systems somehow formed floating mats, growing more densely than do trees in modern forests. But most importantly, they believe the trees had hollow trunks and roots that provided sufficient buoyancy to enable a vast floating tree-and-plant biome to cover much of the pre-Flood oceans.2

In Situ or Not In Situ?

Many upright fossil trees found associated with coal seams are interpreted by secular science as being in the “growth position,” commonly referred to as in situ trees. Secular paleontologists use this claim as evidence against the global Genesis Flood, even arguing that fossil in situ trees demonstrate an autochthonous (in original position) origin for coal. Creation scientists have countered with evidence supporting the allochthonous (moved from source) origin of coal, showing that many claimed in situ trees are better explained by active transport of trees and other vegetation during the global Flood after they were stripped free from the land.

Further empirical support for the allochthonous origin for upright fossil trees came soon after the 1980 eruption of Mount St. Helens. Dr. Steve Austin estimated that more than 19,000 upright and randomly spaced trees accumulated in the sediment on the bottom of Spirit Lake within just a few years. These trees became waterlogged and sank upright because of their heavier bases and roots. He also postulated that if these trees were buried by additional sediment, in time they would give the appearance of an in situ forest.3

Criteria for In Situ Trees

In a recent paper published in the Creation Research Society Quarterly, we identified seven criteria to determine if fossil trees were transported or merely buried by Flood sediments in situ.4 The identification of an in situ site wouldn’t necessarily invalidate the allochthonous origin of coal beds; it would merely represent a location where the tops of the trees were sheared off, leaving the trunks and stumps buried in place. Fossil trees that fulfill all, or at least most, of these criteria likely represent true in situ assemblages. The criteria are: 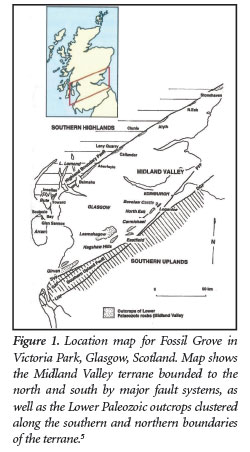 We identified one particular site in Glasgow, Scotland, that meets nearly all the criteria, including the lack of Flood sediments beneath the tree-root layer.4 This site appears to be the remnants of a pre-Flood forest, with the fossil trees still rooted in a pre-Flood soil layer now lithified to rock. Fossil Grove, as it is called, is located in Victoria Park (Figure 1). It’s likely the best-preserved example of an in situ lycopod forest in the world,6 and possibly the first identified in a flood context.

Fossil Grove was discovered in 1887 when a path was cut across an abandoned quarry outside Glasgow.7 After excavation down to the common soil horizon containing the tree stumps and roots, a building was constructed to protect them and allow public viewing. The site consists of a monotypic assemblage of multiple lycopod tree stump casts with attached axial root systems.6

The 11 single-species stumps were found in growth position spacing as opposed to random spacing (Figure 2). The trees are all in one common rock layer, and the root systems penetrate downward into the soil horizon similar to modern root systems. As opposed to allochthonous deposited trees, the roots are not broken off near the trunks but instead are intact like those of living trees. The encasing sandstone layer on top of the forest site contains ripples and oriented, broken trunk fragments indicative of a high-energy flow system directed toward the southwest. The tree stumps are also consistently distorted in a southwesterly direction, matching the paleo-flow of the floodwater currents. This indicates all of the trees were likely in place prior to burial by the encasing sandy sediments of the global Flood. 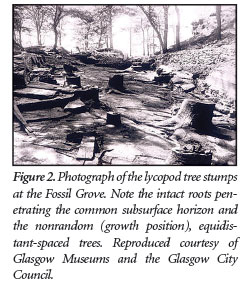 It is significant that the roots are not distorted in a southwesterly direction like the stumps. If the tree stumps, roots and all, were transported in and deposited, there should be a consistent southwest distortion to both trunks and roots. The lack of directional distortion in the roots suggests that the trees were rooted in the forest soil prior to burial.6

Lycopod Trees Were Not Hollow

Another line of reasoning put forth in support of the floating forest hypothesis is that the arborescent lycopods were hollow in both their main aerial trunks and in their roots—a contention based primarily on speculation and not soundly supported by the scientific literature. The majority of the “hollow tree” studies do not take into account a number of key reports describing the non-hollow internal structure of lycopods. Research has demonstrated that intact, non-decayed aerial stems of arborescent lycopods clearly indicate a contiguous tissue structure across the breadth of the stem, with the same general schema found in trunks and roots.

In fact, it is now apparent that the initial stages of the global Flood would likely have caused a great deal of plant death followed by decomposition of easily destroyed tissue in the internal cortex region of lycopod trunks and roots. The aerial structures and root systems would have undergone selective tissue decay in the central cortex while retaining overall morphological shape during the hollowing process. At that time, sediments were introduced into the cavity, creating casts. In effect, it would have resulted in the hollow-looking tree fossils that are commonly observed.

The sedimentation data indicate that Fossil Grove is a preserved remnant of a pre-Flood forest that was not inundated and buried until approximately midway through the rising portion of the Flood.4 Allochthonous layers of coal were later deposited on top of the trees as part of the Scottish Coal Measure Group. This data-driven interpretation supports the idea that as the floodwaters increased, tsunami-like waves tore the bulk of the lycopod forests free and deposited them allochthonously elsewhere as coal beds.1 As is the case with Fossil Grove, the lycopod tree trunks were broken off, allowing substantial decay of the stumps to have occurred prior to burial.6 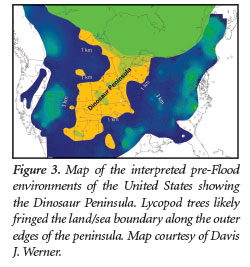 Fossil Grove would be the first documented in situ preservation of a pre-Flood soil with plants. However, it doesn’t support the floating forest hypothesis since the tree roots of the 11 stumps are found embedded with intact root systems throughout a common horizon. There is strong evidence to demonstrate these stumps are in the growth position and were inundated, buried, and fossilized in situ by rising floodwaters.

All available geological and fossilized anatomical data support the existence of pre-Flood lycopod forests rooted in soil. These forests were likely located in wetlands and/or coastal lowland areas along the fringes of land masses such as the Dinosaur Peninsula (Figure 3).1 Detailed analysis further demonstrates the trunks and the roots were not hollow as previously claimed. Based on these studies, we recommend abandoning the floating forest model.1,4