The SETI (Search for Extraterrestrial Intelligence) Institute announced December 5, 2011, that it will begin monitoring radio waves that it hopes might be sent out by life forms on a planet recently discovered by NASA. The Allen Telescope Array at Hat Creek Observatory near Redding, California, had been shut down since April 2011 for lack of funding by NASA, but has now raised monies from independent supporters and negotiated a deal with the U.S. Air Force in order to start operations once again.1

The search for extraterrestrial life is one of the foundational missions of NASA that drives not only the SETI project but also motivates many of the missions to the planets.2 Carl Sagan was a principal investigator of the Voyager program, one of the most successful early missions to fly by the planets of the solar system. The mission was heavily influenced by his interest in finding extraterrestrial life. The Voyager 1 and Voyager 2 spacecraft are currently at the outer edge of the solar system and carry plaques on them with a message to be read by any extraterrestrials who might find them.

Carl Sagan was a strong advocate of the search for extraterrestrial intelligence because he believed there was no evidence for God and that evolution explained our existence. He told me in 1994 on the 25th anniversary of the SETI program which he helped sponsor, “We’ve been looking for intelligent life beyond the earth for over 25 years now, but we haven’t found any. There must be something special about the earth. I would be happy to find even stupid life!”3

The SETI radio telescope was brought out of mothballs because of the recent report that Kepler-22b, an earth-like planet, was found orbiting the “habitable zone” of the sun-like star KIC 10593626 about 600 light-years from earth.4,5,6 The position of the field of view in the sky is in the Cygnus-Lyra region just above the galactic plane looking down the Orion arm of our galaxy. It was reported to be the first planet with a measured radius to orbit the habitable zone of any star other than the sun. 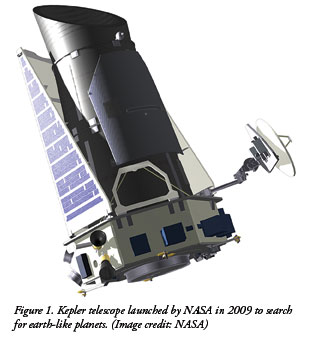 Kepler-22b was discovered by the space telescope Kepler shown in Figure 1. Since its launch by NASA in 2009, over 1,200 candidate planets have been analyzed in sizes ranging from smaller than earth to twice as large as Jupiter and with orbital periods from less than a day to more than a year. There have been other planets reported within the last few years, but one or more of their properties seem to challenge the claim that they are fully earth-like. For example, planet Gliese 581g was claimed to be in the Goldilocks zone (not too hot and not too cold) where liquid water could exist on its surface. ICR Science Writer Brian Thomas discussed the problems with this claim in an earlier Acts & Facts article.7 Also, another planet near the star, LkCa 15, was said to be evolving. Thomas discussed the problems with this claim in an online ICR news article.8

Attempts to find other worlds that originate and support life continue to turn up empty. Even if such a planet is found with the proper conditions to support life—a rocky surface, temperatures between the freezing and boiling points of water, moderate pressure, appropriate gases, and no dangerous radiation—it still needs life to originate in some way. The theory of evolution requires life to be generated from inanimate materials and then change into more complex forms. The origin of dumb life is only half the battle for evolutionists. The formation of intelligent life is the other half. But, if any life can be found elsewhere, evolutionists believe it will make the case that evolution produced life on earth.

Up until now, no other planet with the proper conditions for life to exist has been found. But even if one is found, the theory of evolution has not been proven until life has also been found. Consequently, the SETI radio telescope will be trained on the planets the Kepler Project identifies as earth-like to increase the odds of detecting life. Isn’t it strange that astronomers are looking through their telescopes and searching the heavens for a signal containing information that indicates intelligent life exists somewhere beyond earth, while biologists are peering through their microscopes denying that the information they see in DNA molecules was placed there by an intelligent Creator?

Many verses in the Bible tell us that God created man to exercise dominion over this beautiful planet. There is certainly something special about earth. Scripture also implies that God created life on earth alone, not anywhere else in the universe. One verse allows me to say with confidence that intelligent life will not be found elsewhere—“For Christ also hath once suffered for sins, the just for the unjust, that he might bring us to God, being put to death in the flesh, but quickened by the Spirit” (1 Peter 3:18). If Christ died only once here on earth, He could not have died for intelligent life on planets elsewhere. Otherwise, God would be unjust in saving only us on earth. Since God is just and righteous altogether, we on earth must be the only intelligent beings anywhere.