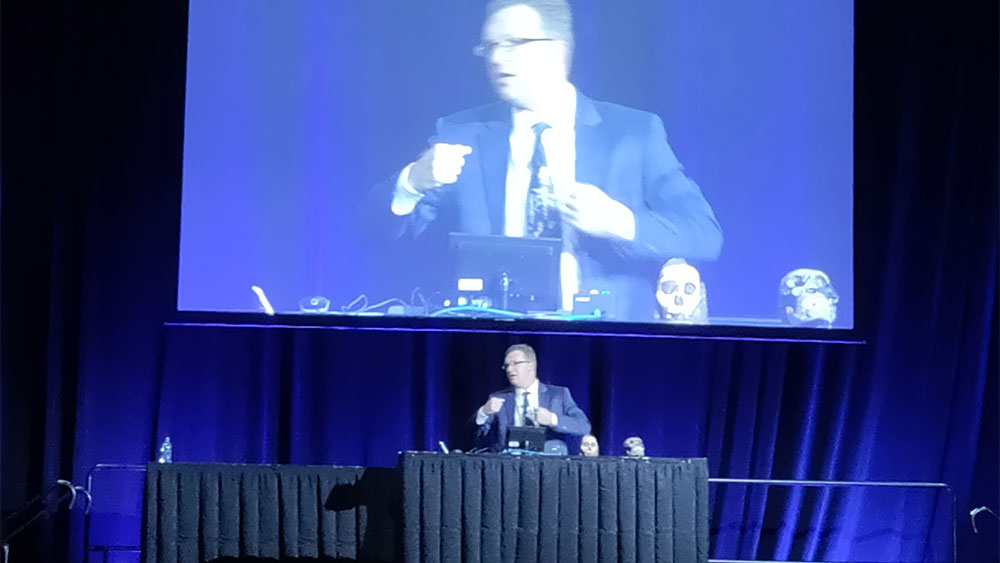 NEWS     CREATION SCIENCE UPDATE     FOSSILS SHOW RAPID AND CATASTROPHIC BURIAL
Anthropologist Wows Scientists
BY BRIAN THOMAS, PH.D. *  |
MONDAY, JUNE 27, 2022
Jeremy DeSilva of Dartmouth College gave an evening presentation at the end of this year’s week-long American Society of Mass Spectrometry conference. As a human fossil expert, DeSilva’s lecture discussed a different topic than what these engineering-oriented scientists typically study. Whether technician or homemaker, everyone wants to understand more about where we all came from.

DeSilva first wowed the crowd with his experiences at the discovery site of Australopithecus sediba. He discussed how the fossil might fit human evolution from ancient African apes. However, plenty of evolutionists doubt that humans came “out of Africa,” and that sediba can even start to solve any problems with human evolution. DeSilva mentioned none of this controversy. Instead, he presented his views as factual.

He told the story of how the sediba remains were discovered—except for the crucial detail that its bones were selected from a mixed bone bed of many creatures. After headlines initially promoted sediba as an important link to our supposed past, analyses of sediba skeletal elements crept into the technical literature. Now, enough have been published to reveal sediba as just a mixture of bones from different creatures.

Certain sediba bones match those already known as Australopiths—extinct apes. Other sediba bones match the shape of humans. DeSilva admitted this in the literature, calling its hip bones “human-like.”1 Sediba had ape ribs, human upper arms and hands, and of course an ape skull. Australopithecus sediba wasn’t a real creature. It’s just a mixture of human and ape bones that never belonged together. This conclusion made the news but not DeSilva’s lecture.2

The closest DeSilva got to admitting this discrepancy was to say it had a “bizarre anatomy.” Indeed, it did—too bizarre for reality. DeSilva said, “In isolation, sediba’s bones would be unremarkable but together they show its unique movement was transitional.” But since they don’t belong together, these bones are unremarkable after all.

The audience saw a computer animation of how this these digitized bones that never belonged together might have awkwardly walked. DeSilva called attention to “Your ancestor from two million years ago” as a factual confirmation of human evolution. Animations of transitional strides masqueraded as impressive science but they reduce to mere imagination.

Meanwhile, hundreds of mass spectrometrists soaked in what looked to them like another proof of human evolution.

DeSilva described the excavation of another fossil: Homo naledi remains from the floor of Rising Star cave in South Africa. During that month, the total number of hominid fossils doubled—mostly isolated teeth. The team estimated that these 2,000 specimens came from 15 individuals. DeSilva’s engaging tones and first-hand stories of exploration and analysis kept the crowd intrigued. What would naledi reveal about human evolution?

Well, not much. Perhaps that’s why DeSilva seemed more excited about sediba.

Naledi had human hands,3 feet, hips, and brain shape. However, the fossil heads, shoulders, and knee joints were tiny. DeSilva admitted that at first he “was convinced” they had found the missing link. A tiny, ape-size head perched on a small human frame was poised to fill the long-missing gap between apes and people.

But for the naledi remains to be real missing links, they must date from two million years ago. And they didn’t. The dating team landed on an age of only several hundred thousand years for naledi.4

Presenting the published ages as science-based fact, DeSilva disclosed none of the discordant results that the dating team had to navigate. Contradictory “age” indicators ranged from 33,000 to 849,000 years! They agree neither with each other nor with the actual biblical age.

Judging by the looks on attendees’ faces and by their follow-up questions after the lecture, these engineers seemed to regard these age-dating processes as equally scientific to their own repeatable experiments. In reality, since the anthropologists couldn’t find “age” numbers to match the two million they were hoping for, they just grabbed some numbers from the middle of a pile and ignored the rest. That’s not science. History is not repeatable.

No matter. The big picture of human evolution never seems to find support from new discoveries, comparative anatomy studies, or age-dating alphabet soup. Instead, it gets new coats of paint from artful selection of which details to conceal in order to tell a favored story. Had the controversies that swirl around DeSilva’s two featured fossils been disclosed instead of closeted, this audience’s faith in human evolution may have suffered doubt. And we can’t have that.

*Dr. Brian Thomas is Research Scientist at the Institute for Creation Research and earned his Ph.D. in paleobiochemistry from the University of Liverpool.
The Latest
NEWS   ACTS & FACTS   PODCASTS

CREATION PODCAST
The Secrets of the Cell | The Creation Podcast: Episode 29
Cells are the basic organisms of life and in some groups they are organisms. What is a cell? What goes on inside of a cell? Did all life come from a...
BY: STAFF WRITER