The Bible is often regarded as a book of stories based on a primitive people's understanding of the world around them. As such, many people--and even some Christians--believe that it is not a reliable source of history. But science continues to prove them wrong.

The Kings of Israel and Judah ruled during the period of time designated as the Iron Age by archaeologists. Widely separated archaeological excavations in the countries of Israel and Jordan contain late Iron Age (Iron IIb) architecture bearing damage from a great earthquake.1 Masonry walls best display the earthquake's effects, especially those with broken ashlars or displaced rows of stones, walls that are still standing but are leaning or bowed, and collapsed walls with large sections still lying course-on-course.

Earthquake evidence is seen prominently at Hazor, Israel's largest ancient city. In excavations beginning in 1955 by archaeologist Yigael Yadin, twenty-two successive cities were discovered to have been built on top of each other.2 Excavations in Hazor's Stratum VI revealed tilted walls, inclined pillars, and collapsed houses. In the Iron Age building called "Ya'el's House" within Stratum VI, objects of daily use were found beneath the fallen ceiling. General southward collapse within Stratum VI argues that the earthquake waves were propagated from the north. After more than 50 years of excavations at Hazor, earthquake damage continues to be revealed in even some of the strongest architecture.

The city of Gezer was also severely shaken. The outer wall of the city shows hewn stones weighing tons that have been cracked and displaced several inches off their foundation. The lower part of the wall was displaced outward (away from the city), whereas the upper part of the wall fell inward (toward the city) still lying course-on-course.3 This indicates that the wall collapsed suddenly.

Earthquake debris at six sites (Hazor, Deir 'Alla, Gezer, Lachish, Tell Judeideh, and 'En Haseva) is tightly confined stratigraphically to the middle of the eighth century B.C., with dating errors of ~30 years.4 So, the evidence points to a single large regional earthquake that occurred about 750 B.C. The accompanying map displays the site intensity (Modified Mercalli Intensity from archaeology or literature) and lines of equal intensity of shaking (isoseismals). 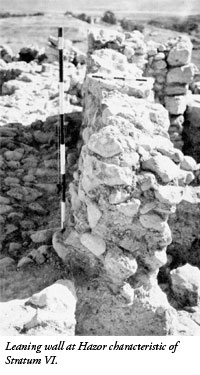 Using the pattern and the intensity of damage through the region of the earthquake, the earthquake's magnitude can be estimated. Through a process known as scaling, the damage areas of smaller historic earthquakes of known magnitude are used to scale upward to estimate the area of damage and magnitude of the regional earthquake. Based on this method, the earthquake in question was at least magnitude 7.8, but more likely was 8.2.5 This magnitude 8 event of 750 B.C. appears to be the largest yet documented on the Dead Sea transform fault zone during the last four millennia. The Dead Sea transform fault likely ruptured along more than 400 kilometers as the ground shook violently for over 90 seconds! The urban panic created by this earthquake would have been legendary.

In the mid-eighth century B.C., a shepherd-farmer named Amos of Tekoa de livered an ex tra ordinary speech at the Temple of the Golden Calf in the city of Bethel in the northern kingdom of Israel just "two years before the earthquake" (Amos 1:1). Uzziah was king of Judah and Jeroboam II was king of Israel. Amos spoke of the land being shaken (8:8), houses being smashed (6:11), altars being cracked (3:14), and even the Temple at Bethel being struck and collapsing (9:1). The prophet's repeated contemporary references to the earthquake's effects is why it bears his name.

Amos' Earthquake impacted Hebrew literature immensely.6 After the gigantic earthquake, no Hebrew prophet could predict a divine visitation in judgment without alluding to an earthquake. Just a few years after the earthquake, Isaiah wrote about the "Day of the Lord" when everything lofty and exalted will be abased at the time when the Lord "ariseth to shake terribly the earth" (Isaiah 2:19, 21). Then, Isaiah saw the Lord in a temple shaken by an earthquake (Isaiah 6:4). 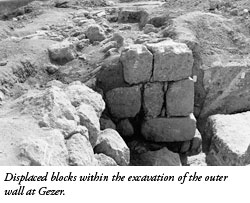 Joel repeats the motto of Amos: "The Lord also will roar out of Zion, and utter his voice from Jerusalem," and adds the seismic theophany imagery "the heavens and the earth shall shake" (Joel 3:16; compare Amos 1:2). After describing a future earthquake and panic during the "Day of the Lord" at Messiah's coming to the Mount of Olives, Zechariah says, "Yea, ye shall flee, like as ye fled from before the earthquake in the days of Uzziah king of Judah" (Zechariah 14:5). The panic caused by Amos' Earthquake must have been the topic of legend in Jerusalem, because Zechariah asked his readers to recall that terrifying event 230 years later.

The author of Hebrews asks us to keep in mind the coming cosmic shakedown that will finally usher in the future "kingdom which cannot be moved" (Hebrews 12:28). In light of God's marvelous promises to those who believe, "let us have grace, whereby we may serve God acceptably with reverence and godly fear."

Oppositions of Science
The Apostle Paul warned Timothy about pseudoscience and “false knowledge.” Today, many twist the meaning of Scripture to promote their...
BY: HENRY M. MORRIS III, D.MIN.

Innate Speed-of-Sound Engineering Revealed in Bats
Bats have the amazing ability to accurately and consistently detect the speed of sound.1 This enables them to employ a complex system of echolocation...
BY: JEFFREY P. TOMKINS, PH.D.

DNA in Sheep and Dinosaurs
About 1,600 years ago, salt miners in Iran apparently left their lamb lunch down the shaft. Their loss became scientists' gain. The now-mummified sheep...
BY: BRIAN THOMAS, PH.D.
More Impact