Over a million people have viewed the NASA video "Walking On Air," which features stunning arctic and Antarctic auroras photographed from the International Space Station.1 They look like glowing green metallic clouds swirling high above broad stretches of Earth's poles. New evidence confirms that, like Earth, Saturn's magnetic field helps create its own auroras. This space spectacle attracts a more fundamental question about where its magnetic field came from in the first place.

Though Saturn is incredibly distant, the Hubble telescope was able to record its auroras in unprecedented detail. It is now clear that Saturn's auroras, best seen in ultraviolet (UV) wavelengths, form when solar outbursts collapse its "magnetotail," the portion of its magnetic field and attending electrified gas that flows in the planet's wake.

A Leicester University News Release noted that the collaborating scientists will publish their photographic results in Geophysical Research Letters. It stated that Saturn's collection of newly captured dramatic light displays "smoking gun" evidence that confirms a magnetic field at the source.2 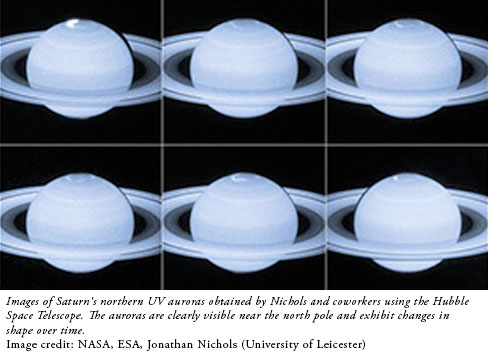 Magnetic fields can be created by running electrical current through copper coils, but it fades as soon as the battery runs down. Certain types of metals can store a magnetic field for a time, as in a bar magnet. But even these long-lasting magnetic fields decay over time. What about Saturn?

Physicist Russell Humphreys recently described this long track record of dynamo model failures in the Proceedings of the Seventh International Conference on Creationism.3 He wrote, "In particular, the section above, ‘The heart of dynamo theory isn't beating,' offers quantitative reasons why the most viable form of dynamo theory appears to be dead."3

Dynamo theories that attempt to explain planetary magnetic fields posit metal-rich molten material swirling round and round deep inside a planet. Like the copper coils of a generator, this could induce an electrical current that would produce its magnetic field. "Turbulent dynamo theory" looks like the best candidate among them. However, Dr. Humphreys found that getting its formula to output a millions-of-years-long magnetic field requires inputting totally unrealistic values for one or more required factors.4

In 1984 Humphreys proposed an alternative magnetic model involving God aligning water molecules during the creation week. It accurately predicted the recently measured magnetic field strengths of Uranus, and Neptune, as well as the decay rate of Mercury's magnetic field.5

Flood Solves Mystery of Amazon Sea
In the past 15 years, it’s been determined that a vast ocean once covered the western Amazon drainage basin.1 However, studies of the...
BY: TIM CLAREY, PH.D.
More Creation Science Update

Deep-Sea Lobster Microbiome
Research continues regarding complex and amazing microbiomes found on or within a variety of creatures.1 The microbiome is a microbial community...
BY: FRANK SHERWIN, D.SC. (HON.)
The Latest
NEWS   ACTS & FACTS   PODCASTS