In 2010, the BioLogos Foundation published an article by old-earth geologists Gregg Davidson and Ken Wolgemuth presenting four supposedly unanswerable arguments for an old earth.1 However, creation scientists can reasonably address their challenges.

Their first objection, the existence of salt deposits within the sedimentary rock record, can plausibly be answered by the extrusion of supersaturated brines from within the earth’s interior as the “fountains of the great deep were broken up” during the Genesis Flood (Genesis 7:11). Upon coming into contact with cold ocean water, these salts would have precipitated out of solution, quickly forming enormous salt deposits.2

Their second argument, that layering patterns in Grand Canyon can’t be explained by a single flood, is frankly somewhat confusing and downplays recent well-drilling results.3 Their third argument is that the sequence of fossils is too orderly to be the result of the Genesis Flood. Although creationists do acknowledge a general pattern in the fossils, this pattern is better explained as a result of progressive flooding of different ecological environments—especially since fossils of land creatures are often found in marine sediments (and vice versa) and fossils are often found in locations that contradict evolutionary expectations.4,5

However, Davidson and Wolgemuth (D&W) also claimed that varves within a Japanese lake prove that the earth is at least 50,000 years old. Varves are repetitive groups of laminations within sediments that are assumed to represent successive annual deposits. D&W claimed that since 50,000 varves had been identified within mud from this lake, the earth must be at least 50,000 years old. Is that true?

Before answering that question, I should note that the following presentation is a summary of a technical paper that may freely be read online.6 Space does not permit us to list all the relevant citations here, but they are included in the technical paper.

Lake Suigetsu is a large lake located near the coast of the Sea of Japan that is about 34 meters (112 feet) deep at its center. Scientists drilled and extracted a core 75 meters (246 feet) long from the lakebed, enabling them to examine the layering patterns within the sediments. The sediments from the lakebed consisted of gray clay interspersed with white layers made up of the remains of algae called diatoms. Scientists assumed that each gray and white “couplet,” or varve, represents one year, with the white diatom layer forming during the spring and the gray layer forming during the fall/winter.

Are These Really Annual Layers? 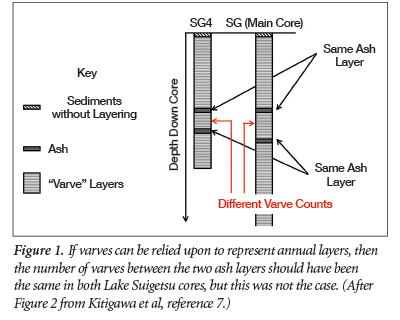 Actually, the original researchers only reported 29,100 varves, although later researchers claim to have counted more than 50,000. In any case, there are good reasons to believe that many of the varves are not annual events. For instance, scientists drilled side cores next to the main core. Two different volcanic ash layers, representing two volcanic eruptions, were identified in the main core and one of the side cores. When each of the volcanoes erupted, its ash settled on the floor of the lake. Thus, the ash layers corresponding to each eruption should be the exact same age, even in different cores. If the counted varves really are reliable age indicators, then the number of counted varves between the two ash layers should be the same in both cores—but they aren’t (Figure 1).7

Later researchers acknowledged that as many as half the counted varves could not be clearly distinguished. When they encountered this problem, they assumed a constant sedimentation rate to “fill in” the gaps. Therefore, the true number of counted varves was much less than the 50,000 claimed by D&W, probably between 15,000 and 25,000.

Could These Layers Form Since the Flood?

Under the right conditions, tens of thousands of varve-like layering patterns could form in the 4,500 years or so since the Genesis Flood. The Flood/Ice Age model predicts an enormous amount of closely spaced volcanic activity in the centuries after the Flood, as well as extremely dry, windy conditions at the end of the Ice Age.8 This is important, because volcanic ash and dust are rich in silica, the main ingredient diatoms use when constructing their skeletons. Therefore, the Ice Age provides the opportunity for thousands of non-annual diatom blooms to occur in a few centuries, plausibly explaining the white diatom layers observed in the Lake Suigetsu sediments.9 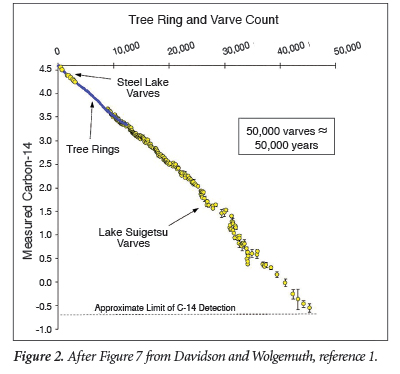 But D&W added a “twist” to their argument. Scientists radiocarbon-dated leaf, branch, and insect fossils within the Lake Suigetsu sediments. D&W converted these radiocarbon ages into what they called “measured carbon-14” and then plotted those values against tree ring and varve calendar ages in their Figure 7 (our Figure 2).

D&W argued that since the yellow dots fell on a nearly straight line, this proved the radiocarbon ages were true calendar ages, at least for the last 50,000 years or so. If this were really true, it would indeed be a strong argument for an old earth. It would also suggest that the conventional assumptions behind radiocarbon dating are correct, in spite of evidence to the contrary accumulated by creation scientists (radiocarbon in dinosaur bones, coal, diamonds, etc).10 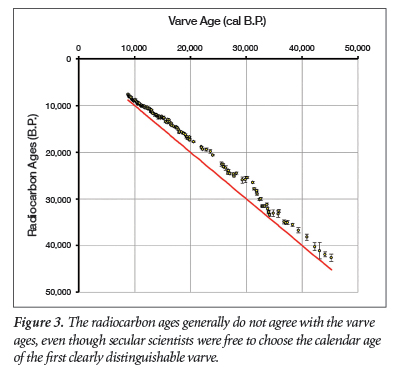 Also, it should have been obvious, even from just the popular science literature, that radiocarbon ages generally do not equal varve ages. Secular scientists are excited about the Lake Suigetsu lake sediments because they hope these sediments will help them “calibrate” radiocarbon ages.11 What does this mean?

Moreover, the varve ages were dependent on the radiocarbon ages. Varves could not be clearly distinguished at the top of the core, and so the first counted varve was located at a depth of 10.4 meters below the core top. Researchers then assigned an age of 8,830 years to this particular varve. One of the papers cited by D&W explains:

The absolute age of the LS [Lake Suigetsu] floating varve chronology has been determined by wiggle-matching 22 14C dates from the younger part of the LS sediment to the revised German oak 14C calibration curve.12

In other words, researchers experimented with different ages for the Lake Suigetsu varves. Then they picked the chronology that gave the best possible match between the Lake Suigetsu data and the German oak radiocarbon calibration curve. This particular match occurred when they assigned an age of 8,830 years B. P. (Before Present) to the varve at a depth of 10.4 meters in the Lake Suigetsu core. This is obvious even in D&W’s own Figure 7 (our Figure 2). The yellow dots labeled as “Lake Suigetsu varves” do not start at 1, as one would expect from a simple counting process. Rather, the varve count starts at 8,830, a little to the left of the 10,000 on the horizontal axis.

Furthermore, the German oak tree-ring chronology was used to construct the radiocarbon calibration curve (the blue line labeled “tree rings” in Figure 2).13 The Lake Suigetsu varve counts aligned well with the blue line because they were made to align!

So, contrary to D&W’s assertion, the Lake Suigetsu varve ages were not determined independently of the radiocarbon ages.

What about the Steel Lake Varves?

Likewise, we shouldn’t be impressed by the good alignment between the blue line and the handful of yellow dots in the upper left-hand corner of Figure 2. This same alignment is shown more closely in D&W’s Figure 5 (but not shown here). The yellow dots corresponding to the varve data from Steel Lake, Minnesota, did not originally fall on the blue line. This agreement was obtained only after secular scientists “adjusted” the Steel Lake values to make them agree! But D&W neglected to point this out to their readers, although it should have been clear just from the abstract of the paper they cited:

These results, together with other varve studies, demonstrate that an independent age-determination method, such as 14C dating, is usually necessary to verify, and potentially correct, varve chronologies.14

D&W’s whole argument hinges on varve ages being independent of radiocarbon ages, but the very papers they cite show that this was not the case!

We could say more about this subject, and D&W’s paper contains at least one other major mistake.15 Table 1 provides a “reality check” on their claims.

It is a shame that BioLogos has been using such a fallacious argument to dissuade Christians from trusting the straightforward history recorded in Genesis, but perhaps we can learn a lesson here—fallacious arguments can seem very convincing, even though they are wrong. Christians should never be intimidated into accepting the latest “scientific” claims that contradict the clear teaching of Scripture. When these claims are examined more carefully, they are always shown to result from faulty logic and implicit denials of the Genesis record. 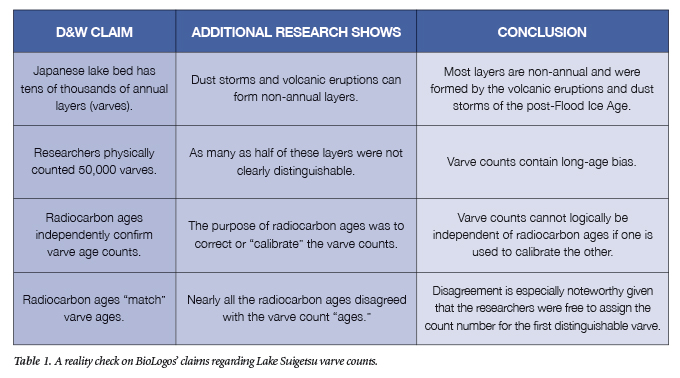