Scenic places fascinate geologists, especially vistas that generate profound thoughts. Sometimes these thoughts challenge our customary ways of viewing our world. On my "top ten list" of favorite places on earth is Red Rock Pass, a little-known landform between two rather unimportant mountain ranges in southern Idaho. Located nine miles east of Interstate Highway 15 on the route north to Pocatello and five miles south of the small farming town of Downey, Idaho, this remote landform commands my attention and challenges my thinking. I celebrate Red Rock Pass for being the collapsed dam and spillway through which an enormous Ice Age lake drained catastrophically. It was the source of the great Bonneville flood.

In Salt Lake City as I look eastward, I see on the western side of the Wasatch Mountains an ancient wave-eroded bench 800 feet higher than the city. That widespread bench was formed by erosion at 5,050 feet above sea level. It marks the old shoreline ("bathtub ring") of ancient Lake Bonneville, the largest Ice Age lake to form within the Great Basin. This old lake was comparable in volume to Lake Michigan, and occupied almost 20,000 square miles in eastern Nevada, western Utah, and southern Idaho. The surface of Lake Bonneville was about one third of the area of Utah. This massive lake attained a maximum depth of 1,000 feet and was 800 feet deep over Salt Lake City. It was among many other, smaller Ice Age lakes of the Great Basin, other noteworthy examples being Lake Lahontan (over the city of Reno, Nevada) and Lake Manley (within Death Valley, California). 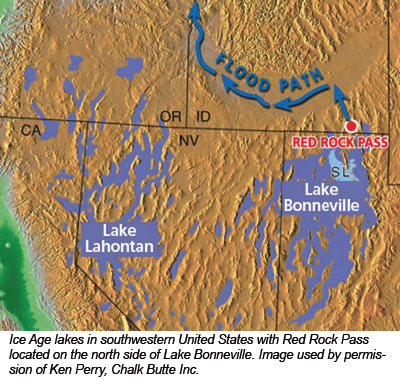 Another widespread wave-eroded bench can be seen at elevation 4,710 feet (340 feet lower than the old Lake Bonneville shore). This lower "bathtub ring" marks the old shore of Lake Provo. Below the Provo shoreline, multiple old shorelines retreat downward to the present level of the Great Salt Lake (elevation about 4,210 feet). The wetter conditions of the post-Flood Ice Age allowed big lakes to exist within the Great Basin. The present Great Salt Lake is the nearly dried-up remnant of Lake Provo.

Still looking east from Salt Lake City, I see no other shoreline evidence between the level of old Lake Bonneville (5,050 feet) and the younger Lake Provo (4,710 feet). It appears that Lake Bonneville emptied abruptly, releasing 340 feet depth of water to reach the lower level of Lake Provo. Terrain analysis of the shorelines of both lakes indicates that the drainage of Lake Bonneville released about 850 cubic miles of water to become Lake Provo.1 Where did this water go? Did it drain in a single event?

Development of a Breach

At the beginning of the colossal prehistoric flood from Lake Bonneville through Red Rock Pass, the spillway first formed as the water level in the lake on the south side reached the 5,100 feet level of the dam. Water may have leaked underground through the dam (a process called "piping" that destroyed Teton Dam) or flowed over the top of the dam (a process called "overtopping"). A notch formed in the top of the dam as erosion occurred because of the massive potential energy within the high lake on the south side of the dam. As the notch in the dam got deeper, so did the discharge. Erosion accelerated as the notch widened to form the spillway. As the dam began to collapse, the spillway enlarged to three-quarters of a mile wide. At the flood's peak, water was released through the spillway at approximately 35 million cubic feet per second,2 more than 4,000 times today's normal flow on the Colorado River in Grand Canyon. The big flood likely lasted for several weeks.

We can follow the path of the Bonneville flood northward from Red Rock Pass into the Snake River of Idaho and Oregon to the Columbia River in Washington and Oregon. Just north of Red Rock Pass, giant gravel bars and flood-sculpted bedrock cliffs show the power and depth of flood deposition and erosion. Significant erosion channels and scour surfaces occur in hard volcanic bedrock on the Snake River plain.3 High silt deposits on the Snake River also indicate the level of this great Ice Age flood. 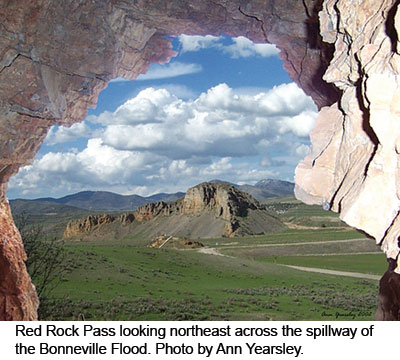 My experience with the evidence for the Ice Age flood of Lake Bonneville helped me understand other catastrophic erosion features associated with breached dams. My three favorite examples of such dams are:

The breached dam at Lange's Crest on the upper North Fork of the Toutle River in Washington State--The mudflow from Mount St. Helens volcano on March 19, 1982, overtopped the debris dam that was deposited within the river valley in 1980. The mudflow eroded the rockslide and volcanic layers to a depth of 140 feet, forming a onefortieth scale "Little Grand Canyon" on the North Fork of the Toutle River.4

The ancient breached ice dam at Sandpoint, Idaho, that released Lake Missoula from Montana--Ice Age glaciers flowing southward in northern Idaho blocked the Clark Fork River, impounding about 500 cubic miles of water and forming a lake of 900 feet in depth over Missoula, Montana. The Lake Missoula flood began when the ice dam failed. The outburst flood destroyed the ice dam, eroding and scarring the 16,000-square-mile Channeled Scabland of eastern Washington. Fifty cubic miles of sediment were moved. Grand Coulee is the most prominent erosional feature (the 50-mile-long trench is one to six miles wide and averages 900 feet deep).5

The breached dam through the Kaibab Upwarp at Grand Canyon formed by drainage of large lakes in eastern Arizona, southeastern Utah, northeastern New Mexico, and western Colorado--Large lakes within the saucer-shaped depression of the Colorado Plateau appear to have contained about 3,000 cubic miles of water. The original breaching of the dam likely began by catastrophic drainage of ancient Hopi Lake in the eastern Grand Canyon.6

My understanding and experience with catastrophic bedrock erosion at Red Rock Pass helped me to better appreciate Grand Canyon as a breached dam. While camping in eastern Grand Canyon with my geology graduate students in April 1985, we discussed the Bidahochi Formation, a large silt deposit at 6,000 feet elevation in northeastern Arizona. We were fascinated by the sedimentary evidence of a very large lake or lakes east and north of Grand Canyon as demonstrated by the silt deposit of the Bidahochi Formation.7 Could the erosion of a bedrock dam by drainage of 500 cubic miles of water from Hopi Lake have breached a channel at the location where we were camped in Grand Canyon?

A case could be made as we remembered Lake Bonneville's shoreline next to Red Rock Pass, only happening on a much larger scale in Grand Canyon. In 1986, I began the process of mapping the possible shore of the giant lakes east and north of Grand Canyon.8 In addition to Hopi Lake east of Grand Canyon, we recognized evidence for at least two large lakes in Utah. The largest of these lakes (what I call Canyonlands Lake9) was in northern Arizona, southeastern Utah, northeastern New Mexico, and western Colorado.

No discussion of the breaching of a 300-foot-high dam would be complete without remembering Charles Darwin's observations in Argentina in April 1834. After reading Charles Lyell's book Principles of Geology during his voyage on the Beagle, Darwin had 16 days to explore the valley of the lower Santa Cruz River. Darwin reported his interpretation of the valley in his journal:

At the first glance of the basaltic cliffs on the opposite sides of the valley, it was evident that the strata once were united. What power, then has removed along a whole line of country, a solid mass of very hard rock, which had an average thickness of nearly three hundred feet, and a breadth varying from rather less than two miles to four miles? The river, though it has so little power in transporting even inconsiderable fragments, yet in the lapse of ages might produce by its gradual erosion an effect of which it is difficult to judge the amount.10

His assumption of slow erosion of the river valley allowed Darwin to extrapolate "the lapse of ages" to speculation on organic evolution later in his voyage at the Galapagos Islands. Darwin became a geological evolutionist before he became a biological evolutionist. Some have called this uniformitarian thinking at the Santa Cruz River "Darwin's first wrong turn."

When you visit an extraordinary place like Red Rock Pass in southern Idaho, expect to ponder some of the greatest issues of science!