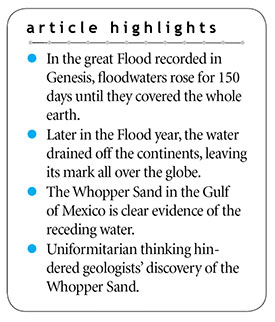 One of the primary objectives of creation apologetics is to corroborate information provided in Scripture. Accordingly, no one should be surprised when geological data match the biblical record of the Genesis Flood, because true science corroborates Scripture.1

One of the primary objectives of creation apologetics is to corroborate information provided in Scripture.

In one case, creationist geology not only supports facts reported in Genesis, it explains why petroleum companies delayed finding billions of barrels of oil because they erringly assumed uniformitarian ideas about where to look for this deep-sea treasure. Specifically Genesis 8:3, relating the recession of the floodwaters, is now supported by petroleum geologists’ stratigraphic data gathered from 1,544 widespread locations across North America, South America, and Africa.2

After 40 days and nights of unprecedented rainfall at the start of the Flood, combined with “the fountains of the great deep [being] broken up,”3 worldwide oceans rose (“increased”), rose more (“prevailed and greatly increased”), and rose even more (“prevailed exceedingly”)!4

Eventually floodwaters overwhelmed (“covered”) what were then Earth’s highest mountains by a depth of 15 cubits.4 The catastrophe’s zenith occurred on day 150, after which the flooding reversed—actively receding until the deluge drained and the landmasses dried out.5

That pivotal reversal left its marks all over the world’s stratigraphic rock layers. One example is “a large, unusually thick and extensive sand body in the deep water of the Gulf of Mexico [7,600–10,000 feet deep]…so large and completely unexpected that the oil industry dubbed it the ‘Whopper Sand.’”2

Whopper Sand [is] a result of this rapid drainage shift at the Zuni/Tejas (K-Pg) boundary, when water suddenly began to drain off the North American continent…into the GOM [Gulf of Mexico], permanently reversing the earlier direction of flow. This shift is marked by the sudden change in deposition from the uppermost Zuni layer (the Lower Paleocene Midway Shale) to the lowermost Tejas (Paleocene-Eocene Whopper Sand). In a Flood model, this would coincide with the change in water direction described for Day 150+ of the Flood.2

Before day 150, transcontinental tides drenched continents with layer after layer of sedimentary sheet washings. “From the end of day 150” (literal Hebrew in Genesis 8:3), a remarkable reversal (“return”) occurred, followed by continual widespread and powerful drainage dynamics.

Initial drainage rates in the Paleocene, coinciding with a sudden drop in sea level at the onset of the Tejas, were likely high volume and highly energetic, providing a possible mechanism to transport the thick Whopper Sand into deep-water. Over time, the drainage volume lessened, lowering the energy available for transport, until the present-day pattern developed.2

Uniformitarian thinking cannot account for the Gulf’s deepwater Whopper Sand formation, so oil companies were slow to discover it.6

If this is a post-Flood deposit, what local catastrophe can explain this massive sand unit?…[T]he size and scale of the Whopper Sand is beyond any deposit like it in the world. The erosive power to produce this much sand and to transport it so far would have likely affected most of the contiguous [lower 48] USA…making it nearly impossible for animal and human survival. As described above, the best explanation for the Whopper Sand is at the onset of the receding water phase of the Flood.2

If earlier Gulf of Mexico explorers had operated from these Flood-geology insights rather than uniformitarian assumptions, they could have found the Whopper Sand formation and its billions of barrels of oil much earlier than they did.6

No one should be surprised when geological data match the biblical record of the Genesis Flood, because true science corroborates Scripture.

Thus, not only can careful research corroborate facts reported in Genesis, sometimes using Scripture-guided science can lead to billions of dollars in black gold.2,6