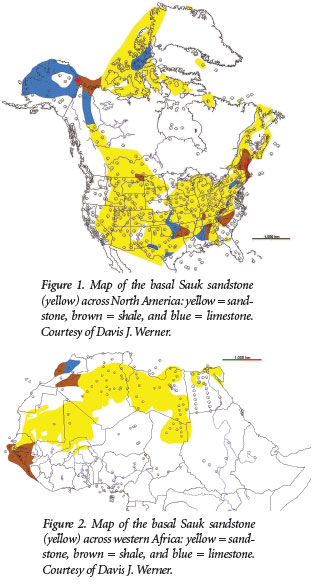 If the Flood were truly global, we should find its sediments on every continent showing simultaneous Flood levels. According to many creation geologists, the continents of Africa and North America were joined together as part of a supercontinent during portions of the Flood year. So, we should observe many similarities in the stratigraphic columns, the megasequences, and in the floodwater levels between the two continents.

What do the rocks show? Although we have only completed northern Africa, we do see some startling results. The two continents’ strata match up; they independently record the same levels of the Flood at the same time and in many cases contain even the same type of sediments. The Sauk Megasequence, the first significant deposit of the advancing floodwaters, exhibits a basal sandstone unit that spreads across a large portion of North America (Figure 1). A similar lowermost Sauk sandstone layer also extends across most of North Africa (Figure 2). Finding the same type of broad, extensive deposit at the exact same time on two large continents is exceedingly strong evidence of a global flood!

Later megasequences across Africa record the relative height of floodwaters as the rising seas progressively inundated more and more land. Early megasequences, such as the Sauk and Tippecanoe (Cambrian through Silurian systems), show less flooding extent compared to the later megasequences, matching the results found in North America.

Offshore sediments began to accumulate along the west coast of Africa during the fourth megasequence (Absaroka, Pennsylvanian-Lower Jurassic systems), recording the opening of the northern Atlantic Ocean as catastrophic plate movement began to rapidly create a new seafloor.3 The timing of the subsequent split of South America from Africa is also observed in the sedimentary record. The first offshore sediments deposited off Africa’s southwest shore (south of Liberia, Ghana, and Nigeria) appear in the Zuni Megasequence, indicating the initial division between these two continents.

The Zuni Megasequence (Jurassic and Cretaceous systems) also shows the maximum areal extent of sediments—the most extensive Flood coverage—possibly indicative of the highest water level. This fifth megasequence may have recorded the activity of Day 150 of the Flood, as described in Genesis 7:19-24, when all the “high hills under the whole heaven were covered.”

Finally, both Africa and North America simultaneously record what appears to be the receding phase of the Flood event in the sixth and final megasequence (Tejas Megasequence, Cenozoic stratigraphic units). The sediments of this megasequence show a major shift in depositional pattern, reflecting more extensive offshore sedimentation as the floodwaters drained from the continents into the new ocean basins. This is when the “whopper sand” formed in the Gulf of Mexico as sheet-like flow poured off the continents.4

Comparison of the stratigraphic columns of Africa and North America show many similarities indicative of a global flood. Water levels seem to have risen and dropped simultaneously across both continents. The observed patterns reflect an undeniable consistency with a global phenomenon. Contrary to the unfounded claims of uniformitarian scientists, the global Flood, as recorded in Genesis, offers the best scientific explanation for the actual rock data.