Proton Problems: Faith in Theories or Reality? | The Institute for Creation Research
Skip to main content

The proton—a positively charged particle found in the nuclei of atoms—continues to present problems for the Standard Model of particle physics. Generally considered a composite particle, it is made up of three subatomic particles known as quarks. Among the zoo of known particles, only the proton, antiproton, electron, positron, neutrinos, and photons appear to be stable. All other particles decay. Even the free neutron (one that is not bound in a nucleus) decays with a 15-minute half-life. The Grand Unified Theory (GUT) of particle physics that seeks to unify all physics under a single model predicts that the proton should decay with a half-life of ~1032 years, but more recent measurements suggest that the half-life must be greater than 5 times 1033 years. Why the proton and its antiparticle should appear to be the only stable hadrons remains a mystery.1 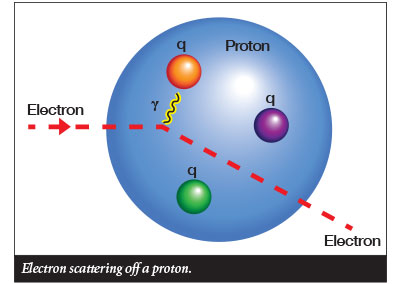 The results from an experiment performed at the Paul Scherrer Institute in Switzerland, using a πE5 proton beam-line to measure the radius of the proton, seem to add to this mystery. Drs. Jan Bernauer and Randolph Pohl attempted to measure the proton’s charge radius via two different experimental methods: Dr. Bernauer, by direct scattering of an electron beam from hydrogen nuclei, and Dr. Pohl, by measuring the Lamb shift in muonic hydrogen.2,3 Both scientists depended upon one of the best-tested theories in physics, quantum electrodynamics (QED), to assist in interpreting their observations. Since the 1940s, QED has successfully predicted the electron magnetic moment to an astonishing accuracy and also explained the Lamb shift of electron orbitals in the hydrogen atom.4

Dr. Pohl and colleagues used a different method termed the Strange Hydrogen Technique. They shot muons at a target of hydrogen gas. Some of the muons were captured in the metastable 2S orbital of hydrogen, which is slightly separated in energy from the 2P orbital state due to the Lamb shift. The energy difference between the 2S and 2P states depends on the Lamb shift and is functionally related to the proton radius. A proton radius of 0.8409 ± 0.0004 fm. was determined from this experiment.

The discrepancy between the two measurements (~4%) doesn’t seem like much, but in subatomic physics it is huge and presents physicists with another problem in understanding the proton. Physicists Ingo Sick and Dirk Trautmann believe we may not fully understand the ramifications of each experimental setup.7

Are some of the models so many physicists have put their faith in (GUT, QED) still tenable or are they breaking down? One would think that history has taught us to be very careful about the object of our faith! Perhaps the proper object of our faith is a “Who” rather than a mysterious “what.”

David's Son
“He shall build an house for my name, and I will stablish the throne of his kingdom for ever. I will be his father, and he shall be my son....
BY: HENRY M. MORRIS, PH.D.
The Latest
NEWS   ACTS & FACTS   PODCASTS