His divine power has given to us all things that pertain to life and godliness, through the knowledge of Him who called us by glory and virtue, by which have been given to us exceedingly great and precious promises, that through these you may be partakers of the divine nature, having escaped the corruption that is in the world through lust. (2 Peter 1:3-4) 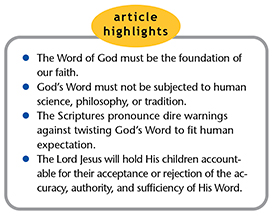 It’s becoming more difficult to find Christian leaders who base their faith solely on the Word of God. Explicit trust in the clear, simple words of the written text appears to have given way to reading many commentaries that seek to justify or promote a variant interpretation of foundational doctrine. Such “scholarship” holds that evidential proof of the accuracy and authenticity of the Scriptures must be documented before others will accept our faith.

Perhaps we need to be reminded how emphatic Scripture’s demand is for total allegiance and submission to the authority of God’s Word. More and more pulpits, classrooms, and influential publications fail to mention the intense prohibitions throughout Scripture against altering or rejecting the written Word of God.

Every word of God is pure; He is a shield to those who put their trust in Him. Do not add to His words, lest He rebuke you, and you be found a liar. (Proverbs 30:5-6)

“For assuredly, I say to you, till heaven and earth pass away, one jot or one tittle will by no means pass from the law till all is fulfilled. Whoever therefore breaks one of the least of these commandments, and teaches men so, shall be called least in the kingdom of heaven.” (Matthew 5:18-19)

For what if some did not believe? Will their unbelief make the faithfulness of God without effect? Certainly not! Indeed, let God be true but every man a liar. (Romans 3:3-4)

The Scriptures contain multiple warnings about allowing outside influences to turn us from submission to the written Word.

I marvel that you are turning away so soon from Him who called you in the grace of Christ, to a different gospel, which is not another; but there are some who trouble you and want to pervert the gospel of Christ. But even if we, or an angel from heaven, preach any other gospel to you than what we have preached to you, let him be accursed. (Galatians 1:6-8)

These warnings are applicable to all who embrace this error, but the discipline is more severe for erring Christian leaders. Leaders who claim to understand the teachings of Scripture should know better!

My brethren, let not many of you become teachers, knowing that we shall receive a stricter judgment. (James 3:1)

You therefore, beloved, since you know this beforehand, beware lest you also fall from your own steadfastness, being led away with the error of the wicked. (2 Peter 3:17)

When the Lord God of the universe, the Creator of the ends of the earth, the King of kings—whose very name is held to be the greatest name among all creation (Philippians 2:9), whose name is not to be taken in vain (Exodus 20:7)—when God says that He has “magnified [His] word above all [His] name” (Psalm 138:2), it does seem wise to respect that Word and honor its message.

Yet today among the core of evangelicals—indeed, among those who claim to hold to the inspiration of the Bible—there are voices of Christian men and women who question the most basic and foundational revealed truth in Scripture: that God created the heavens and the earth (Genesis 1:1). And not merely question the mechanics and events of the creation week, but debate the very words and message of that week. Even more, they question the character and nature of the God of the Bible by attributing to Him the evil, wasteful, chaotic, random, purposeless processes of evolutionary “creation,” making God the author and sustainer of the endless cycles of the death, distortion, and destruction that evolution demands.

Such a hybridization of fact and error cannot be! The Genesis record is incompatible and can’t be harmonized with what’s presented by naturalistic philosophers. These two diametrically opposed systems of thinking and belief can’t be made to blend together. Either one or the other isn’t true.

The most perplexing and distressing phenomenon among the scholars, theologians, scientists, and leading spokespersons on this issue is that Christians are the only ones doing the compromising. Those in the evolutionary camp are not being converted to the biblical message of an omnipotent Creator. They are anchored to the atheistic system that excludes a Creator. The evolutionary thinkers don’t struggle to find a way to harmonize the events of Genesis 1–11 with the words of Charles Darwin or Stephen Jay Gould.

No, the movement to harmonize is among the saints of God. It’s the Christian scholars and theologians who insist that the words of God be aligned with the words of men. It’s the avowed Bible believers who lead their followers down a broad road of compromise with philosophical amalgams like the day age theory or the progressive creation theory. The common thread among all these efforts, including earlier attempts such as theistic evolution and the gap theory, is the attempt to provide a way for the biblical record to fit the long ages necessary for evolutionary activity.

Over the centuries since the Enlightenment dawned in Europe and darkened the minds of theologians and Christian scholars with the “proof” of intellectual reason and the “supremacy” of science, the mainstreams of Christianity (both Protestant and Catholic) have fought fiercely for the approval of secular minds, trying to bring about a reconciliation between faith and science, morality and philosophy, revelation and reason.

As the “higher critics” attacked the authenticity and accuracy of the Scriptures, theologians bent to accommodate the naturalistic interpretation of God’s Word. When scientists swept the creation account into the dustbin of mythology, the theologians found allegorical meaning in the words. And when philosophers rationalized away the absolutes of righteousness and negated the concept of sin, the theologians embraced situational morality and cultural relevance.

Time after time, issue after issue, decade after decade, the Christian theologians were the ones who changed their positions in order to placate the adherents of naturalistic philosophy. Now, after a few decades of opposition by the fundamentalist versus modernist clash, momentum is building again toward secular triumph among the evangelical churches. Science supersedes Scripture when there is conflict. Reason and human intellect triumph over Scripture where there is question about the text. In many churches, experience substitutes for doctrine, and pragmatic function dominates theology.

Instead of “pulling down strongholds, casting down arguments and every high thing that exalts itself against the knowledge of God, bringing every thought into captivity to the obedience of Christ” (2 Corinthians 10:4-5), many Christians are content to remain “children, tossed to and fro and carried about with every wind of doctrine, by the trickery of men, in the cunning craftiness of deceitful plotting” (Ephesians 4:14).

Dear brother or sister in Christ, this ought not to be! There is more proof of the accuracy and historicity of the text of Scripture now than at any other time in Earth’s existence. More work has been done and published than ever before. There’s absolutely no need to retreat into the shallow grave of ignorance and apathy. We should be on the spiritual battlefield, emboldened by the filling of the Holy Spirit, and rejoicing in the power of the gospel!

There are still many churches that stand firm for the Word of God. There are thousands of Christian leaders, scholars, pastors, theologians, and scientists who both love the Lord Jesus Christ and hold to the inerrant Scriptures. There are Christian schools, radio stations, teaching organizations, and mission boards that rejoice in the integrity of the Bible and boldly proclaim their commitment to the absolute authority of God’s revealed Word over life and lifestyle. God is not asleep, His reach is not shortened, nor is His ear dulled to the cries of His people.

The Institute for Creation Research has been at the forefront of this battle for 50 years. Our Lord Jesus has provided “exceedingly abundantly above all that we ask or think” (Ephesians 3:20). The person whom God selects to accept the responsibility for the next generation of ICR’s ministry will demonstrate absolute integrity and commitment to the authority, accuracy, and sufficiency of the Scriptures. After all, it is God’s Word that provides those “great and precious promises” that are the means for us to “be partakers of the divine nature” (2 Peter 1:4). Please continue to pray with us as we proclaim God’s creation truth and prepare for the new leadership He has for us.