Even children learn that plants and animals depend on one another. Plants release oxygen for animals to breathe, and plants make food—mostly sugar—for animals to eat. In turn, animals produce carbon dioxide so plants can grow using sunlight. This ecological interdependence shows enough divine design to inspire any honest thinker to consider a Creator, but a recently discovered interaction between pitcher plants and bats shows even more.1

Pitcher plants in tropical Borneo, the largest island in Asia, attract a particular species of bat to roost right inside their pitchers. The plants absorb nitrogen from the bat waste that drops to the bottom of the pitchers, and the bats enjoy comfy digs. Researchers already knew that pitcher plants in South American jungles grow flowers that attract bats for pollination, but the Asian version is unique. They give bats a safe place to roost during daylight hours. How do bats discern these preferred pitcher plants from the surrounding dense jungle foliage, and does the answer to that question help explain how this all might have evolved?

German specialists worked with biologists from Brunei, Borneo to track down the specifics on how pitcher plants attract bats. They published their results in Current Biology.2 The pitcher plants present concave reflectors that attract their bat buddies. Bats’ high-pitched sound waves bounce off the reflector, so it stands out against the drab-sounding jungle background. The pitcher’s sonic reflector has three other precise design features. 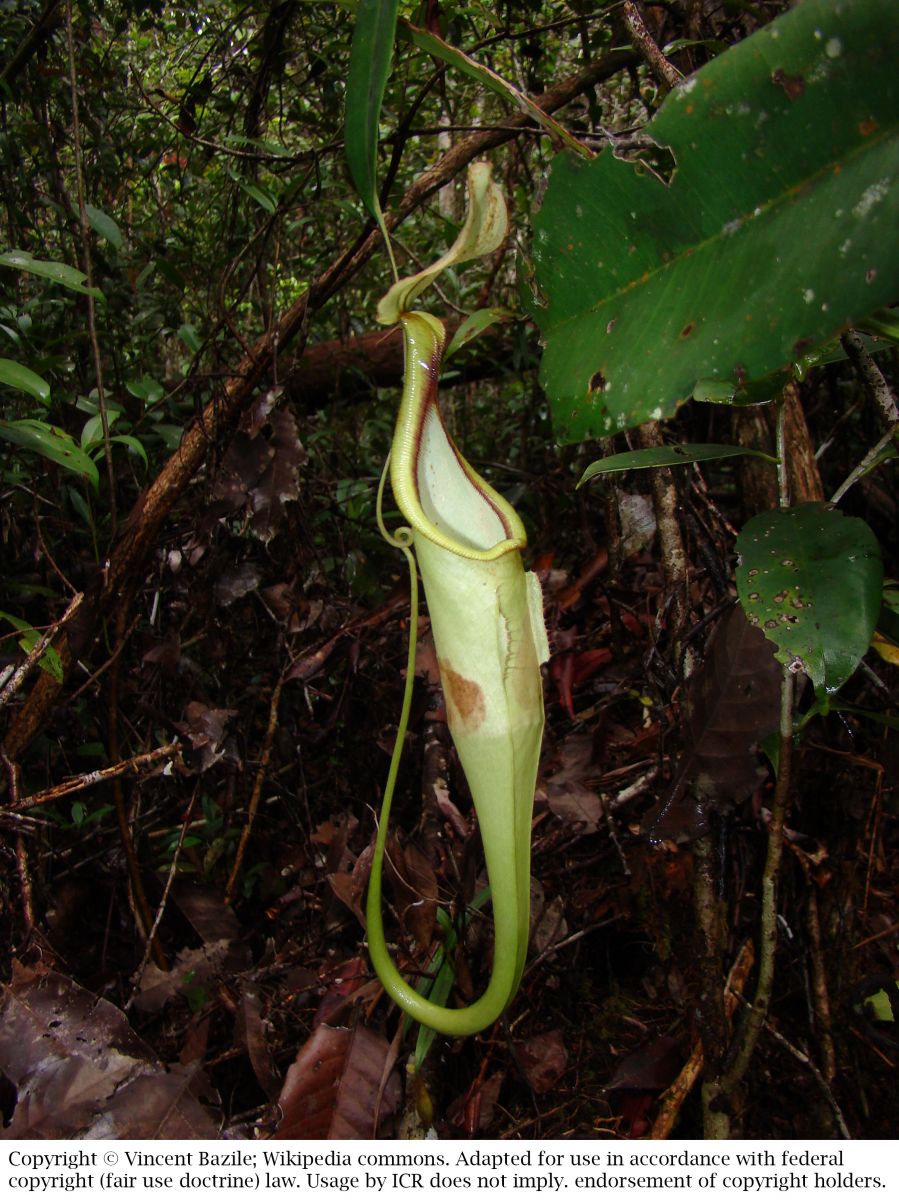 1. The plant’s reflector is situated just above the pitcher’s opening. To the bat, the reflector sounds very loud, but the opening below absorbs sound. The bats easily pick out this distinct contrast.

2. The area containing the reflector is larger than related pitcher plants that attract insects, increasing its sonic signal.

3. It reflects distinct sonic patterns on either side so that the bats can detect it from many angles.

The plant reflector’s size and side-reflecting patterns only work when a certain range of sound frequencies strike it. Of course, these exactly match the vocal range of these local bats, which happen to hold the record for highest frequencies of all bats so far measured. For more about animal sonar, watch our short video here.

How did all this interdependent fine-tuning happen? For a pitcher plant to construct the right size and shape reflector in the right place, it needs just the right building instructions in its DNA. And no number of high-pitched bat calls can somehow reach into plant-seed DNA and write new reflector construction code.

The Current Biology study authors wrote, “In the Neotropics, a few bat-pollinated plants found an efficient solution to attract bats by developing floral ultrasound reflectors, which enabled them to exploit the bats’ echolocation system.”2 But when is the last time a plant, animal, or any non-person willfully changed its DNA to solve an environmental challenge? Plus, how would these plants ever “know” about the benefits of bat guano’s nitrogen until after they already had fully formed bat homes to attract it?

The plants found no solution, developed no reflectors, and exploited no echolocation. People alone can perform these kinds of creative tasks, and the best example is the person of the Lord Jesus Christ, “For by Him all things were created that are in heaven and that are on earth, visible and invisible.”3