Charles Darwin bred many varieties of pigeons. Some had differently shaped head crests and others had unique color patterns in their plumage. Darwin tried to use these superficial examples of human-guided animal breeding to support his false idea that nature repeatedly transformed one basic life-form into another. 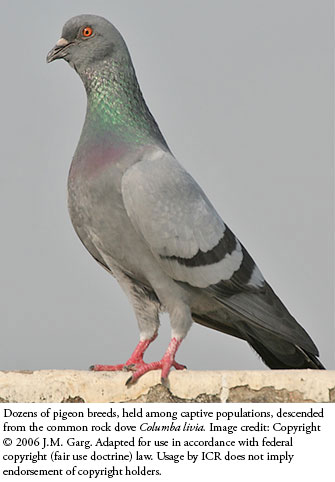 Today, over 350 breeds of the rock pigeon continue to showcase the plasticity of this bird's feathery features. A recent study traced modern pigeon origins, and although the evolutionary investigators told some of the same wrong stories that Darwin did, three key details from their work clearly support creation.1

The first detail relates to biogeography and the extensive comparison of DNA similarities showing patterns of pigeon migration, starting from the Middle East. The study appeared online in Science Express, and the lead author and University of Utah scientist Michael Shapiro said, "Some of those breeds only left the Middle East in the last few decades. They've probably been there for hundreds if not thousands of years. If we find that other breeds are closely related to them, then we can infer those other breeds probably also came from the Middle East. That's what we did."2

And that's exactly what one would expect if pigeons, like all other animals, descended and migrated from Noah's Ark, which landed in the Middle East near the middle of the world's livable land.3, 4 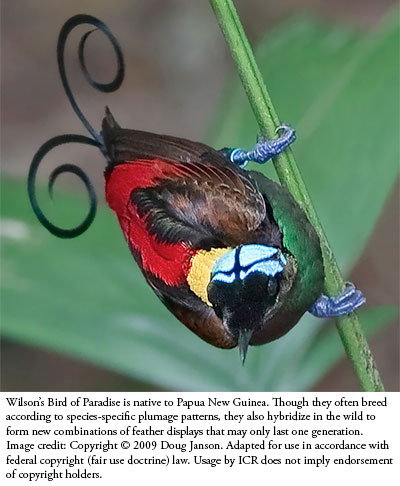 The researchers did not emphasize the second creation-corroborating detail. Though humans have bred rock pigeons into hundreds of varieties, the pigeons remain pigeons. As far as we know from pigeon breeding, DNA, and fossils, they have always been pigeons. This evidence contradicts the headline that Nature used in reporting this research, "Pigeon DNA proves Darwin right."5 It doesn't. Pigeon DNA gave no hints of relatedness to any other bird kinds, clashing with Darwin's claims that all birds share a common ancestor. The constancy of the pigeon-kind confirms the Genesis 1 account that God created "every winged fowl according to [its] kind"6 and the Genesis 7 account specifying that breeding pairs of bird kinds were required to board Noah's Ark.7

A third detail was the pigeon research team's discovery that a single "gene acts like an on-off switch to create a head crest when mutant, and no head crest when normal." The head crest, formed when feathers on the back of a pigeon's neck grow up instead of down, is a feature that adorns over 80 of the 350 pigeon breeds. "They found a perfect association between the mutant gene and the presence of head crests."2 This genetic switch has hallmarks of design, not random natural origins.

Unlike randomized natural processes, an engineer would have thought to make such a trait variation readily deployable by using a straightforward genetic mechanism like a small DNA change. Also, an engineer would have made it for a purpose. The University of Utah news acknowledged that, noting that head crests play a role in mate attraction. Future research may help determine if this is another example of a "mutation" that occurs by design.8

Many other interbreeding bird varieties generate spectacularly different traits that enable them to fill newly encountered environments and to glorify their Creator's sense of artistry.

These pigeon research details all fit with creation. Pigeons originated in the Middle East according to their genetics, corroborating the Flood account in Genesis. The pigeons the scientists studied show no signs of transmutating into any creature other than pigeons, because they breed "after their kind."6 And elegant, effective, functional genetic switches point to expert engineering.

Image credit: Copyright © 2013 University of Utah. Adapted for use in accordance with federal copyright (fair use doctrine) law. Usage by ICR does not imply endorsement of copyright holders.