According to a number of recent blogs on the Internet, on August 27, 2010, Mars made its closest approach to earth in history, coming within about 35 million miles. Some sites even predicted it would be as big and as bright as the moon. Don’t believe it! The report was a hoax. Last month Mars was about as far away as it could be, at a distance of some 186 million miles. The red planet actually made its closest approach to earth on August 27, 2003, but its appearance wasn’t nearly as big or as bright as the blogs claimed.

If Mars had appeared as large as the moon, which is impossible because of their relative sizes and distances, you would have been able to easily observe with the naked eye Valles Marineris, the Grand Canyon of Mars. However, you can still see it clearly by telescope, particularly when Mars is close. It is uncertain how this deep canyon was formed, but it appears that water flowed from the highlands near its western end to the lowlands to the north and east. The canyon is about 2,000 miles long, 400 miles wide, and five miles deep, with features typically present when water floods valleys and plains.

Figure 1 shows a map of a portion of the surface features of Mars. The red regions are at high elevations and the blue are in the lowlands. Note that Valles Marineris originates on the edge of a large crater and what appear to be flow features are present in the channel east of the canyon. Volcanic mountains are present west of the canyon and small craters occur over the entire surface. These craters are thought to have been formed as a result of asteroid and meteor impacts. The surface was also disrupted by volcanism and lava flows. Large amounts of liquid on the surface or in the crust were involved in these events. It is clear that major catastrophic processes have occurred on Mars in the past.1 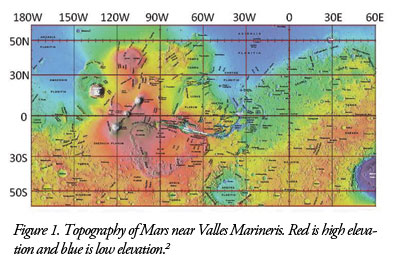 NASA views these features as evidence that water once played a major role on the planet some four billion years ago and could have provided a suitable medium for life to originate. Astronomer Danny Faulkner discussed the question of life on other planets in the October 2009 issue of Acts & Facts.3 A creationist view would be that life did not form over billions of years and that many of these geological features were probably formed at the time of the Genesis Flood on earth. If so, this would broaden the impact of the Flood to beyond earth and other parts of the solar system. We've known for a long time that the craters on the moon were formed by projectiles hurtling from space sometime in the past. The earth shows evidence of hundreds of such impacts as well--for example, Meteor Crater east of Flagstaff, Arizona. However, so much of earth's surface was reworked that only effects of the impacts near the end of the Flood were preserved. 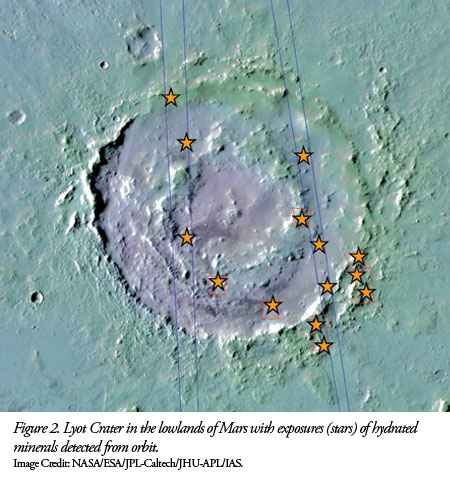 Some of the craters on Mars are now being used to determine whether rocks that were buried by thick layers of lava in the lowlands were affected by liquid water. Near the upper right-hand corner of Figure 1 at about 50ºN and 30ºE is the large Lyot Crater, shown enlarged in Figure 2. It is over 100 miles in diameter and was recently reported to contain rocks that formed in the presence of water. The center and edges of impact craters are typically composed of rock from miles underground that were brought to the surface by the impact.

A group of French and American scientists recently used the Compact Reconnaissance Imaging Spectrometer for Mars, an instrument on the Mars Reconnaissance Orbiter, to check 91 craters in the northern lowlands. The researchers reported that hydrated silicates in crustal outcrops from nine craters, including the Lyot Crater in the northern lowlands, indicate that wet conditions prevailed in the northern lowlands early on Mars.4 In at least those nine, they found clays and clay-like minerals called phyllosilicates, or other hydrated silicates that form in wet environments on the surface or underground. They now believe the water on Mars was global, not just confined to the southern part of the planet.

We agree that water on Mars in the past was probably global. We would not, however, agree that the water was present on the planet's surface four billion years ago. Its removal or transfer to the crustal rocks was more likely associated with the events of the Genesis Flood on earth a few thousand years ago. We also continue to be astounded that NASA and most of the conventional scientific community believe a catastrophe or a series of catastrophes removed the water from the surface of Mars, but that earth--which is now mostly covered by water--was not resurfaced by the global catastrophe described in Genesis. Geologic and other evidence continues to mount that the scriptural account of earth's history is accurate.