A New Creationist Cosmology: In No Time at All Part 1 | The Institute for Creation Research
Skip to main content

One of the issues that concern many people who wish to adopt young-earth creationism as a valid view of earth history is the question of how stars can be seen many millions of light years away if only a few thousand years have passed since they were created. Dr. Russell Humphreys, a previous researcher at ICR, spent years working on this problem and has developed a creationist cosmology that seems to resolve this question.

On the fourth day of creation, how long did it take God to make the stars and bring their light to earth? No time at all, according to clocks here on earth. That is what Humphreys concludes from his new creationist cosmology research. The cosmology presented in his 1994 book, Starlight and Time,1 had the light getting to earth in a finite amount of time, not instantaneously. The general features of that cosmology—a universe centered upon our galaxy, expansion of space, and gravitational time dilation—still appear to be correct. But Humphreys was never fully satisfied with its details because a) the solution did not provide enough time dilation for nearby stars and galaxies, and b) it was based on a metric—a solution of Einstein’s gravity equations—that was too complex to analyze fully.

A referee for a subsequent relativity paper Humphreys wrote insisted that he derive a new metric to support the paper’s conclusions. After several months of mathematical work, Humphreys found the solution and the Journal of Creation published his results.2 The article’s appendix contains the new metric and derivation. In a series of Acts & Facts articles, we will describe qualitatively the implications of this new metric and how it explains the cosmology of the creation events. 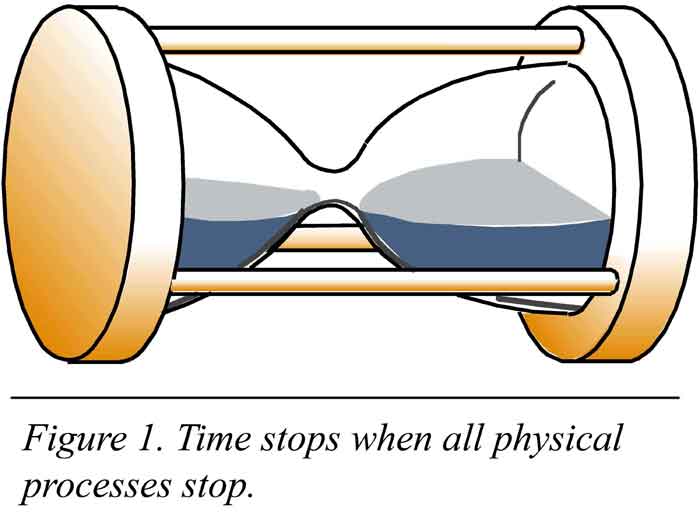 The new metric is not complicated, compared to many modern ones. Because it is simple and yet rigorous, it shows a feature of gravitational time dilation that nobody had noticed before. The feature was implicit in many previous metrics, but it had been obscured by the effects of motion. Humphreys calls this feature of time dilation achronicity, or “timelessness.” It causes clocks and all physical processes—hence, time itself—to be completely stopped in a region that could be very large. This is in contrast to the time dilation around a black hole, in which time is completely stopped only at a certain exact distance from its center, at the “event horizon.”3 In his 2008 article, Humphreys showed how this new metric led straightforwardly to achronicity. In the last five pages of the paper, he applied the time dilation achronicity to develop a new creationist cosmology.

The first step in understanding this new cosmology is to recognize that space is not empty. Both science and Scripture strongly imply that space is a solid material that we cannot see or feel, though quantum field theory suggests it is extremely dense.1 We move freely through it and it moves freely through us.4 See Scriptures like Isaiah 40:22: “[God] stretches out the heavens like a [tent] curtain” (NASB), and 16 other similar verses.5 These verses invite us to compare the material of space to a stretchable fabric under tension,6 like that in a trampoline.

Next, think about the space we live in. It appears to have only three dimensions, or directions—length, width, and height. Lay a piece of typing paper flat on a table. It is 8.5 inches wide by 11 inches long, but it is only 0.003 inches thick. It does not occupy much of the height direction at all. Now roll up the paper like a scroll. You used the third dimension, height, in the air above the table to roll it up, and the thinness of the paper allowed you to do so. So if an object is thin in one of its dimensions, you can roll it up. But here is an amazing thing—Scripture says the same thing about the heavens:

And the heavens shall be rolled up like a scroll. (Isaiah 34:4, NKJV) 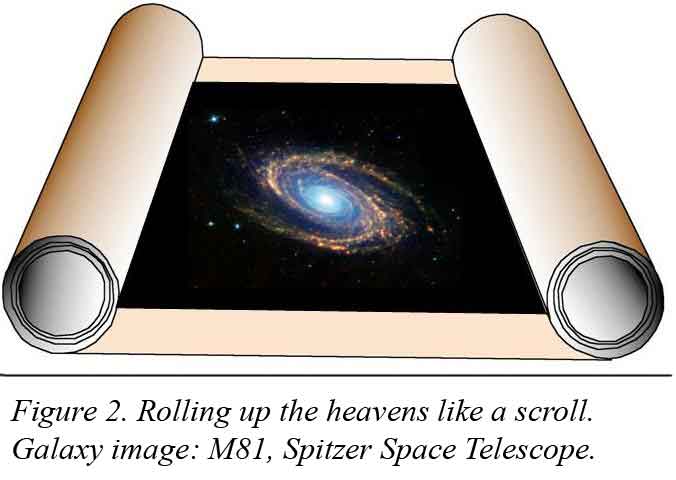 The context here is the “host of heaven,” which includes the stars, and “the heavens.” This is the space that contains the stars. Here again, God depicts the heavens as a material that He can manipulate. In the three directions we can see, the heavens are very thick. Yet God says He will roll them up like a scroll.7 That implies that the heavens are thin in a fourth direction that we cannot see. Moreover, there must be more room in that fourth direction that allows the rolling up to occur. The future tense of this verse implies that the heavens are not in a rolled-up condition at present. In the fourth dimension that we cannot perceive, space is flat, like an unrolled scroll or cloak.8 The three dimensions we can see would exist as a thin sheet within a larger four-dimensional space, which some physicists call “hyperspace.”9 As Humphreys pointed out in Starlight and Time,10 the extra dimension makes sense of the equations of Einstein’s general theory of relativity by giving room in which the “spacetime continuum” can be bent.11

The Analogy of the Trampoline 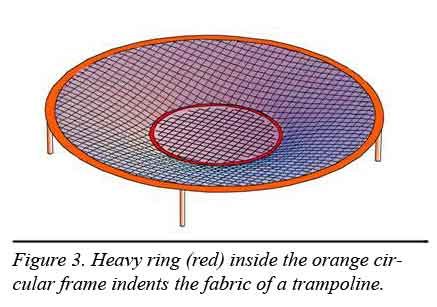 So, if the heavens are thin in one dimension, and like a stretchable fabric under tension, we can compare them to the fabric in a trampoline. Put a heavy ring inside the circular frame on the trampoline. Notice that the weight of the ring makes a dent in the fabric of the trampoline, as in Figure 3. In just the same way (but with more dimensions), Einstein’s gravity equations say the presence of a mass bends the fabric of space.12 For dents that are not very deep, this picture also fits Newton’s gravity equations.13

The slope of the fabric is proportional to gravitational force. If we put a marble on the sloped part, it will roll inward toward the ring. Notice that if we put the marble inside the ring, it sits in a flat region and does not try to roll anywhere. This corresponds to the fact that in both Newton’s and Einstein’s gravity equations, the gravitational force is zero inside an empty hollow sphere.

The depth of the dent at any given point is proportional to the gravitational energy14 at that point. Inside the ring, all points are at the same depth below where they would be if we had not put the ring on the trampoline. This corresponds to the fact that in both Newton’s and Einstein’s equations, particles inside a hollow sphere of mass have a lower15 gravitational energy than they would if the hollow sphere did not exist.

The First Day of Creation

Now that we have the trampoline analogy in place, we are ready to understand some of the gravitational implications of creation. Recall that Genesis 1:2 mentions water:

Notice “the deep.” Its mass was on the order of twenty times that of all the galaxies within the viewing range of the Hubble space telescope.14 This was probably ordinary liquid H2O and would have been in the shape of a ball a few light years in diameter. If Newton’s gravitational constant G had the same value then as now (not necessarily true), all of the water would be well within the event horizon of a black hole. 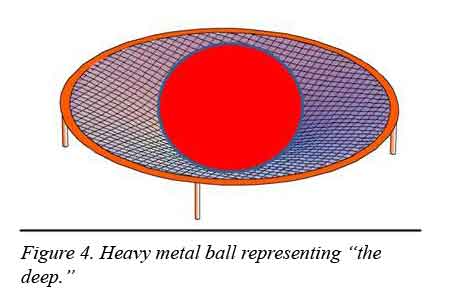 Now, replace the ring on our trampoline with a heavy metal ball to represent “the deep.” The ball would make a large dent in the fabric. The slope of the fabric around the ball is steep, meaning gravity would be strong around “the deep.” Conditions would be complicated, and probably beyond our present understanding of physics. But, we can say that almost certainly time dilation was taking place. One ordinary-length day of time passed during which time the ball would have contracted due to gravity. But, the speed of light would limit its contraction to a few percent of the overall diameter.16

The Beginning of the Second Day of Creation

At the center of “the deep,” God marked off a relatively small spherical region of water. He marked it off with a thin region of space (empty to our perceptions, but really a material) that He called “the firmament,” or in other translations “the expanse” (Genesis 1:7). The Hebrew word raqia suggests something solid that was spread out, such as the bronze hammered thin and spread over the altar of sacrifice (Numbers 16:38). The raqia is understood to consist of the same dense, intangible, and invisible material that was mentioned above, the fabric of space. Above the raqia were the rest of the waters of the deep. Above the waters was more empty space (empty to our perception, but again a material) extending out many billions of light years.16

We are now ready to describe the most interesting events that permit light to get from the stars to earth in only a few thousand years. Humphreys suggests that an expansion occurred, adjusting the critical potential and conditions inside and outside the mass on our imaginary trampoline. Hence, a region of timelessness would have expanded outward from earth through space, allowing physical processes and events in the outer reaches of our cosmos to proceed while clocks on earth stood still.

This cliffhanger of a story will be completed in future articles. They will address the events of the remaining days of creation and following. The timeless zone, gravity, and the speed of light interact to allow light to reach earth in a “short” period of time.

* Dr. Vardiman is Senior Research Scientist, Astro/Geophysics, at the Institute for Creation Research, and Dr. Humphreys is Retired Associate Professor of Physics.