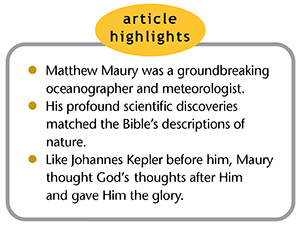 Today’s oceanography and meteorology owe a great debt to Matthew Maury. He exemplified the biblical principle that whatever we do, we should do it “to the glory of God” (1 Corinthians 10:31). Maury’s scientific research revered God’s Creatorship while benefiting his fellowman.1

On a monument erected by the state of Virginia to his memory is found a plaque that reads as follows: “Matthew Fontaine Maury, Pathfinder of the Seas, the genius who first snatched from the oceans and atmosphere the secret of their laws. His inspiration, Holy Writ, Psalm 8:8; Ecclesiastes 1:6.”2

I have been blamed by men of science, both in this country and in England, for quoting the Bible in confirmation of the doctrines of physical geography. The Bible, they say, was not written for scientific purposes, and is therefore no authority in matters of science. I beg pardon! The Bible IS authority for everything it touches.1

As a child, Maury was taught the Psalms at home, and that divine book of praises imprinted upon his intelligent, investigative mind. Decades later Maury would live out his lifelong commitment to doxological creation science.4 Maury recognized the Holy Bible as perfect in whatever it taught, including being authoritatively relevant and accurate in scientific matters.1,4 Among the insights he gleaned are:

Maury trembled at the privilege of uncovering the logic God carefully built into His creation, noting that scientific discovery is discovering God’s own mind.

As a student of physical geography, I regard earth, sea, air, and water as parts of a machine, pieces of mechanism, not made with hands….And when, after patient research, I am led to the discovery of one of these [mechanisms], I feel, with the astronomer of old [Johannes Kepler], “as though I had thought one of God’s thoughts,” and tremble. Thus, as we progress with our science, we are permitted now and then to point out here and there in the physical machinery of the earth a design of the Great Architect when He planned it all.6

Virginia’s monument to Matthew Maury reminds us of his historic testimony and scientific achievements. The more important “monument” to his godly work is the ongoing impact of Maury’s life of reverent research in God’s service, which has secured for him “treasures in heaven” (Matthew 6:19-21).