The Federal Aviation Administration (FAA) is quite serious about flying safety. If an aircraft crashes, the FAA will conduct an investigation called a Root Cause Analysis. This involves methodical detective work that tracks events from the moment of the crash back in time. Flight and voice data recorders are invaluable to the inquiry. Root Cause Analysis identifies the most obvious problem that led to the crash and then lists the problem’s cause. That cause is then treated like a problem in itself, and the cause for its occurrence is investigated. This cycle is repeated until the very first cause is discovered. Finding that initial problem, the root cause, helps prevent similar crashes in the future.

It would seem completely irrational if these problems weren’t fixed in future airplanes and were somehow accepted as just a fact of flying. Amazingly, evolutionary theory tolerates a built-in root-cause problem: fossil forgery.

One frustrated evolutionary paleontologist vented his feelings after a highly publicized “missing link” was exposed as yet another hoax.

Red-faced and downhearted, paleontologists are growing convinced that they have been snookered by a bit of fossil fakery from China. The “feathered dinosaur” specimen that they recently unveiled to much fanfare apparently combines the tail of a dinosaur with the body of a bird, they say. “It’s the craziest thing I’ve ever been involved with in my career,” says paleontologist Philip J. Currie of the Royal Tyrrell Museum of Paleontology in Drumheller, Alberta.1

Currie is referring to an embarrassing major evolutionary blunder linked to a fossil forgery. This time it involved Archaeoraptor liaoningensis (“ancient bird of prey from Liaoning”), featured in the 1999 National Geographic article “Feathers for T. rex?”2 After this fraudulent fossil was exposed, commentators pointed out similarities with the notorious Piltdown Man hoax.3 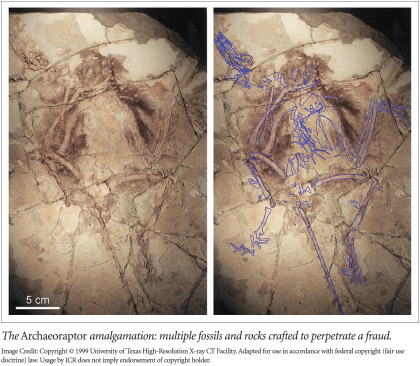 Scientists still don’t know how the Archaeoraptor specimen was smuggled out of China and ended up in the United States. We do know that in 1998 Stephen Czerkas, curator of the Dinosaur Museum in Utah, purchased it for the tidy sum of $80,000. Czerkas labored with Xu Xing of China’s prestigious Institute of Vertebrate Paleontology and Paleoanthropology and Phillip Currie to study the specimen. The National Geographic Society sponsored the project.

Archaeoraptor’s debut was accomplished with widespread publicity. National Geographic’s November 1999 press release used language remarkably similar to other fossil forgeries—such as the 1913 description of Piltdown Man and the 2009 description of Ida, a lemur-like animal thought to document human evolution.3 In the Archaeoraptor press release, Czerkas states, “It’s a missing link that has the advanced characters of birds and undeniable dinosaurian characters as well.”4

The National Geographic Society has since pulled that press release from their website, but ICR geologist Steven Austin captured the release’s salient points in a contemporaneous Acts & Facts article in 2000. He states,

The turkey-sized animal according to National Geographic “…is a true missing link in the complex chain that connects dinosaurs to birds. It seems to capture the paleontological ‘moment’ when dinosaurs were becoming birds.” According to their press release, the anatomy of Archaeoraptor proves a feathered theropod dinosaur was capable of flight. The features include: “…a very advanced, birdlike shoulder structure, wishbone and big sternum—all indicating the animal was a powerful flier. Remains of feathers surround the specimen’s bones. Yet its tail was strikingly similar to the stiff tails of a family of predatory dinosaurs known as dromaeosaurs, which includes the ‘raptors’ of Jurassic Park.” Several remarkable characteristics are noted. “This mix of advanced and primitive features is exactly what scientists would expect to find in dinosaurs experimenting with flight,” and, “It’s a missing link between terrestrial dinosaurs and birds that could actually fly.”4

Just like the Piltdown Man blunder, these evolutionists saw what they wanted to see. Unfortunately, their strong belief in dinosaur-to-bird evolution led to mental images that overcame the empirical data. A Chinese craftsman apparently made a fossil to match their imaginations!

Based on nothing more than a mental visualization of what they already believed, the National Geographic article made the definitive pronouncement, “We can now say that birds are theropods just as confidently as we say that humans are mammals. Everything from lunch boxes to museum exhibits will change to reflect this revelation.”5 Within months, paleontologists showed that Archaeoraptor was the upper body of a bird literally glued to the legs and tail of a dinosaur.6

It is enlightening to observe the rapid sequence of events surrounding Archaeoraptor. All of us can empathize with someone getting carried away with excitement. But how could a whole team of scientific researchers demonstrate a wholesale lack of cautious judgment?

Gould writes that paleontologists use “a set of procedures for making strong inferences about phyletic [evolutionary] history from data of an imperfect record that cannot, in any case, ‘see’ past causes directly, but can only draw conclusions from preserved results of these causes.” They explain the past through “large scale results by extrapolation from short-term processes…[and] extrapolation to longer times and effects of evolutionary changes actually observed in historic times (usually by analogy to domestication and horticulture).”7

Of course, the “longer times” that Gould envisions are enormous, as is the amount of imagination needed to fill the gaps. Thus, Charles Darwin unashamedly invoked imagination—as do leading evolutionists like Richard Dawkins and Jerry Coyne. Yet these scientists imply that creationists suffer from far too little scientific imagination.3

This helps explain how evolutionists can merely look at fossil bones and see “transitional” features, or look at an odd fish from the ocean depths and see “primitive” features. Since imagination is a fundamental element of evolutionary theory, the blunders that accompany it will continue.

National Geographic published a few details of how they were duped. They write,

The tail and hind limbs were identified in 2000 as belonging to a Microraptor zhaoianus, a small, bipedal, meat-eating dinosaur with some bird-like features...[while] the avian parts of the false dinosaur-bird fossil are from one specimen, a fish-eating bird known as Yanornis martini….Yanornis had advanced features approaching those of modern birds, and strong flying abilities.8 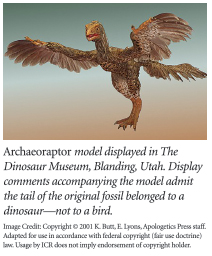 Imagination enables evolutionists to see both Microraptor and Yanornis somehow evolving into “modern” birds with “advanced” features. Unfortunately, the criteria for “primitive,” “advanced,” and so on reside only in imagination.

ICR Science Writer Brian Thomas recently documented that, in spite of Czerka’s Archaeoraptor blunder, the cycle continues with other fossils.

In 2002, Czerkas and his wife self-published a book called Feathered Dinosaurs and the Origin of Flight in which they discussed Scansoriopteryx in context of dinosaur evolution into birds. His stance on Archaeoraptor as a real fossil did a complete flip-flop shortly after its exposure as a fraud, and now his stance on Scansoriopteryx as a dinosaur has reversed as well.9

On the same topic, Thomas also reports on some major anatomical barriers for dinosaur-to-bird evolution.10

Obviously the FAA and evolutionists handle root cause problems quite differently. The root cause of being duped by fossil forgeries is the need for evolutionists to fill substantial time gaps with imagination. So, in spite of the fact that birds have only been observed to reproduce other birds, evolutionary imagination spawns an eternal optimism of finding a “missing link” that may make researchers gullible to forgeries. One evolutionary paleoanthropologist admitted, “We have only to recall the Piltdown adventure to see how easily susceptible researchers can be manipulated into believing that they have actually found just what they had been looking for.”11

It’s valid for a scientist to ask, “How much of the evolutionary story, from its evidence to its mechanism, is only an extrapolated mystical mental construct?” This question is also somewhat of a warning. Once these mental constructs take on a life of their own by getting swept into the day-to-day evolutionary rhetoric and literature, everyone dealing with these imaginary concepts may tend to begin treating them as if they were real.

Image Credit: Copyright © 1999 O. Louis Mazzatenta/AP/National Geographic Society. Adapted for use in accordance with federal copyright (fair use doctrine) law. Usage by ICR does not imply endorsement of copyright holder.