Several years ago, it became obvious that ICR had outgrown its present facility. Completed in 1985, it housed office space for about 60 full-time faculty and staff, graduate school classrooms, research laboratories, library, book warehouse, and shipping room. Since then, we have found it necessary to rent space in nearby buildings for ever-expanding functions.

Beginning in the early 1990s, we mentioned the need for additional space in Acts & Facts and encouraged ICR friends to designate gifts for that purpose, if that was their desire. Funds collected were faithfully applied to the building fund, waiting for God's supply.

ICR has a long-standing policy that it will not go into debt. Our present building was constructed debt-free, with all glory to God. He is pleased as His children follow this principle.

As funds came in, we purchased the lot adjacent to ICR and waited. In His time, full funding was received early in 1999, and we prayerfully authorized the architect to draw up plans. With full payment in hand, we planned to break ground in July, but building permit delays ultimately pushed it back into November. 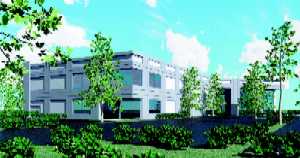 The new building will bring together all functions now housed in other locations, thus saving a monthly outlay for rent. The shipping room and warehouse will be there, from which creationist materials will be sent worldwide. And since an office building is not really the best place for scientific laboratories, they will be moved there also. Look for significant discoveries to come from the work accomplished in them. Several new classrooms will be there too, adjacent to the labs.

There's only one hitch. Between the time contracts were signed and the date for construction to begin, we found out why the permits had been delayed. The city was implementing new earthquake codes, and construction costs jumped 15%. Suddenly we were nearly $200,000 short. Delay was impossible without additional penalties.

The ICR administration and Board has decided to go ahead on schedule. This will not entail going into debt—we will not do that—but it does mean that between now and the projected April completion date, additional designated monies must be received, or the rest must be taken from other areas of the operating budget.

I mention this because ICR needs your help. At each year end, we ask for extra help in finishing the year in the black and preparing for many expenditures in the months ahead. And each year, friends of ICR have responded with each need met, and always without debt. Thus, these are uncharted waters for us.

As you know, ICR never resorts to high-pressure "fund raising." We choose to simply inform people of the vision and the need, and ask them to respond as God leads. So with this "mention," let me ask that you please help if you can.

* Dr. Morris is President of ICR.