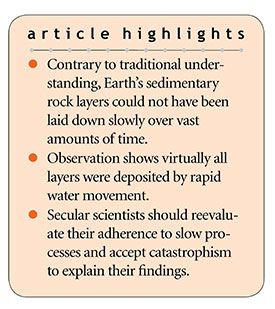 Secular science has long taught that sedimentary rocks were deposited slowly over vast ages, but what does the research show? People are indoctrinated with the notion that enormous periods of time are necessary to explain rock layers. However, empirical evidence demonstrates this is false.

For example, clay, the most common sediment on Earth, doesn’t slowly settle out of still water to form rocks. It must be deposited in energetic settings by moving water.1 These results match the predictions of creation geologists, who interpret clay, the resulting mudstones and shales, and nearly all sedimentary rocks as rapid deposits that occurred during the year-long Flood.2

A second finding has uniformitarian geologists scratching their heads. A groundbreaking paper shows that lime mud (micrite) is also deposited by moving water and not in a slow-settling process as previously thought.3 Although some lime-rich mud rocks called carbonates have been interpreted to form in high-energy settings such as fossil-rich zones and aggregate particles, carbonate mud has always been thought of as forming in “quiescent ocean settings.”4

The global Genesis Flood was responsible for most of the rock “history” of all the continents on Earth.

Carbonates comprise 20 to 25% of the total sedimentary strata and can be quite thick. The Redwall Limestone in Grand Canyon is 400 to 800 feet thick, but some carbonates can exceed 3,000 feet.4 Carbonate rocks also contain about one-third of the world’s oil deposits and are an important source of construction materials.4

The concept of slow-forming limestone strata has been taught as fact for so long it’s ingrained in countless students’ minds going back for generations. Uniformitarians have used the presence of these rocks to criticize the biblical Flood account, pointing out that thick deposits of “quiet water” carbonates must have taken millions of years to form.

But all that has changed, and this long-held belief is now shattered. Flume experiments have verified that carbonate mud isn’t deposited slowly but rapidly by wave and current action.3 Laboratory experiments demonstrate that water flowing between 10 and 20 inches per second creates ripples and laminated carbonate mud layers identical to those observed in carbonate rocks.4

According to the study authors, “These experiments demonstrate unequivocally that carbonate muds can also accumulate in energetic settings.” They added, “Observations from modern carbonate environments and from the rock record suggest that deposition of carbonate muds by currents could have been common throughout geologic history.”3

Unfortunately, secular scientists deliberately forget that the global Genesis Flood was responsible for most of the rock “history” of all the continents on Earth (2 Peter 3:5-6). And conditions during the Flood were anything but quiescent! Catastrophic water currents from many directions clearly washed across the continents in tsunami-like fashion, as described in Genesis 7:19: “The waters prevailed exceedingly on the earth, and all the high hills under the whole heaven were covered.”

Carbonate muds were a large component of the sediments deposited by the rapidly flowing floodwaters. Secular scientists have again had to back away from their strict adherence to uniformitarianism and become more accepting of catastrophism to explain their findings: “The observations we report suggest that published interpretations of ancient lime muds and derived paleoceanographic conditions may need to be reevaluated.”3

This study affirms the biblical Flood as a historical event.

This study affirms the biblical Flood as a historical event. We can be assured that the thousands of feet of sedimentary rocks found across the continents stand as powerful empirical evidence against generations of uniformitarian dogma. Sandstones, mudstones, and carbonate rocks were deposited rapidly, not slowly, attesting to the power unleashed on the world during the Genesis Flood.