Editor’s note: Prominent San Diego engineer and industrialist Lee Huntington was an ICR Board member for over two decades. This article describes his creation journey. 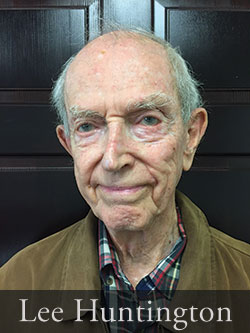 Lee Huntington graduated from high school in time for the United States’ entrance into World War II. He helped build B-24 bombers at Convair in San Diego, but at the war’s end he was eager to continue his education. He especially wanted to be a mechanical engineer and chose to attend the University of California in Berkeley, which had a great science reputation.

As someone intent on entering the science research education field, he wanted to make sure everything he studied was true and accurate. He was also determined that nothing in his studies would be based on conjecture—everything must have an accurate foundation. Science and truth, he felt, should be close companions.

During the early days of his time at the university, Lee volunteered to work on various science experiments. His first project was directed by Dr. Ernest Lawrence, a Nobel Prize winner in physics and a professor at Berkeley. Other volunteer assignments were in the field of thermodynamics, one of which was to measure the heat transfer and design in special refrigerated boxcar walls.

Science and truth, he felt, should be close companions.

After Lee graduated with his mechanical engineering degree, he served a tour in the U.S. Marines. At the tour’s conclusion, he moved back to Berkeley with the goal of a master’s degree in science. His work focused on better measurements for the human body’s comfort in dealing with radiation and convection.

Lee moved to Los Angeles and began work in engineering design for commercial air conditioning. The manufacture and use of this equipment was fairly new at the time. He later relocated to San Diego to start his own engineering business. The new venture often offered challenges. One such challenge involved working with British Petroleum (BP) on Alaska’s North Slope in Prudhoe Bay. Lee’s company was given the task of helping build power plants.

An interesting event occurred while Lee was up on the North Slope. The BP chief engineer gave him a handful of wood chips. He said workers had discovered them as they drilled up to 15,000 feet under the icy ground surface. Sometime later, Lee met Dr. Henry M. Morris in San Diego, and he told Lee those wood chips were likely from the Ice Age.

There is a vacuum of creation information in our country and in our world.

With his keen interest in science, Lee was determined to gain a greater understanding of the creation story. He attended a presentation by Dr. Walter Lammerts, a scientist and president of the Creation Research Society and a leader in the representation of scientific creationism. In 1970, this thoughtful Ph.D. introduced Lee to a book called The Genesis Flood by Dr. Henry M. Morris and Dr. John Whitcomb, and eventually Dr. Lammerts introduced him to Dr. Morris.

A short time after that meeting, Lee and his lovely first wife, Alice, attended a college-level course taught by Dr. Morris. This class was all about science and the worldwide Flood as described in Genesis. Dr. Morris had been the head of the Civil Engineering Department at Virginia Polytechnic. This university was and still is one of the top engineering schools in our country. Dr. Morris was a very skilled and intelligent teacher. What a privilege it was for Lee and his wife to attend a Genesis class under him. What students learned in the class led them to examine age dating and other important questions and helped them begin putting together science and the creation story.

“Purpose in life” had always been an important consideration for Lee, and he searched for other respected scientists with different specialty skills who had been studying the same questions. He ran into many like-minded scientists who were extremely helpful in his quest.

Christian churches and schools need to be taught biblical creation.

One day in the early 1980s, Lee joined Dr. Henry Morris and Dr. Henry Morris III for lunch in El Cajon, a city in San Diego County. They asked Lee to join the Board of Directors of the Institute for Creation Research.

Lee continued to read all of the literature he could find on creation from a biblical and scientific point of view. In joining the ICR Board, he would meet men from all over the world who shared this belief. More and more young people were coming into the fold—accepting and studying the idea of creation as being a reality. This direction was a monumental change in the standard scientific belief system. Could our world be a much younger world (a newer creation) than was previously thought?

Lee was now faced with the same dilemma that Dr. Henry M. Morris had when he was a smart young graduate. What is the real truth for us as science students? In Lee’s own words:

There are two laws of thermodynamics. These two laws have been accepted by science for many years. They were introduced to me during my engineering classes at U.C. Berkeley, and these laws seemed to conflict with old-age teaching. We were told that our universe was so very old, and now perhaps we were mistaken. The second law tells us everything is running down—especially the availability of energy. Everything had been young at some point as described in Genesis, and now there appears to be an end point that is sooner than we had been led to believe.

Does the Bible give us a real history of our civilization? More than that, isn’t it likely that its history is written by a Master Teacher—our very scientific Creator? Was our Lord the real Master Designer, Creator, and Engineer, or do we toss this aside?

Dr. Henry M. Morris III and his team of world-class scientists have taken a big step in helping churches and schools understand creation. Many of us have now come to embrace what we believe is the most accurate explanation as to who we are and where we are going.

The whole Morris family is dedicated to carrying this banner into the future. Dr. Henry Morris III, ICR’s CEO, assisted by his brother, Dr. John Morris, is carrying on the leadership for this mission. There is a vacuum of creation information in our country and in our world. I believe our Christian churches and schools need to be taught biblical creation as the most accurate explanation for new young scientists and for the advancement of our churches and school systems.

My commitment is to continue to help carry this banner and support ICR.