The ancient and elaborate temple at Angkor Wat is not the only interesting site to see when visiting Cambodia. Archaeologists have been discovering hundreds of temples, many still buried beneath thick jungle growth, strewn across the whole surrounding area. A picture is emerging of buildings that connected a thriving society across a broad region. Could soon-to-be uncovered stone carvings somehow intersect with biblical history?

Evans told Australian news source The Age that with lidar, "all of a sudden we saw an immediate picture of an entire city that no one knew existed."1 Even the local villagers had no idea that an ancient temple lay virtually beneath their feet.

The temple at Ta Prohm—with its tree root-draped stones providing a picturesque scene for visitors—lies fewer than three miles from the oft-visited major Angkor Wat complex. The Khmer people built it and the many surrounding temples during Europe's Middle Ages. 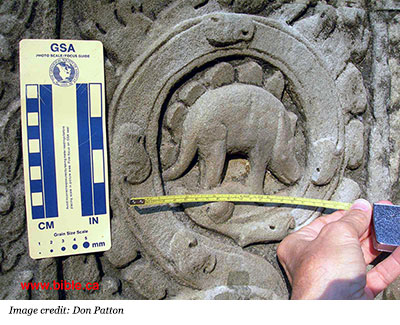 Ta Prohm is increasingly famous for its bas-relief of what appears to be a stegosaur, expertly carved into the temple stone many centuries ago—long before paleontological dinosaur reconstructions. Ta Prohm's central stele carving shows a date, translated onto the A.D. calendar, as 1186.2 Parrot, swan, water buffalo, and monkey carvings adorn the same structure, showing the ancient artist's expertise at reproducing known animals.

The nearest stegosaur fossils come from faraway China. It is therefore very unlikely that the ancients carved a stegosaur likeness based on fossils.

Dinosaur carvings, sculptures, and paintings within ancient ruins confront the view that dinosaurs lived and died millions of years before man.3 But they are just what one would expect within the context of biblical history. Genesis says that God created man and animals, including dinosaurs, on the same day of creation week.4

Did the ancient Khmer people personally observe stegosaurs, as the anatomically-correct rendering at Ta Prohm clearly suggests? If so, then those dinosaurs represent descendants of their kind that traveled on board Noah's Ark. This implies that later generations of stegosaurs migrated from the Ark landing site in the Middle East to Southeast Asia. They may have gone extinct from Cambodia through human interactions similar to those causing the 2010 extinction of the Javan Rhino from neighboring Vietnam.5

The next task for archaeologists will involve carefully removing the covering jungle from Mahendraparvata's ancient stone walls. Erected centuries before Angkor Wat, will its temple carvings reveal more dinosaur-looking creatures? And if so, will secular researchers choose to show findings that challenge their basic beliefs, or will they suppress evidence as they cling to secularized history?

How to Take a Stand for God
"But Daniel purposed in his heart that he would not defile himself with the portion of the king's meat, nor with the wine which he drank: therefore...
BY: HENRY M. MORRIS, PH.D.
More Creation Science Update

Not-So-Simple Plankton
Plankton is a generic term for small marine creatures such as algae, bacteria, and protozoa. Although tiny, they are packed with incredibly intricate...
BY: FRANK SHERWIN, M.A.
The Latest
NEWS   ACTS & FACTS   PODCASTS