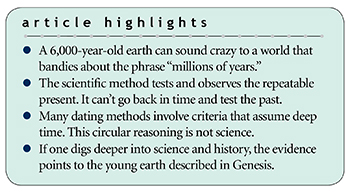 A creation-believing friend of mine attended a dinner with various scientists. One of them who favored intelligent design said that any scientist who believed in a young earth was “crazy.” Then, remembering one in his audience, he turned to my friend and said, “No offense.” The reply came, “None taken!” This brief banter illustrates popular scorn for belief in a 6,000-year-old world. Can recent creation sound remotely rational in a climate so soaked in millions-of-years thinking?

The 6,000-year estimate comes from counting the number of years the Bible gives between various events from creation to Christ. This view of history is called recent creation. In contrast, the world’s way of thinking denies creation from the get-go. It needs millions of years, called deep time, to imagine creatures evolving from goo to you.

Many trails lead toward recent creation. Take the limits of science, for example. Some scientists think that science can firmly answer questions about the past. But it can’t. Science directly tests only that which is observable and repeatable. History is neither. The best science can do is weed out unlikely scenarios.

For example, scientists can measure isotope ratios in a rock, but those numbers must be cranked through a formula that includes unknown, unmeasurable variables to output a time estimate. Secularists make sure those variables receive deep-time-friendly values. They assume the rock’s starting state and that no outside process tinkered with the ratio since the rock hardened long ago. Then in a crazy twist, they often invoke special starting states of rocks or outside tinkering to explain out-of-place isotope-based age estimates.1

Since science fails to pinpoint historical events, how can we know when past events happened? Simple—we consult those who were there. We read what they wrote.2 And it turns out the Bible is the ultimate history book. Not only did eyewitnesses write or help write it, but God Himself carried the prophets and apostles along as they or their associates penned the Word of God.3 Recent creation isn’t crazy. It uses the most reliable record around. Trusting in science to answer all our questions about the past is the crazy option.

If one digs deeper into science and history, the evidence points to the young earth described in Genesis.

Besides all this, natural time clocks from many disciplines help confirm biblical creation. ICR.org has dozens of articles that describe everything from an abundance of blue stars,4 helium in minerals,5 and soft tissues in fossils,6 to a scarcity of creature mutations.7 Even these science-based observations cannot pinpoint history, but they do weed out deep-time options. Misplaced faith in science, a lack of logic in secular arguments, natural time clocks, and the very Word of the Creator all lead to recent creation.